Breaking Nurgle's Siege: a modest proposal for Back from the Lead

The first the burghers knew of the siege was when they realised that supplies of luxury Cathayan toilet paper were running low. 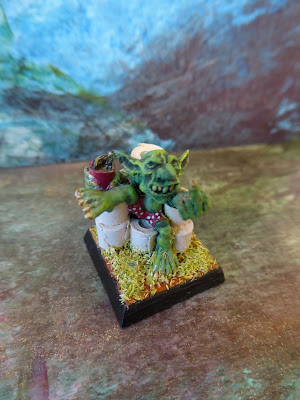 Little did they realise the full magnitude of the chaos and pestilence that had gripped the town... It is now day 36 of the siege and toilet paper shortages are the least of the townsfolk's worries. Yet a band of the brave and desperate seek to break the siege. In the face of plague and disease, to bring hope once again.


First off, I hope you like the only thing I've actually managed to paint during the lockdown! (Would like to paint more, but I've actually had to be working harder than before.) I call him Bogroll, Raider of the Lost Supermarket! A delightful sculpt from Fox Box to mark these strange times.

But I come to you today not just to show him off, but rather to take up a suggestion from notable Oldhammerer and manically overproductive painter Harry Howells, who proposed the following:
"Back from the Lead ... I think we should all look forward to a time when lockdown restrictions are eased and the situation imporves to the point that we can get back together again. The weekends I have spent at the Foundry have been some of the best times I have had ... sharing some great games with some of the finest folks you could hope to meet. This would really give me something to look forward to, things being as they are. Who else would be interested in a special get together at the Foundry .... when it is sensible to get together again?"*
*Please note, Harry is still smarting from when nicked his "Night of the Living Lead" idea many moons ago and so has claimed copyright in all jurisdictions over "Back from the Lead", all rights reserved. As I don't want to get in trouble with his lawyers, I'd like to say that all credit and indeed blame for the name and the idea lies with him.

Now I will use any excuse to get to the Foundry, so as soon as the lockdown is over and it's deemed safe for us to travel and gather, count me in. The discussion then turned to ideas about the kind of game we should have:
Paul Ede: Massive tabletop battle..everybody against Nurgle
Steve Beales: I feel the breaking of a siege might be a good theme to base the game on - Sally forth!
In a flash of originality and, let's face it, genius, I thought: why not steal these good ideas, stick them together, and call it my own idea?

And so I present to you a modest proposal: that the central game at Back from the Lead (event name copyright Harry) should be the breaking of a siege of Nurgle and the forces of plague and pestilence. 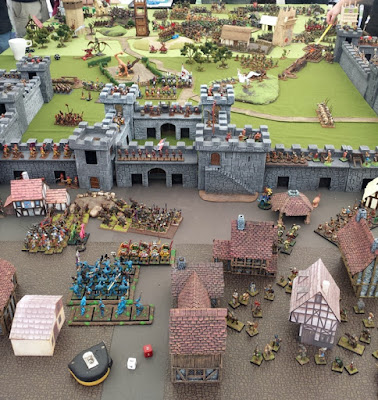 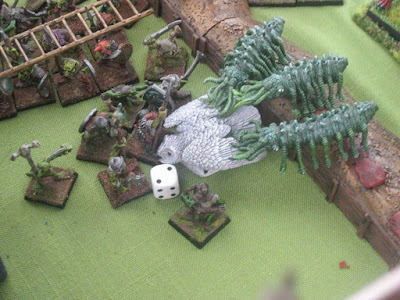 But wait? Aren't siege games a faff, everyone hammering away at the castle, a static mass of troops with nothing much happening? This can indeed be the experience of sieges, but I think here the Fifth Edition Warhammer Siege book is our friend, thinking of the siege not as one big grinding game, but as a campaign which is shaped by numerous smaller actions. 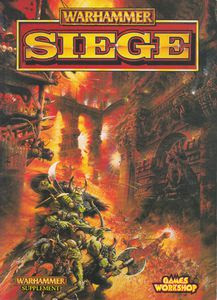 (To be clear, I'm not suggesting that we should play the siege as a 5th edition game, just that we should take a leaf, or rather several leaves from this excellent and somewhat overlooked book.) Tuomas Pirinen's edition of siege includes loads of different scenarios: Scouting; Messengers of the besieged force sending for help; Infiltration attempts; Blockades; Undermining operations. Each of these is a stand alone game contributing to the outcome of the siege.

So that got me thinking, what if, having set up the central siege, we then played numerous scenarios, ranging from tiny skirmishes, to dungeon crawls (to represent undermining operations) to smaller battles (to represent scouting actions), success in each of these shaping and reshaping the scene in the central siege, ready for the final battle? The way I see it working would be something like this:

Day 1: Everyone arrives in the morning, sets up the city walls, and places troops for the siege defenders and siege attackers. Everyone loves the central spectacle of all the troops set up, right? So set up the spectacle and then - here's the important part - just leave it there. For now, anyway.
Everyone would then turn their attention to fighting numerous smaller games on other tables; skirmishes and the like, representing attempts to sally forth, enact blockades (Man o'War blockade anyone), scout out the enemy, infiltrate the city (Mordheim game perhaps?).
The result of each of these games would then have a decisive impact on the central siege scene. So for example, if the forces of Nurgle (and allies) were to win a game, this could be translated into a decisive impact in the central siege setup such as: a breach in the city walls; the spreading of nurgles rot among the siege defenders; a siege tower reaching the ramparts, and so on. A decisive impact for the defending forces could be: pouring burning oil (or maybe disinfectant?) off the ramparts and wiping out units of the besiegers, spreading animosity among the besieging forces and causing them to fight amongst themselves rather than attacking the city, etc. In short, by the end of Day 1, the siege scene should look very different, having been transformed by the result of each of the smaller games of the campaign going on around.

Day 2: We now turn our attention to the central siege - at this stage it should be easier to reach a resolution as there will be holes in the walls, losses amongst the besieging forces, and so on. A brave force of the defenders sallys forth, for death or glory. By the end of the day we should know if Nurgle prevails, or if there is freedom.

What do you think? A two-day campaign when we can finally get back to the Foundry: "Breaking Nurgle's Siege" - is it doable?
Posted by robotforaday at 11:52

Email ThisBlogThis!Share to TwitterShare to FacebookShare to Pinterest
Labels: Back from the Lead, The Theory and Practice of Wargames Campaigns