After the Blood Bath 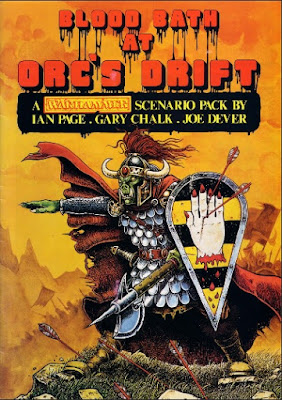 Well what a bloody fantastic day! Many thanks to Warlord Paul for GMing, to Thantsants for bringing all his terrain and minis (and letting me interlope with mine), to Nik for hosting, and to Steve Casey and Ashley for losing being such wonderful gentleman gamers.

In order to get through the whole campaign in a day, Paul made a few crucial tweaks to the classic boxed scenario.

1) The numbers were slimmed down, so generals had the following at their disposal (and remember, for the alliance side, the majority of these would only figure in the final scenario, together with survivors from the earlier action):

2) Rather than 2nd edition, we used the 6th edition skirmish/ Mordheim rules, with models moving independently rather than as units.

3) The first three scenarios - Kachas Pass, Ashak Rise, and Linden Way - were all played at the same time; with 6 of us playing we were able to pair off and do these simultaneously, before combining for the final big battle.


How did we fare? Well, Thantsants will be writing up a report in due course, but just to give some highlights from the perspective of the dwarves under my command (illustrated with pictures I've nicked from Thantsants - thanks!):

At Ashak Rise, a rearguard of dwarves bravely bought time to allow Snorinn Fimbul to load gold onto a pack mule and lead the gold (and mule) away to safety. 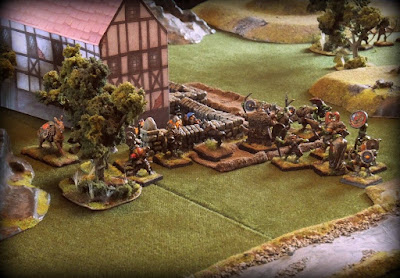 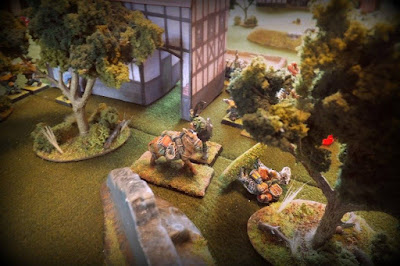 The orcs, characteristically getting hold of the wrong end of the stick, thought the gold was with the mules, and attacked them (suffering fatalities in the process), while Snorrin's dad Borinn ran off with another bag of gold. 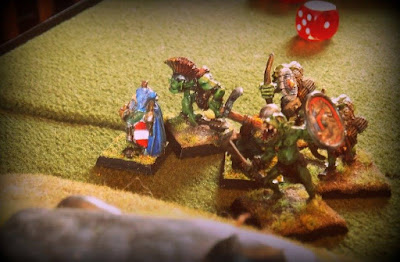 At Orc's Drift itself, my engineers undermined the bridge they had been building, so that when the orcs came thundering over, several died and more were washed away as the bridge collapsed underfoot. Alas, all gave their lives for this vallant (and sneaky) action, although not in vain, as the casualties were a major contributor to this side of the Orc attack losing its morale and fleeing. 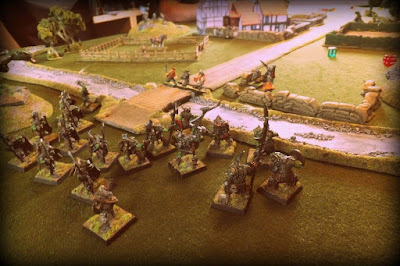 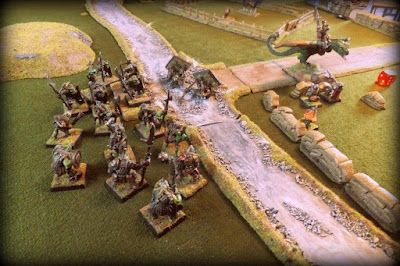 (The other major contributor was the Drunken Druid Snart casting "Plague of squirrels", which Paul swears is a real spell in Mordheim.)

In the farm compound, casualties were also high. 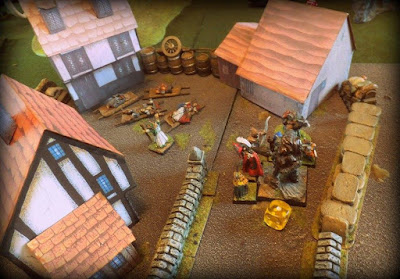 In the end, King F'yar himself was slaughtered along with his Wyvern mount - here's Borinn posing for a photo, smoking his pipe while perched on the body of his monstrous foe. 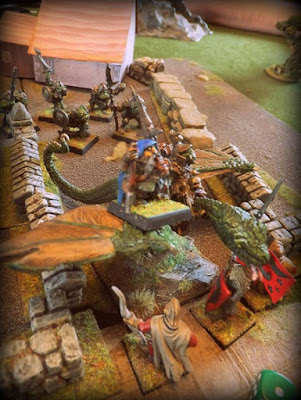 A victory for the grand alliance as the remaining attackers fled. Not many survivors were left to toast the victory, however. Though the paychest never left the surviving Dwarves sight...

I'm led to believe that alliance victories are rare, so I'm very pleased by the outcome - I think the changes made for a campaign that was very much in the balance throughout. For most of the final scenario we really thought we had no chance whatsoever - until the Orcs turned tail.


From Orc's Drift to Glazer's Creek
I've always had a weakness for last stand scenarios - perhaps my most treasured memory from teenage gaming is a campaign where my High Elves petulantly occupied a dwarfish brewery and held it against all the odds just to stop the dwarves getting a drink. And of course, Rorke's Drift - or more precisely, the depiction of Rorke's Drift in the film Zulu is the holy grail for wargamers looking for a heroic last stand. Bloodbath at Orc's Drift is a wonderful campaign that captures the backs-to-the-wall guts and glory. I loved the buildup scenarios and the little subplots, and the final battle really had a feel of desperation to the defence.

Fast forwarding to the late 90s, games workshop had another shot at adapting "Rorke's Drift" in the scenario and battle report "Last Stand at Glazer's Creek" (WD222) - one of the major highlights of what I consider a golden age of White Dwarf. Here's the scenario itself, written by Jervis Johnson. 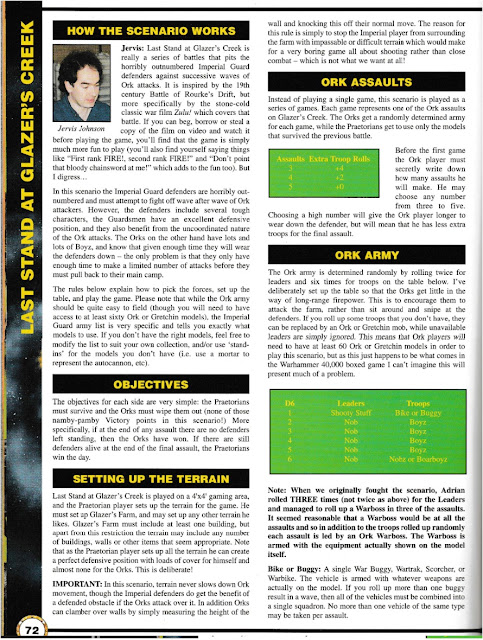 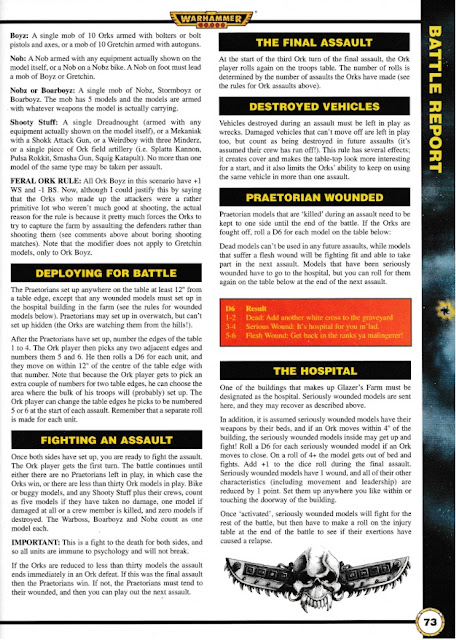 I never played 40k, but I always thought this was a brilliantly designed scenario, and thought long and hard about adapting it for fantasy battle (though never got round to it in my youth - perhaps I will now?). It really works out as a series of battles, simulating wave after wave of attacks from a randomly determined feral Ork force who back off when they drop below a certain number, only to attack again later. The Ork general secretly chooses between 3 and 5 assaults - fewer attacks means that he can roll up a bigger attacking force each time. More attacks, the smaller the force, but the more opportunities they have to grind the defenders down. Each time, the attackers roll up a fresh force, while the defenders only get the survivors from the previous game, so the number is whittled down more and more. There are special rules for casualties winding up in the hospital, and crawling out of their beds as a last ditch defence, adding to the fun. Victory conditions are simple: by the end of the last assault, the defenders are either dead, or some still living. If some are still living, they've won.

What I love about the way this scenario is designed is the way it simulates the attrition of the siege, as the defending forces become more and more stretched. It's a different approach to the final scenario of Orc's Drift, but I think its a fantastic 'take' on Zulu in its own right, and if I can work out a way to port it over to Warhammer fantasy battle (still no interest in 40k!), I'd love to try it out, perhaps for 6th edition to keep it at a reasonable pace? (3rd edition might grind too much to play over multiple assaults).


Lessons from history
I'm unlikely to get into historical gaming of the Colonial Wars (although given my interest in Space 1889, stranger things have happened), but those who are may be interested to note Warlord Games are now selling a Rorke's Drift Battle set featuring suitable terrain and both forces:

And all gamers interested in wargames inspired by Rorke's Drift should have a read of the Osprey Campaign book on Rorke's Drift, 'Pinned like rats in a hole', by Ian Knight. 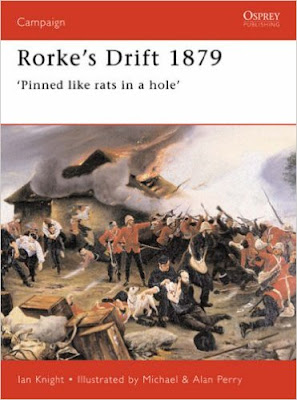 With illustrations by the Perry's there's obvious oldhammer interest there, but of most use are the pages of notes for wargamers at the back which highlight important considerations for anybody trying to simulate the campaign - such as ammunition constraints in dealing with a numerically superior opposition, and also the "apparent contempt with which the British regarded their opponents", leading to terrible decision making in the early engagements of the Zulu War (given the roleplaying approach oldhammer gamers take, such arrogance is well worth incoporating into the game design). More generally, Knight points out that it's well worth thinking about these encounters from the Zulu point of view rather than getting all hung up on the plucky last-ditch defenders and their stiff upper lips. I agree.
Posted by robotforaday at 09:52