The Oldhammer Weekend: Rumble in the Jungle Battle Report

We came from across the sea. Not to plunder, only to excavate. Drawn in not by greed, but by curiosity. Drawn into the valley. Towards the temples. Towards death.

This is an account of the wonderful game GMed by Padre at the recent Bring Out Your Lead! Oldhammer weekend at the Foundry, Nottingham, the background for which I outlined in the previous post of this blog. Two fantastic reports of the battle have already been provided: Padre's own battle report and an account by Citadel Collector, who organised the events and random encounters in the scenario. (I've nicked their photos for this battle report. So if you're getting a sense of deja-vu, it might be because you've seen many of these pics already). Their accounts are truly wonderful, but make the terrible mistake of focussing on the action at the north end of the table, where substantial forces of Orcs, Chaos, and Amazons were actually managing to get into the temples and steal treasure. For my Elves, valiantly battling for survival at the south end of the table, it was as though this skirmish was not even taking place (though they couldn't help hearing the terrifying sound of a Norse giant screaming like a girl as it hotlegged it out of the valley). So here is the story of the true battle; the one that really matters... (Or, to put it another way, if you want the full story go and read what Padre or Citadel Collector have to say... if you want to hear me wittering on about my own toy soldiers to the exclusion of everything meaningful that actually took place, then read on, oh discerning reader!) 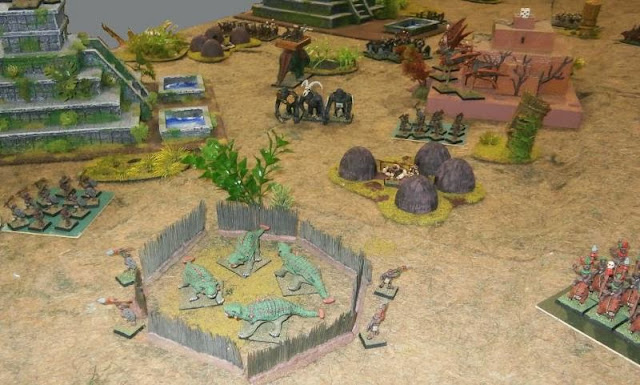 Defenders of the temples; photo by Padre 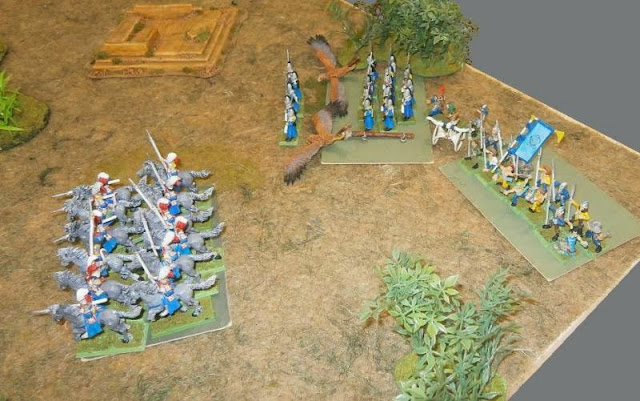 Entering the valley from the south, the Elven forces advanced towards the nearest temple, which according to the sorceress Serellia was "bathed in the sweet odour of antiquity".

How she had managed to discern this through the stench of the corpses that lay between the force and the temple was anyone's guess. Corpses of a previous company of fools who had tried to raid the temples. Corpses clothed in a blanket of maggots and flies. Corpses that were slowly moving forwards. Moving forwards in attack. Gathering his resolve and the resolve of his cavalry, Lenihan gave the order to charge the shambling dead. 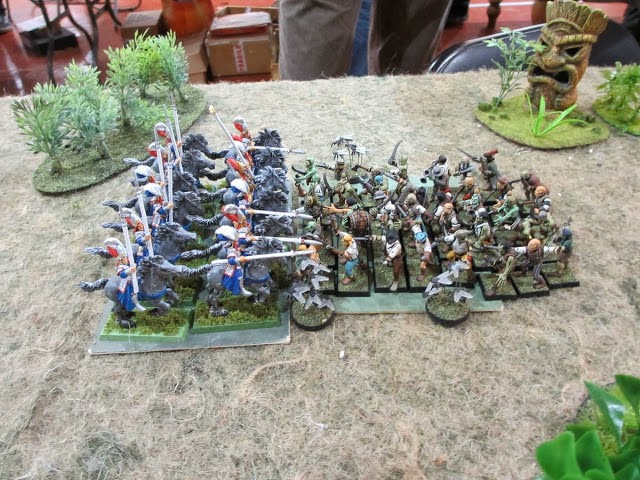 In the east, eagles swept past a unit of boar-riding natives: a warning blow, a statement of intent. First blood. Would the pygmies be disuaded from putting up a fight, and return to their ramshackle huts? It seemed unlikely. 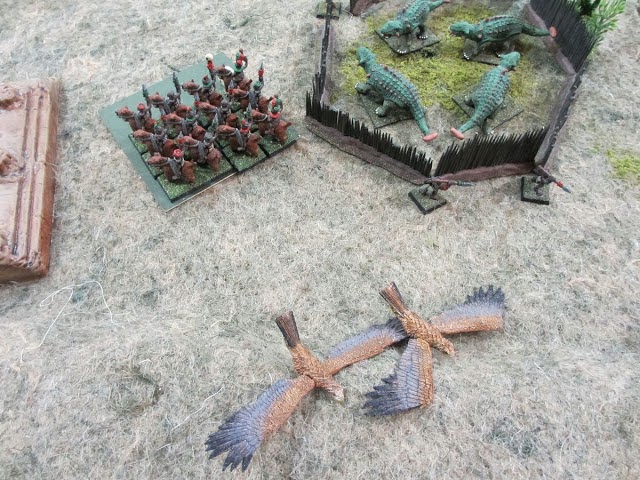 Suddenly, a temple guard materialised, summoned from the depths of time by forces unknown, brought into this age to stop those who sought to defile the temples - flickering for only the briefest of seconds before being cast away into eternity by a volley of elven arrows and a sea elf ballista bolt. Blinking in the harsh light of the southlands sun, the expeditionary force began to ponder whether they were trespassing on land forbidden by the ancients. Caution was clearly required. 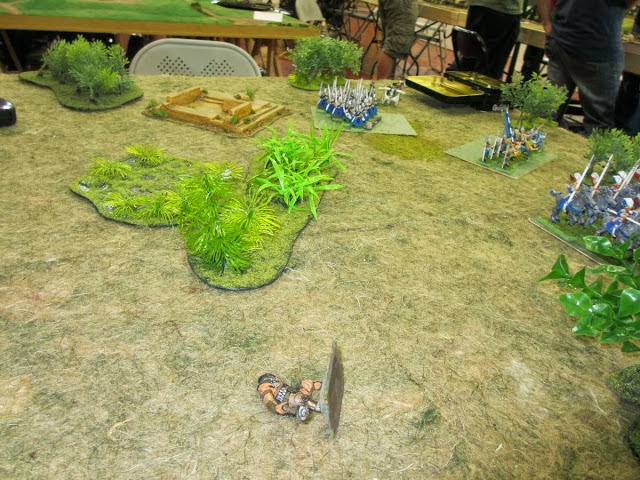 Temple guard, we hardly knew you; photo by Citadel Collector

Combat between Lenihan's shore riders and the stinking dead continued; more animated bodies rising from the ground to swell the number of attackers, only to collapse in instability. The battle was slow, grim, and smelly. Lenihan and his shore riders eventually dealt with the threat with minimal casualities; yet the conflict had left the cavalry in disorder, badly needing to regroup. They were now rather vulnerable to the valley's defensive force; not only had the diminutive Dagyoto natives released three great hammer-tailed lizards from their pen - the shore riders could also see three giant gorrilas stomping in their direction, while boar mounted natives prepared to charge.

Sometimes the most courageous thing a general can do is give the order to withdraw, retreat, and regroup. Who but a coward allows his soldiers to die simply for his own pride, when the greater tactical advantage can be gained by turning and running? And so, when receiving a charge from the great gorrilas, weighing up the risk that his cavalry could very easily find itself subsequently charged on both flanks, Lenihan made the tactically sound decision that the riders should flee. Flee in a controlled, discipined, and efficient manner. It was in this way that they would demonstrate the martial excellence of Ulthuan. Thus they bravely ran away.

By the time that Lenihan decided that it was once again strategically sound to turn and face the enemy, the expeditionary force found themselves in a tight and well organised battle line, with each unit's flanks covered. There was only one problem - they had hardly made any progress towards the temples. They were, more or less, back at the point where they had started.

Giving the order to pick off what remained of the temple defences, Lenihan and the shore riders now charged the hammer-tailed lizards, while sea elf bows and bolt throwers sent a skirmishing unit of natives into flight, before turning their attention to the giant gorrilas. Two fell to the arrows and bolts; the remaining gorrila ran and hid. 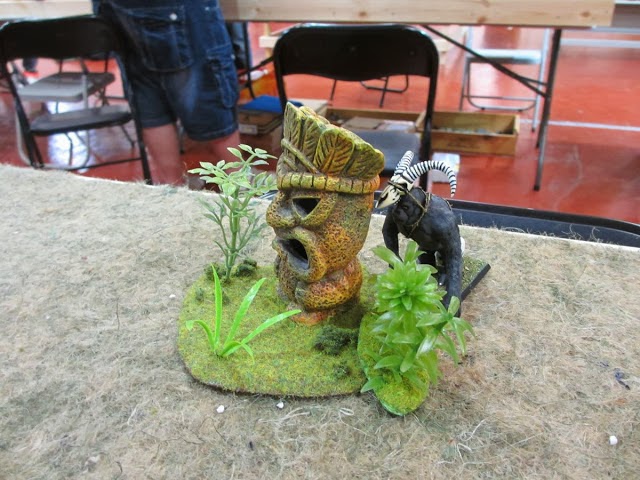 Bet they won't see me here... Photo by Citadel Collector

Up to this point, the elves had suffered only minor casualties, while efficiently picking off those who stood in their way. There was little to disuade their curiosity. Their luck, however, was about to turn dramatically.

Lenihan and his shore riders were caught in conflict with the hammer-tailed lizards (while all the while the natives in charge of the lizard pen hid and took bets on the outcome). The conflict ground slowly, with the elven blades doing little to pierce the scaly skin of the reptiles. 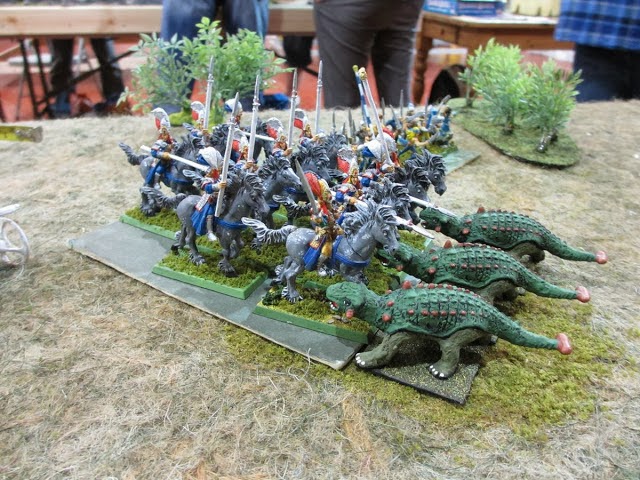 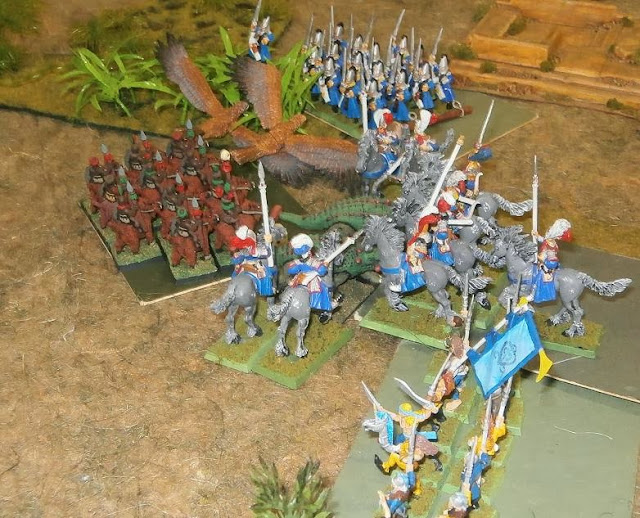 Suddenly, the pygmy hotpot catapult - which had previously restricted its activities to splattering stew across the battlefield in a seemingly random manner - found its target at the heart of the unit of sea elves. No sooner had the elven crew shaken off the shock of being hit by a pot of the most unrefined food it had been their misfortune to encounter (only the finest silver service is provided on board elven ships), they were hit in the face by a second pot. Only a single rank of the sea elves survived the unwelcome meal. 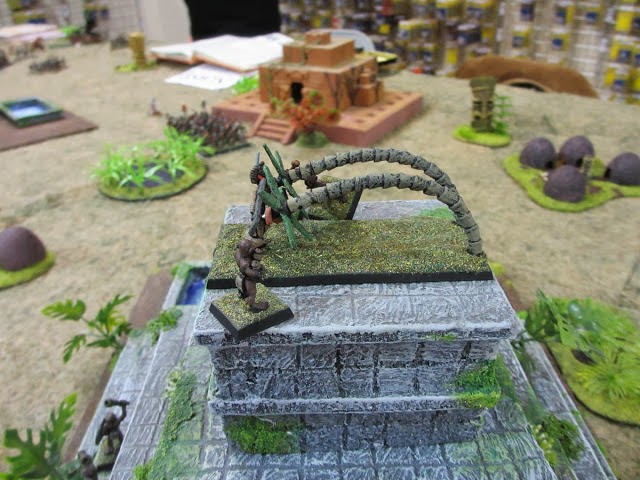 Pygmy hotpot catapult; an ingenious use of the trees at the top of the temple. Photo by Citadel Collector. 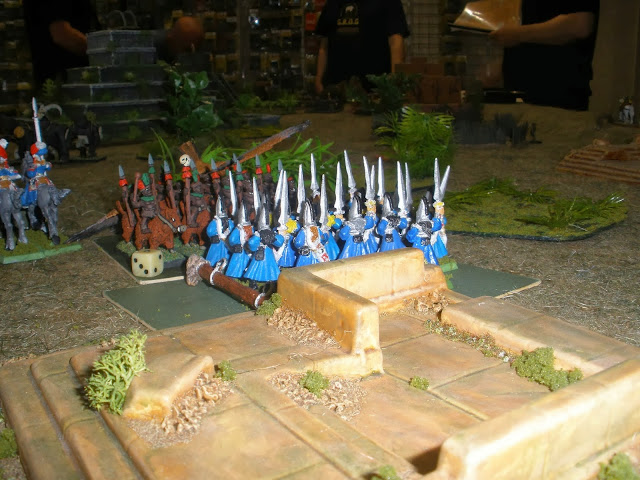 And to think we never got to use that battering ram; photo by Warlord Paul

This was only meant to be an archaeological dig. Things were going badly wrong for the would-be antiquaries.

Day was closing. But rising high above the valley, the eagles saw that which the entire elf force had failed to notice - all the while Lenihan's forces had been engaging with the temple's defenders in the south, at the north end of the valley, brutish forces had managed to break into the temples and were heading off with precious artifacts.

The eagles swooped, talons ready to snatch the ill-gotten plunder from the hands of the uncivilised brutes - only to find themselves smashed into the side of the mountain by a blast of wind from a greenskinned shaman. 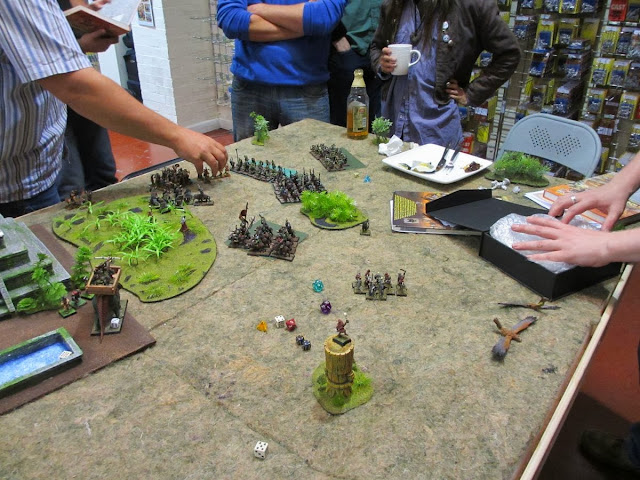 The north end of the table (not featured in most of this highly selective battle report!), where the other forces had actually managed to get their grubby hands on treasure. Note the eagles after their failed attempt to grab the treasure. Photo by Citadel Collector

So near and yet so far. 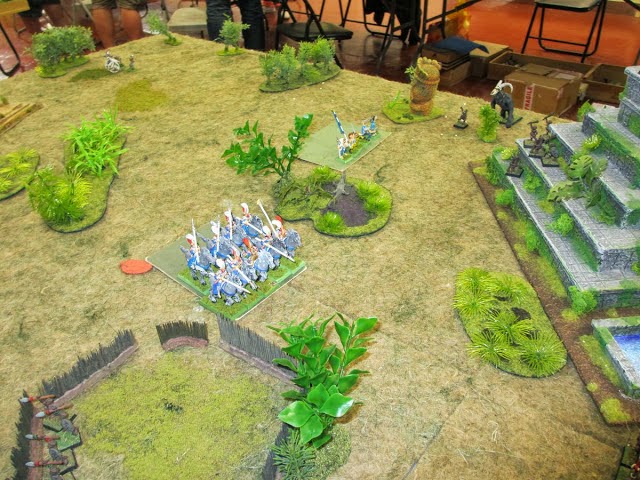 All in all, a fun game. Many many thanks to Padre and everyone else involved! A perfect reintroduction to gaming in general, and a wonderful introduction to 3rd ed and the joys of GMed gaming. I chose a very conservative strategy, perhaps overly cautious - in a sense I felt this was in character (would an elven general sacrifice his kindred's lives for the cause of, in effect, an archaeological expedition? Doubtful.), although maybe as a 3rd ed novice I took the caution a wee bit too far. I think that the scenario was a great one, really captured my imagination. If I was to make two comments on the design, they would be: 1) it didn't require a table quite as long as was used; and the length of the table made it a little unlikely forces in the north and the south would encounter one another; and 2) possibly the events and random encounters came a bit infrequently and needed to be forced in the later turns of the game - I get the feeling that there were a lot of exciting encounters that never got to be used! However, these are minor points, as in general I massively enjoyed myself. Great gaming, great company, and the highlight of a fine weekend's gaming, drinking, and reimmersing myself in the world of Warhammer!

You might expect me to be turning over the tactics I used in my head, pondering where it went wrong, how I could have got to the temple, made it out with the treasure and won the game. However, my mind has been taxed with a far more pressing puzzle: does Nottingham REALLY need an all-night Greggs? And does that all-night Greggs REALLY need not one, but two bouncers?
Posted by robotforaday at 16:06 2 comments: