The Poison Dwarf and the children of stench

The Poison Dwarf, champion of Nurgle, and the children of stench gather at a local hostelry, pre-loading in advance of a weekend of carnage on the Wirheal.
"Eh, is it just me, or is there something a bit... funny about this beer."
"Yes?" The Poison Dwarf smiled maniacally beneath his oversized helmet.
"It tastes a bit... er..."
"Yessss?"
"I can't quite put my finger on it... it's a bit..."
"DISEASED? Bwahahahahaha!" The Poison Dwarf roared with laughter.
"Er, well I was just going to say it tasted a bit yeasty. But now you mention it, it does have a strange green colour to it. And it stinks like a sewer. But at least it's completely taken my mind off that whacking great axe lodged in my head." 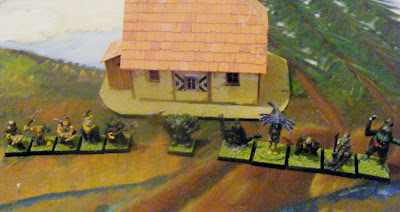 The first painting I've got done since January, these were actually started back when I had my gaming slump, back in March. Springinsfeld suggested figures I don't care about too much... Whiskey Priest suggesting picking a figure for its own sake... and the one suggested getting wasted. Well, I combined those strategies. First, I cut up an old chaos warrior (you know the one, that plastic one that came in the painting set) and made it a dwarf and slapped paint on it. Then, dubbing him "The Poison Dwarf" I rolled up a chaos warband that he could lead... rolled 5 chaos dwarves and 5 beastmen, which led me to choose a model I've wanted to paint for its own sake for a long time (the dwarf with the tentacle arm and his face in his torso) and a load of crude swamp-beastmen types I could paint drunk. One of whom is a Grenadier zombie with a headswap.. the head in question being a Necromunda Ripperjack. Don't drink and convert, folks! Anyway, I enjoyed getting started with each of these but then enthuasiasm waned.

Until Gauntlet, the annual Deeside Warriors show, rapidly approached, and we decided to have some chaos warbands games, rampaging over Albion and despoiling what we could, following on from 2014's game The Forgotten Goddess. So I finally painted up my nurgle warband... some close up shots here. 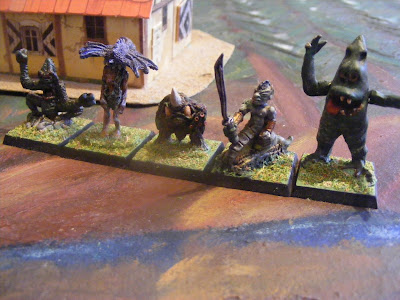 Apart from the C38 slugman, and the aforementioned Ripperjack where the head of a Grenadier zombie used to be, who can identify the other 3? I've not got a clue! 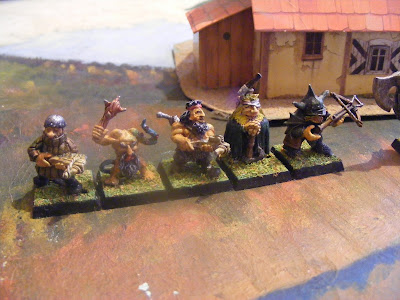 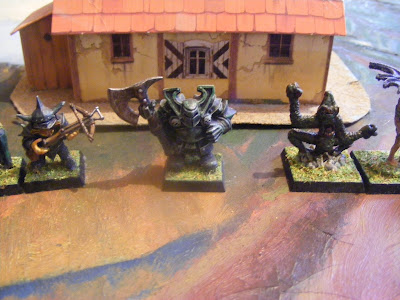 See, this is my problem, I can only paint when I have a deadline. And to add massively to the stress, this happened while we were moving house. And with me having agreed to be GM, I had to paint up some NPCs and terrain for the scenarios we were going to play at Gauntlet. Luckily, my wife and son were on hand to help, and together they made a trio of amazing barrows for the warbands to do battle over... and to house the (Night Horror Range) Barrow Wights.

Some battle reports from the games will follow soon. Thanks to Thantsants and VanLoon for a great day's gaming, I'm only sorry that Warlord Paul couldn't make it.
Posted by robotforaday at 07:37 5 comments: