Great news from Andy Atom Taylor: the halfling slingers he's sculpted for me in the style of Roman auxiliaries (as discussed in my last post) have now been cast up and will shortly be on their way to me. 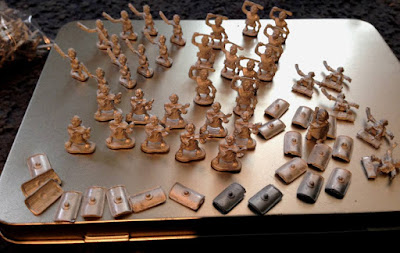 As you can see, Andy's been kind enough to throw in a couple of other lovely halfling models: some copies of a young halfling lad with a sling, that'll obviously go nicely with the roman-style slingers he's sculpted and a "grumpy housekeeper halfling" sculpt.

Very excited. Snickit suggests I should dub them "Half-flings" or "Half-slings". I daresay these (and the Roman-style dwarves) will be my painting project for July. It'd be rude to let such good work fester in the leadpile.
Posted by robotforaday at 05:22 6 comments:


About time I got back into the habit of blogging. As the days lengthen, idle daydreams turn to battles yet to come. Summer's in the air... time to raise an army.

But what kind of army? Well, as those who read my last post know, I've been in a bit of a slump gaming wise, partly due to the fact that life has been so stressful workwise and I just couldn't find any joy in the hobby. But a return to Gauntlet is in the offing for July, and then depending on travel plans, maybe I'll make BOYL this year? Plus Whiskey Priest's plotting Dutch Revolt; Matthew Dunn needs gnome reinforcements at Hampton Court... ah yes, the world of gaming beckons. So with all those promising avenues open, I do what any wargamer does: I plan a completely unrelated project.

I'm currently very excited about something Andy Atom Taylor has been working on for me. These little guys; haflings in the style of Roman Auxiliary slingers. 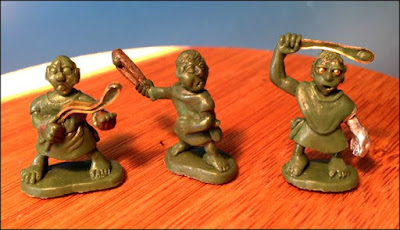 I had asked him to try and sculpt some little fellas for me along the lines of these kind of lads (but more, well, halflingy): 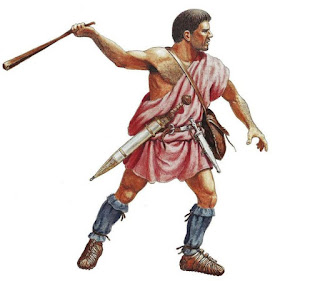 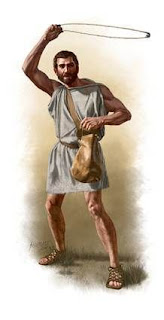 (historical pedants will note that the guy depicted on the right is in fact a Greek, but you get the classical idea I'm going for anyway)

As you can see, Andy's definitely delivered. To my eye, his sculpts look like something from a Roman era mosaic. Here are his halflings with shields: 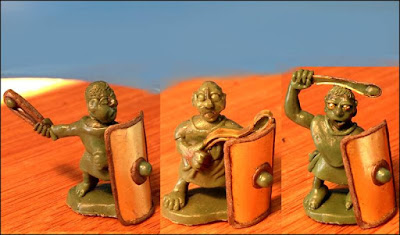 Hopefully this lot are going to be cast up in the next few weeks. I can hardly wait. (Andy, if you're reading this, a hundred thousand thank yous!)

So why did I ask Andy to sculpt these for me? Well, at Gauntlet back in 2014, I managed to pick up a load of blisters of Roman-style Dwarf Legionaries from The Baggagetrain for a bargain price. 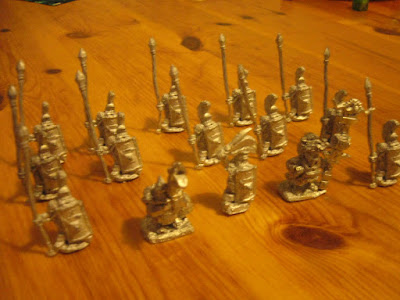 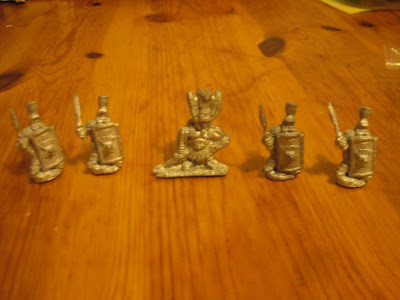 These are the old "Rhom Dwarves" range from Acropolis Design, sculpted by Paul Henni. The range is now inherited by The Baggagetrain.

Well, that whet my appetite and during one of Black Tree Design's frequent sales, I ordered a load of the old Harlequin Dwarf Imperial Legionaries for half price. (Who sculpted these? I'd love to know) 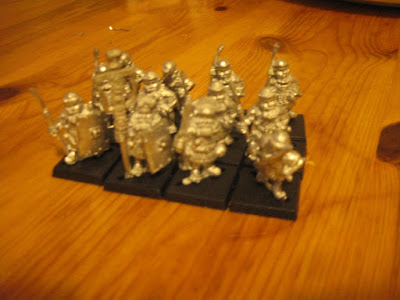 So here I am with a massive load of Roman Dwarves. Why not go all out and make a Tilean shortarse army, thinks I? But wait! Wouldn't that need some auxiliary missile support? And why stop at dwarves? Why not halflings too? And so I got in touch with Andy...

Time to make a start on these while I wait for the halfling casting process to begin. Although perhaps before I start painting, I suppose I should go shopping for a Ballista to give some artillery support. And I should really try and get Hasslefree's "Minimus" Roman halfling (annoyingly out of stock)... and there's conversions using Jugula bits to plan... and... and...
Posted by robotforaday at 14:58 6 comments: