The goblin who wanted to fly

There was the time he'd tried to make a steamtank out of two barrels and a bathtub looted from some fancy-pants Duke's castle. There was his idea that nests of bees might make good siege projectiles, which ended up with half his camp getting stung.

But Gimrod's greatest dream was to fly. To soar like a majestic bird of prey. And today, thanks to his latest idea, he was going to achieve that dream! If only the goose he'd stolen and stuffed into a bag on his back would stop biting him. 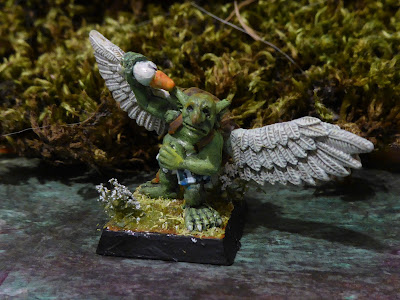 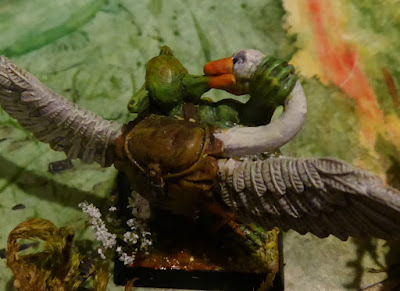 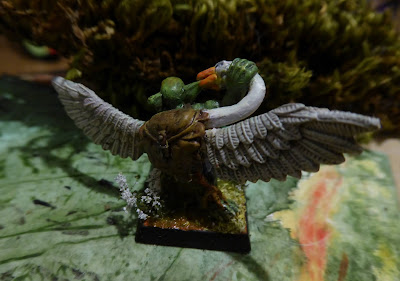 A wonderful sculpt by Michał Ziętkowski. The moment I saw this 'flying goblin' on the Oldhammer Sculpting Group I fell in love with the concept and had to get hold of one. A genius idea, and the goblin's look of steely determination is just great. Really enjoyed painting it, and thanks to Michał for sending me a cast. I'm looking forward to seeing Gimrod take flight over the battlefield in the near future!
Posted by robotforaday at 14:56 3 comments:

Email ThisBlogThis!Share to TwitterShare to FacebookShare to Pinterest
Labels: Orcs and Goblins 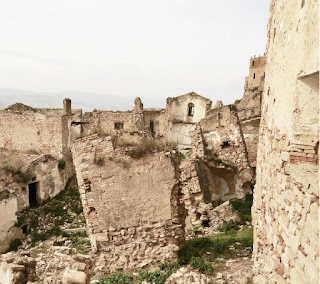 "Father! Father! I bring wonderful news! We have been liberated!"

The old blind man laughed. "Liberated, you say? Oh my dear girl, I would not be so sure."

"But father, surely anything is better than being overrun and enslaved by Orcs?"

"Before the Orcs, my girl, it was the army of the Duke. His brigands ransacked our chapel while he claimed Droit du Seigneur. And before them it was the sneering Elves. Were we anything more than slaves to them while they obsessed night and day uncovering ancient ruins? And before them, how many were driven mad by the cults of strange gods? Oh, my dear, I have seen too many liberators in my time. What is the difference between one occupying army and another?"

The door swung open. A fat soldier with a scar across the right side of his face stood in the doorway barking. "This house is now commandeered for the army of the Emperor. Woman! My men are hungry. Bring us food and bring us ale."

The old blind man sat and said nothing. He knew one thing: this would not be the last army to liberate their town.

While we're all locked away at home, one of the things that keeps us going is dreaming about the games we might play in the future. Which is why I've been getting so excited about Benjamin May's planned campaign weekend using the Warhammer 5th Edition campaign rules. 5th edition was the edition I played in my youth and some of my best gaming memories are of the Southport GW summer campaign back in 1998, so this will be a nice nostalgia trip for me as and when it happens. I wrote a couple of microstories for the campaign pack, so I thought I'd stick them up here.

We'll be campaigning in the Badlands, amidst the ruins of the Kingdom of Strygos, and in search of the legendary Doomstones! 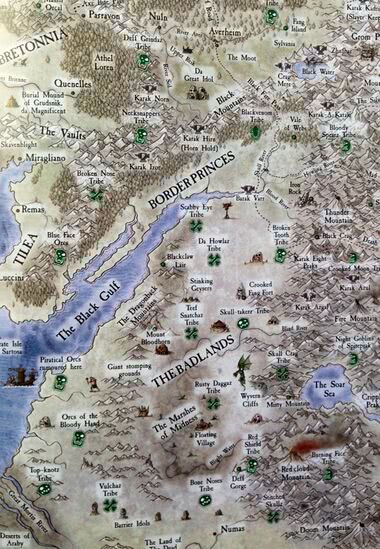 He surveyed the barren lands that stretched out before him. Clotted rivers through fetid swamp. In the distance, twisted mountains. Who would lay claim to such a hellhole? But he knew these lands had secrets. Ancient monuments, forgotten temples.

Were the historians to be believed? If the stories were a lie, this expedition had been in vain. They had doomed themselves for nothing. But... what if the stories were true? What then? Even thinking about it made his heart race. The four stones, the four great crystals of legend. Whoever had them had the power to bend the fates to their will.

Of course, he had been sent to bring the doomstones back to his patron. But once he had them in his possession, who could stand in his way? Then he would have no need to bow and grovel before any patron. All time and space would grovel before him! For a moment he sat there, staring into the distance, lost in a kind of reverie. Then, coming to his senses, he gave the signal to his troops to advance.

In my teenage years, my only army was the High Elves, and so in returning to 5th edition, I wasn't going to miss this chance to restore my High Elves to their former glory! The only problem is that my collection is split between my childhood home in Liverpool and my current home in Orkney, and most of my old High Elf army is down in Liverpool. And of course I want to start getting ready now... So for that reason I'm going to use the minis I have here as the heart of the army, giving me a reason to finally get some paint on them: a unit of White Lions, a handful of archers (the old Melnibonean models), and a Great Owl (counts as Great Eagle).

I'll also be able to call on support from my Sea Elves if needed, but what's a new challenge without new minis to paint! And those White Lions have been waiting for paint since 1998, which is tragic in itself...

Hopefully I'll have some painted models to show you soon enough, and I can start telling the story of this army.
Posted by robotforaday at 08:20 2 comments: