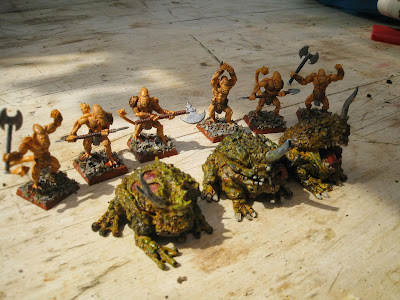 "And on the lands near Ida's towers,
A loathsome toad she crawls;
And venom spits on every thing
Which cometh to the walls"
- from the ballad 'The Laidly Worm of Spindleston Heugh'

Well, the unconstrained joy and the sickly hangovers that characterise Bring Out Your Lead 2014 are only now beginning to fade from memory, and soon I hope to type up a couple of battle reports from this most wonderful of weekends. Others have done a sterling job recording what it was like: see Orlygg here and here and see Warlord Paul here. I'm not going to attempt a grand scale review of proceedings, just give a very partial account of the kerfuffles I was involved in, but before that I thought I'd introduce of the newest weaponry at the disposal of Clan Slea: my Swamp Toad Plague Artillery.

In my search for creatures that (literally) ooze all things marshy and swampy, toads and frogs were very high up on the list. In particular, I was keen to exploit the medieval idea that toads spit venom, acid, bile, and all manner of unpleasant things, as clearly expressed in the ballad above, in which a woman is turned into a spitting toad. This theme is picked up in the Fighting Fantasy series in the (rather obviously named) SPIT TOAD, a man sized toad that spits acid into its victims eyes before devouring them - you can find these charming fellas in Island of the Lizard King. 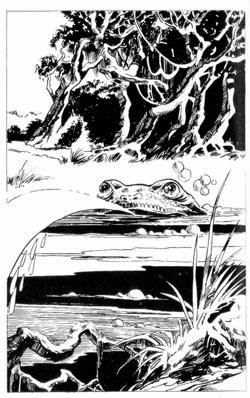 So when I saw the Nurgle Plague Toads that Forge World were producing, I felt they were the ideal addition to my fimir army; and with the size and design of them, they immediately suggested a kind of artillery piece - a sort of plague mortar spewing forth disease and bile onto the enemy. The only problem was the cost - they're not the cheapest things in the world. But then I was lucky enough to pick up a set on ebay in the United States. They weren't offering postage to the UK, but I got them sent to an address in the US and then asked my long suffering wife to bring them back to the UK in her luggage.

For handlers, I've used Bog Raiders from Blood Moon Miniatures. Compared to other fimir-substitutes, these lads are definitely what you might call ripped. They have muscles peeking out from their muscles. It's a bit unsettling, like some kind of dodgy infomerical advertising ab crunchers. For this reason, they don't necessarily fit in with other not-fimir, and I do really REALLY hate the way that they come in so many little bits; having to assemble a single infantry model from 4-5 metal pieces (that aren't even that interchangable) is definitely not my idea of fun. So for that reason, they're never going to get a ringing endorsement from me, although I have to admit they do paint up quite nicely.

The plan for the siege game at BOYL was to have these buggers spreading death and disease among those cowering behind the castle walls. Did we succeed? All will be revealed in the next exciting installment...
Posted by robotforaday at 17:21 6 comments: