Looking back on Orctober: a goblin playground scene

My review of the year past has almost caught up with the present. I just have one more completed project I thought it would be nice to share here: my contribution to Orctober. Funnily enough I've never managed to paint anything up for Orctober before... and this year was no exception, as it didn't get finished until November.

A couple of rather old Citadel fiend factory miniatures that I inherited, paired with a more recent purchase from the Foundry: 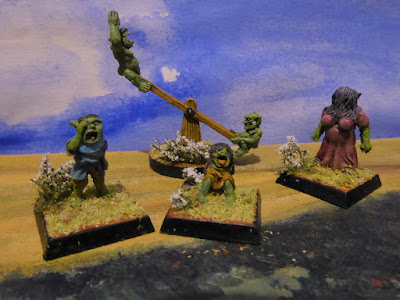 FF65 Goblin Children crying to their FF64 Goblin Mother about having been thrown off the seesaw by Warmonger Orclings! Blue sky and clouds in the background courtesy of a painting by my son James.

I've been chatting with Warlord Paul and we're thinking of having a game (probably next Night of the Living Lead) where goblins are the good guys for a change- or at least the ones we're trying to defend. He writes: "The goblins of Little Albion are having a hard time right now. Their princess has been abducted by Lord Kraust and they are being used and abused by him as he expands his power..." A good opportunity to bring out all the weird and wonderful goblin civilian and character models... but that's for next year!

In the meantime, have a wonderful Christmas Day, and I hope Father Christmas brings you lots of presents!
Posted by robotforaday at 08:10 4 comments:

Email ThisBlogThis!Share to TwitterShare to FacebookShare to Pinterest
Labels: Adventures in Albion, Orcs and Goblins, Orctober

The Brotherhood of Public Sanitation

After the years of plague, as death washed over the land, a new threat even more virulent arose among the survivors. The Cult of the New Colossus had arisen to prey on the hopes of the people. It must be stopped.

Only the most devoted to the cause of wiping out this strange new movement could be trusted to deal with the horror. What was needed was a brotherhood: a brotherhood against all cults. Those initiated must be ever-zealous in their devotion to hunting down and wiping out new religious sects as they arose. Unflinching in the face of religious fanaticism. There was to be no corner of the land where dogmatism could take root. The purifying fire of the brotherhood would render all cultish dogmas anathema.

This was the promise of the brotherhood. After the plague, an assembly of the children of reason, determined to fight the new plague. Their faces covered, as they had been since the plague began, to show their unwavering commitment to the cause. 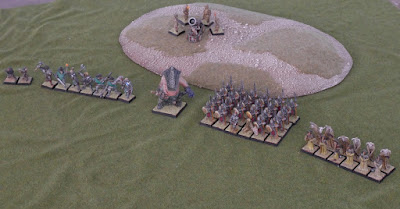 Next in my series of posts catching up on the passing year, we move to Bring Out Your Lead 2021 - a quieter affair than usual, as it was delayed to the autumn, but that's not necessarily a bad thing as it made it a more relaxed occasion altogether.

Many of you will be aware of Steve Beales'/Thansants mastery of the Old World Army Challenge, painting an enormous, mindbending, literary Chaos army - the Cult of the New Colossus. I did what any right-thinking person would do, faced with clear evidence of someone's far greater talent and work ethic: I sought to destroy it. Luckily, I was not alone - Steve had managed to inspire envy and disgust all across the Oldhammer world, and so the stage was set for an epic struggle at Bring Out Your Lead, as we all gathered our forces to stop the Cult of the New Colossus before they performed whatever horrific ritual Steve's fevered and well-read imagination could think up. Expressing the true warmth and mutual respect that is the hallmark of our Oldhammer community, the battle royale was quickly christened "Kill Beales".

I wanted to gather a new force with the specific goal of destroying this disgusting cult. An anti-cult cult assembly if you will. The key themes I decided on were:
1) that the army would be entirely masked or otherwise have covered faces - a tradition of hygiene that began during the plague and has persisted as the mark of true faith among those fighting the moral plague that is Steve Beales Chaos.
2) that the army would display an unhealthy fascination with the purifying force of death as the only thing that can subdue chaos.
3) that the army would epitomise the principle expressed by Nietzsche but which - let's be honest - we all know from the opening of Baldur's Gate: "He who fights with monsters should look to it that he himself does not become a monster... When you gaze long into the abyss, the abyss also gazes into you..."

The first unit to be painted were the Brothers Spiritual - Fenris Miniatures Plague Cultists with CP Miniatures Night Terrors. With this unit, I really wanted to lean into the plague mask theme, but also give a sense of the brotherhood evolving into horrors themselves... 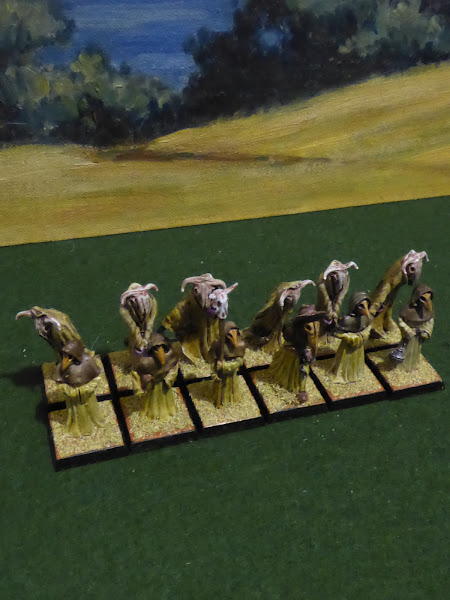 The next unit were the Brothers Militant - pretty straightforward Witch Hunters really, mostly from White Knight's Miniature Imperium, with a couple from Perfect Six Miniatures. 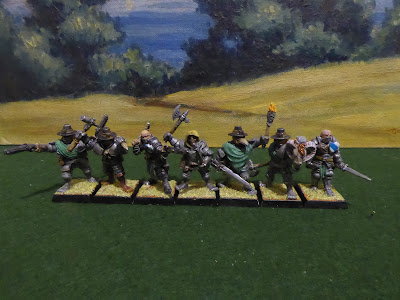 At this stage we needed some muscle to try and tackle some of the larger horrors of the Cult of the New Colossus - and so I painted up Brother Pyramidhead, an Ogre from Dark Art Studios. 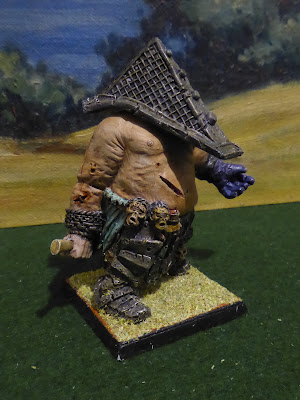 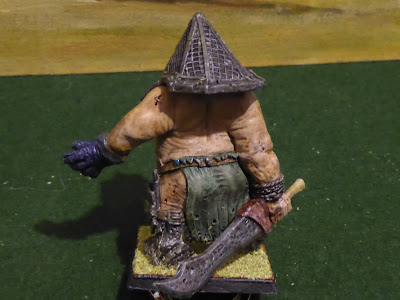 Also with some of the larger and more damage-resistant targets in mind, I decided that adding a mortar would be a good idea: enter the Brothers Fulminant - evil hooded minions from Pulp Miniatures tending to an OOP undead cannon from Fenryll miniatures. 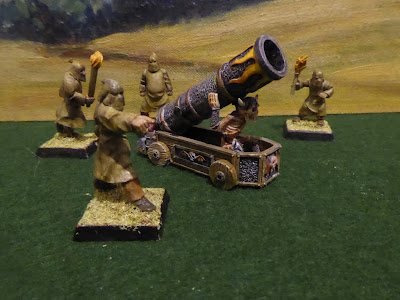 And finally, some old lead: rank upon rank of the Brothers of the Flensing Shame (i.e. Citadel's Regiment of Renown Knights of the Cleansing Flame) - though to fit them with my brotherhood, and to compensate for a lack of the complete command set, I added a C03 series Cleric Bishop to lead the unit, and an Oakbound Mari Lwyd style figure to serve as a suitably creepy substitute for a standard. 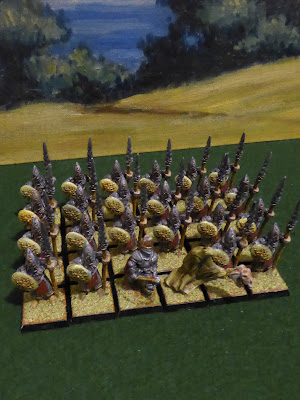 How did they fare at BOYL? Not surprisingly, even as one small part of the forces amassed against the Cult of the New Collosus, we made little inroads to stopping their foul and perverse rituals. We were just too slow in disrupting their ceremony... 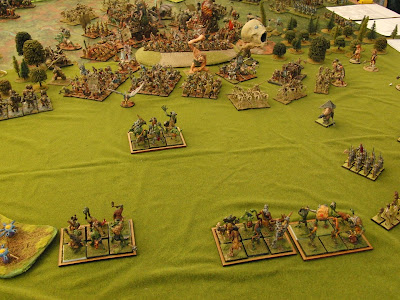 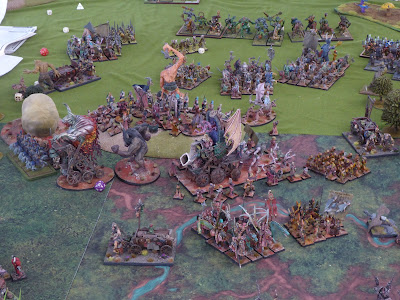 The brotherhood did slightly better on a trollhunting mission the next day (winning by errrr... abducting the troll's children while directing the rest of the trolls into battle against the other forces... but that slightly shady moral tale is for another day!) 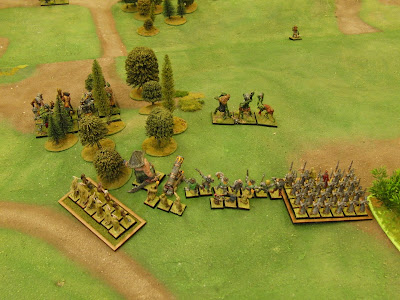