This is the start of an occasional series of musings about the Fighting Fantasy books. I'm going to be playing through them in turn - at least, through those of the series set in Titan, seeing as fantasy settings are my primary interest. I'm not going to type up playthroughs (because that would be boring and involve spoilers), and I don't want to write these as book reviews exactly. What I want to do is take inspiration from each of the books, and to jot down the ideas that they give me for future gaming.

Starting, of course, with the one that started it all, Steve Jackson and Ian Livingtone's The Warlock of Firetop Mountain from 1982. 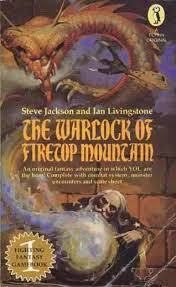 The real beauty of the book, for me, lies in the illustration. The cover by Peter Andrew Jones is nice, but above all I'm talking about Russ Nicholson's drawings inside the book. The work that Russ Nicholson does here is truly amazing. I firmly believe anybody interested in old school gaming should take some time to study the atmospheric depth of his pictures. To pick up on the theme of technique vs imagination, here's somebody who's a master of his craft - the draughtmanship is exquisite - but whose primary goal is to give us pictures that our imaginations can drink from. With a lot of fantasy art, the effect can be limiting: "oh, that's not quite how I imagined it" or "oh, so that's what it looks like. I guess I don't have to imagine it anymore". What's wonderful about Russ Nicholson's work is that it doesn't do that, it leaves enough mystery in there that you still need to figure it out, and there's always that question: "what lies beyond the next corner". He's not doing the work of imagination for you, he's feeding your imagination, and that's his great achievement. 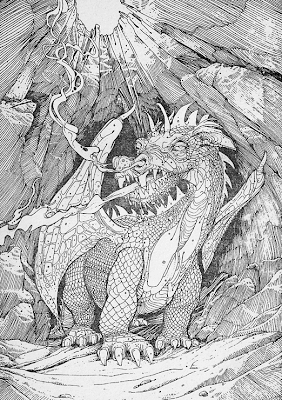 Ok, onto the text. Love the topographical description in the first entry. Topography is a big part of setting the scene, but all too easily overlooked.

This is a classic dungeon crawl, hacking and slashing your way through, moving steadily onwards and thinking with your sword. Nothing wrong with that, although I guess a bit more depth would be nice, but this was only the first book in the series. Some people have complained that the construction of this kind of classic dungeon is a bit haphazard; all kinds of enemies thrown in with no explanation of what they're doing there, and seemingly random encounters. Why is there a shopkeeper? Why is there a boatkeeper? How does he make his money - who's actually going across this river? Of course, the need to try and give the dungeon some kind of reason is what led to the classic "The ecology of the..." series in Dragon magazine. You can't just stock a dungeon, there has to be a reason to it, an ecology, an economy, and so we get these somewhat bizarre "The ecology of the vegepygmy", "The ecology of the beholder" articles. But I have to say, in defence of the seeming randomness of dungeon encounters in this book, I rather like it. Why do we move from a cavern to a splendidly decorated room with a polished marble floor and portraits? Why is there a little old man in a rocking chair? Why does the Warlock leave the very things that can destroy him lying around? I can't answer all those questions, but I think that realism is just one tool in fantasy narrative. Not everything has to be completely realistic, and at its best these kind of encounters meld into something like a dream sequence... I call this dream realism, a narrative that looks to capture something of strangeness of the dream, with all of the unconscious connections and segues and symbolic wierdness you get in a dream (or a nightmare), rather than being slavishly chained to the "real world" of logical causality. 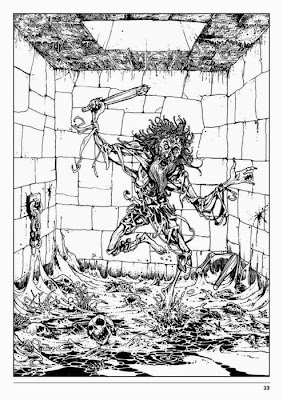 Then, in the second half of the book (the half written by Steve Jackson - the two authors split the labour between them), you get to the labyrinth. Bloody hell, what a boring sequence of entries!

And yet... and yet... I have to say I actually got lost. Very lost. Completely and utterly disoriented, ended up going around in circles, and it took me ages to get my bearings. It was a frustrating gaming experience, but it was certainly an immersive gaming experience. Really felt like I was going around in circles in a dank tunnel. I'm not suggesting that boredom should be part of the toolkit of narrative gaming (or am I?) but this section, because of the sparseness of the text, because of the circularity of the movement, and above all because of how frustrating it was, really gave me a sense of disorientation that I don't think I've experienced in gaming before. Disorientation and frustration as narrative tools...

The big boss baddie at the end was too soft and easily dispatched, and I was left wondering on more than one occasion why I was so set on killing him in the first place. But the idea of killing him in order to replace him, to become him... and to wait for somebody to come and kill me to replace me and to become me... that's an interesting one.

"The priest who slew the slayer,
And shall himself be slain."
- Thomas Babbington Macaulay, The Battle of the Lake Regillus; recalls the legend of the priesthood of the Goddess Diana at Lake Nemi. The only way to hold the honour was to slay the prior incumbent in a trial by combat. And then to wait...
Posted by robotforaday at 06:15 3 comments: