Battle Report: The Despoliation of the Wirheal


From "Notes from a damp and insignificant islet" by Willhelm von Brissen:
Of the Wirheal, this much can be said: it is a peninsula.

Back during the first weekend of July, VanLoon, Thantsants, and myself gathered for Gauntlet, the Deeside Defenders annual show. Our task: to avoid buying too much from the traders, and to have a small campaign of linked warhammer games with our Chaos Warbands. We failed in the first task, but succeeded admirably in the second. This is a reasonably short account of the campaign we played. I don't have so many pictures, which is partly why it's so abridged.


The backstory
In recent days [in fact, Gauntlet 2014], hordes intent on treasure hunting found and ransacked the chapel of the Forgotten Goddess Deva.

Now the Wirheal is weakened. With the Goddess Deva has been thrown out of her resting place, the land that once slept has been rudely awakened. Bands of marauders pander to the whims of their foul patrons, desecrating the land and pillaging its most sacred locations.

YOU are the champion of a god of Chaos. With your band of miscreants, you are intent on despoiling this corner of Albion. Glory and eternity await: but first you must prove yourself against the followers of rival gods. And the mysteries of the Wirheal will pose their own challenges.

From "The Highways and Byways of Perfidious Albion" by Willhelm von Brissen:

Near the hamlet of Birwall are the ancient burial mounds known as "the bonks"*. Believed by superstitious folk to be the resting place of the feared warriors of days best forgotten, very few will admit to going near the mounds, and those that have passed by at night speak of unnevering forms and sounds appearing amongst the bonks. Children, characteristically reckless in their youthful exuberance, are much less inclined to treat the mounds with awe, and take great pleasure in the innocent pleasure of rolling eggs down the banks of the mound. Sadly, several children have lost their lives in recent years, torn asunder by the talons of giant eagles and owls while hunting for ever-larger eggs with which to impress their friends.

(* based on true history - there used to be mounds known locally by this name, levelled to make way for Birkenhead Park)

The three warbands converge on the burial mounds, intent on looting them. 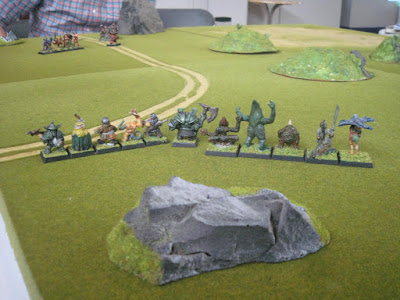 Dimspittle, champion of the Divine Tuluk, is the first to reach the a burial mound, but the chill finger of the Barrow Wight defending his barrow is too much for him. 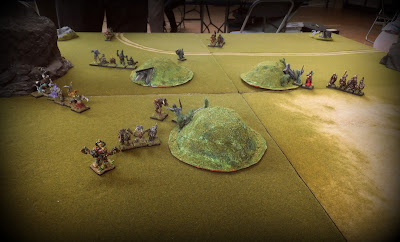 His followers are left to finish the work of robbing the tomb. Their leader may be dead, but they are rewarded with great treasure... a Frostblade! 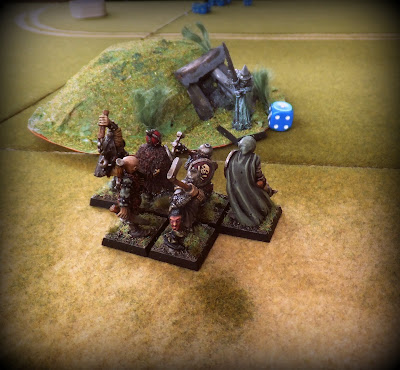 As the rival factions clash, The Poison Dwarf, Champion of Nurgle, fares better in combat and bursts into the tomb, bringing out a Cursed Blade. 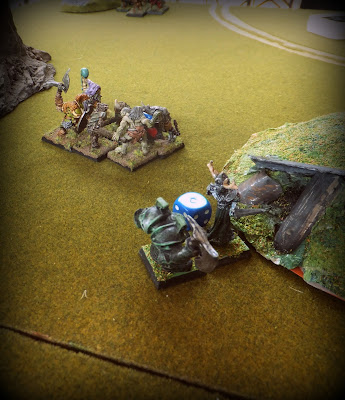 While Boris Forktongue is rewarded with a Spell Shield. (Very useful in a game where nobody has brought any magic users.) 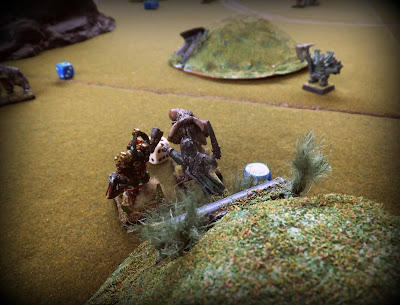 The bonks all well and truly pillaged, the forces of chaos turn their attention to their next target...

Game 2: The Monastery at Birwall

From "And may it sink beneath the waves!: Further enquiries on the topography of Albion; or, why does my editor keep sending me back to this godforsaken rainy backwater?" by Willhelm von Brissen

The hamlet of Birwall would scarsely attract the notice of even the most stimulus-starved of travellers were it not for the monastery here, which offers refuge for the weary and has a monopoly on ferry transport across the river. Though the small community of monks claim to be holy men of great charity, the extortionate rates they charge for safe passage tell a rather different story, as does their stockpile of crude weaponry. The monastery contains a modest library of chained books. Though one would be most foolish in expecting tomes of true learning to be kept in such a place, it is nevertheless possible that some of the manuscripts may be of interest to scholars wishing to understand the backwards beliefs of the people of this corner of the isle.


It is natural that the followers of the Gods of chaos should want to the lay waste to the home of the priests of pious men. Yet they seek out the monastery not only with destruction in their hearts; but also with a lust for the knowledge that will lead to the slow death of the Wirheal itself. They seek the location of the Green Knight, and such knowledge is to be found in the pages of the books in the monastery library. The monks steadfastly block their way. 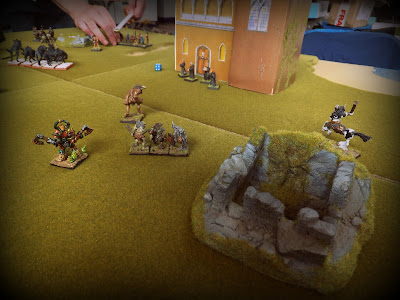 The campaigners for Brehkshhit and Tuluk reach the doors of the monastery quickly. The monks do their best to prevent them from gaining access, though their incantations have little effect. Meanwhile, the beastmen of nurgle attempt to clear the way of Brehkshhit supporters for their own champion. 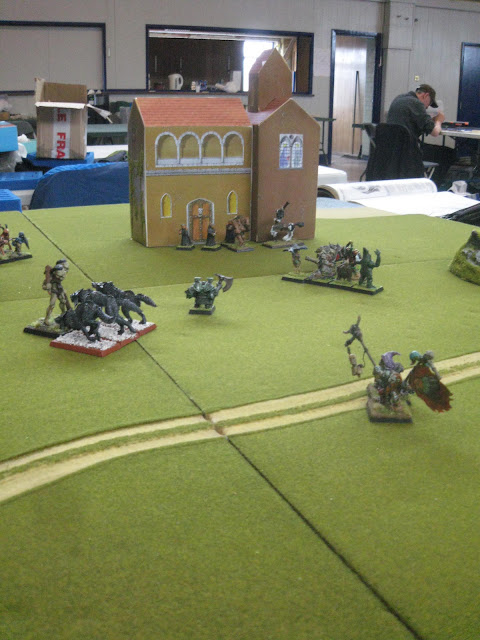 The monks turn out to be little more than a nuisance, as Mongo, now de-facto commander of the Tuluk force following the death of Dimspittle, insists that he has first right to access the monastery. 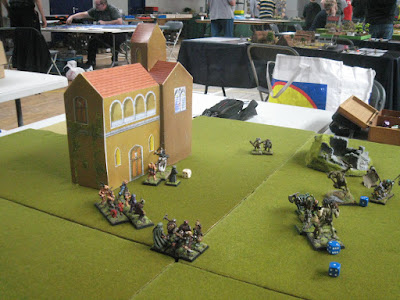 Meanwhile the Poison Dwarf has had to do his own fighting, following the disappointing performance of the beastmen in his charge. He proves more than a match for the Brehkshhit thugs, but quickly finds himself surrounded. 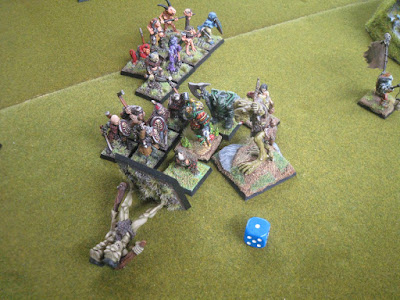 Meanwhile the way is clear for Mongo to enter the monastery library and to find the tome containing the fabled whereabout of the legendary Green Knight. One question remains. Can he read? 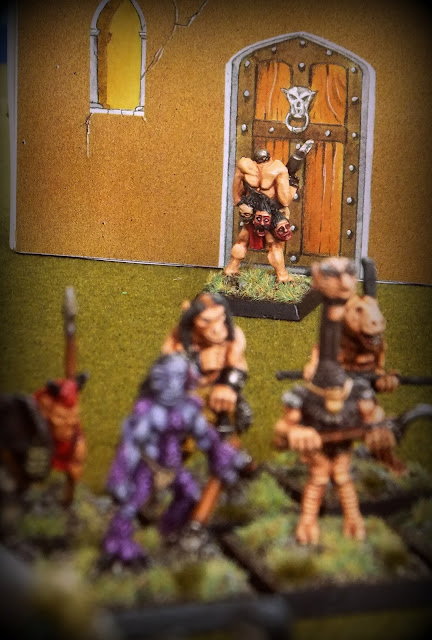 While Mongo tries to hold a book the right way up, outside things have got rather messy. The troll Yuukip has spewed up bile, which not only renders the Poison Dwarf incapacitated, but also splashes back onto Boris Forktongue and takes him out too! The followers of Tuluk make good their escape with the knowledge they seek while their rivals clean up the mess. 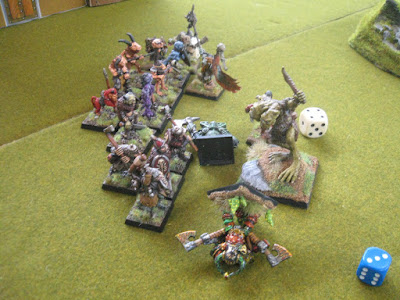 Game 3: The Chapel in the Woods


From "A Walk in the Woods; or, why don't they cut these trees down? - a modest proposal to speculators about the business opportunities afforded by the exportation of lumber from Albion" by Willhelm von Brissen

Locals speak of a long forgotten "green chapel" in an unknown location deep in the Forest of the Wirheal, associated with a figure of legend known as the "Green Knight". The Green Knight is said to be the champion and defender of the Wirheal. For as long as he lives, the forest shall grow green and thick. But should he die, it is said that the forest will die with him and all manner of wickedness shall emerge from its rotting stumps. Your humble writer's dilligent enquiries revealed that nobody can offer any clue as to the location of the chapel, and as nobody has ever actually seen this so-called knight, such tales can safely be discarded as drunken foolery.


Nestled in the woods are the ruins of the Green Chapel, the location as revealed in the pages written out by monks many generations ago. Mongo and the devotees of Tuluk approach the crumbling walls... but they have been followed! 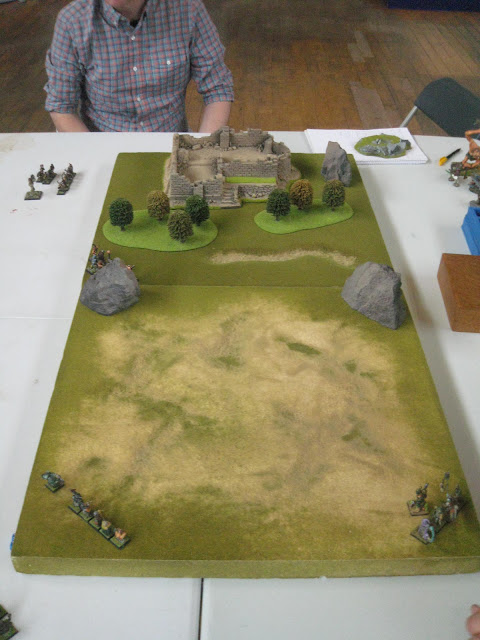 Mongo crosses the threshold of the chapel first, the beastmen of Tuluk a few steps behind in support of their champion. They try and make good their early arrival as the rival warbands close in. 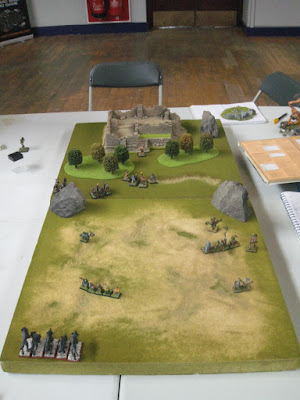 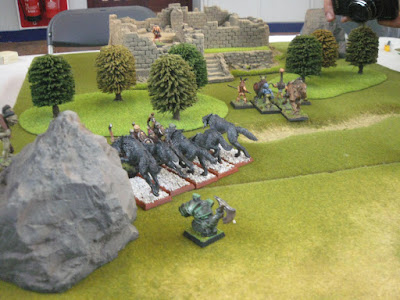 Hounds from across the marshes chew on the warriors of Tuluk, allowing the Poison Dwarf to pass unmolested. 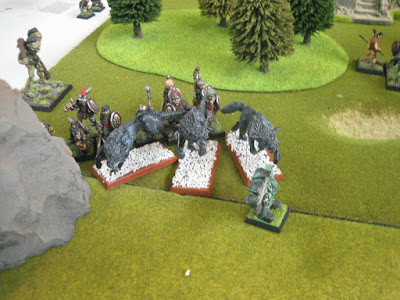 Meanwhile, Mongo rounds the corner and comes face to face with the Knight Who Says N... I mean, the Green Knight! Frostblade in hand, he charges... 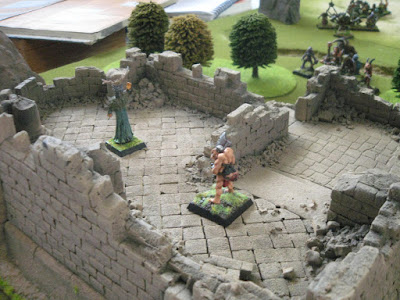 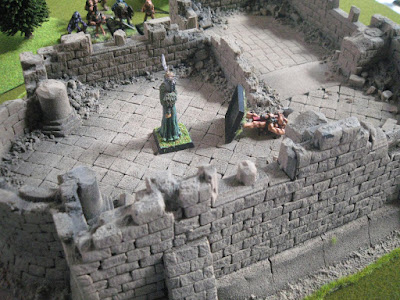 As Mongo breathes his last, the Beastmen of Tuluk hold back a minotaur on the steps of the palace, seemingly oblivious to the sound of their leader's failure. 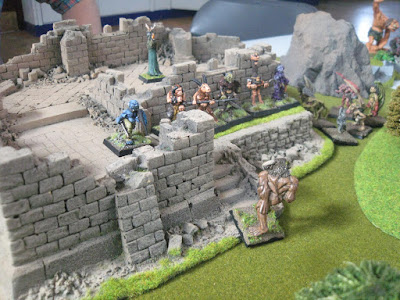 The harpies of Brehkshhit swoop in but can do little damage. 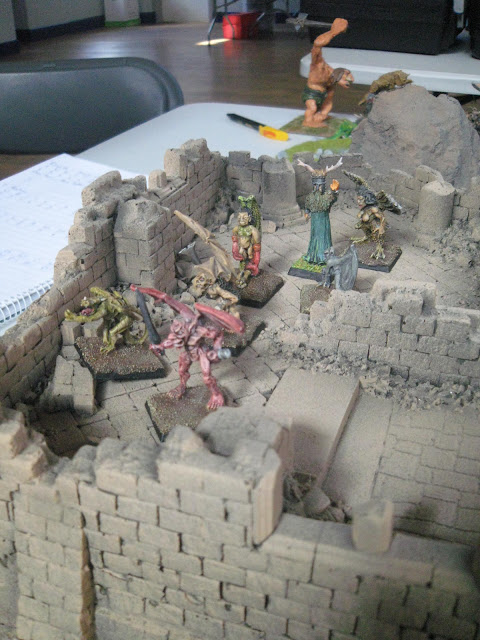 While Boris Forktongue and the Poison Dwarf engage in heated debate, three plague toads of Nurgle fight to consume the body of the Minotaur they have snatched from combat with the beastmen. 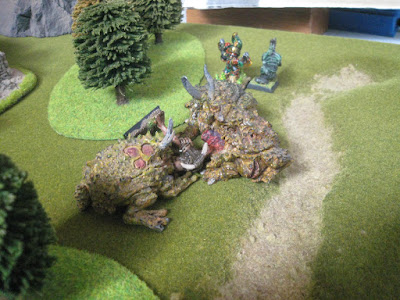 The beastmen, meanwhile, advance and, picking up the Frostblade dropped by their leader, attack The Green Knight once more. 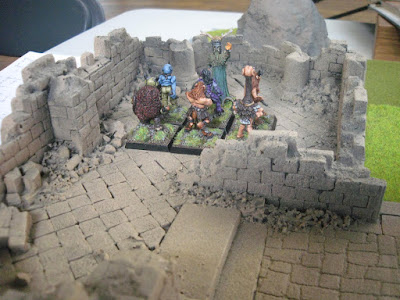