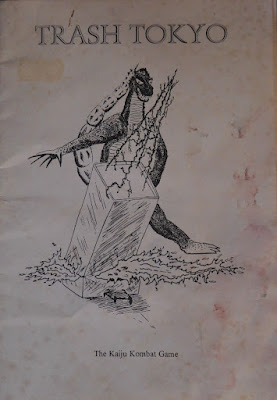 No idea who needs to hear about this, but I bet someone does! I reckon I would have picked this up in the wargames/rpg shop in the Liverpool Palace back in the day.

Trash Tokyo is a beer n'pretzels style wargame that enables you to simulate the classic monster movies of Japan - Godzilla, Mothra, Ghidorah and the like. It's designed for 1/300th scale figures, so lots of teeny tiny civilians getting stomped while lots of tanks try to take down a giant monster. (Just the right scale for the monster to be represented by a toy)

It's a simple set of rules (as befits a 16 page booklet). There are three types of unit: Civilians, whose "main purpose is to run, screaming, from the monsters attacking their city"; Military, including squads of soldiers, tanks, and mecha; and Monsters. Everything has movement values, defence values, and attack values for the various weapons. Buildings can and should be smashed up. There is nuance in the various types of attacks: chemical, cold, electrical, heat, impact, light, mental, radiation, and sonic. This is important because some monsters are more vulnerable to particular kinds of attacks. There are reaction tables for screaming civilians and monsters running amok. 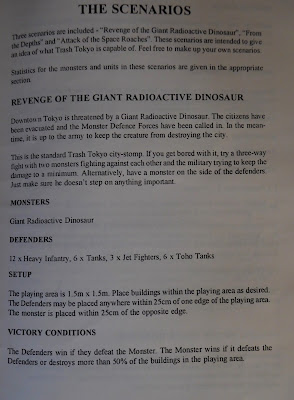 My favourite bit of the book when I got it as a teenager was the list of scenarios, "Revenge of the Giant Radioactive Dinosaur" (pretty self-explanatory); "From the depths" (an ancient God is awoken from its slumbers beneath the sea); "Attack of the Space Roaches" (battle against a flying saucer, alien infantry, and hover tanks...) I spent several hours thinking about how to link all of the monsters into one super-meta campaign (a nuclear weapon dropped to destroy the Giant Prehistoric Caterpillar on a pacific island awakens an Ancient God; the resultant battle attracks the attention of space aliens who are only finally seen off by Hyperguy)... but inevitably I never actually played the game.

Maybe someone with lots of 6mm stuff would like to give it a go? In fact, I discovered in the course of writing this that most of the rules are online and can be found here, so there's no excuse not to! I'll bring a Robosaur... 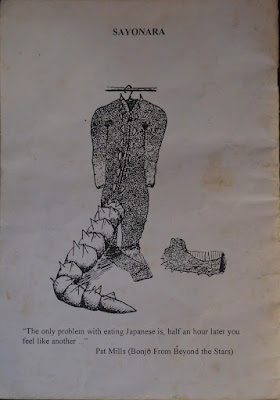