Interesting exchange of views on the Oldhammer facebook group about this historic figure: 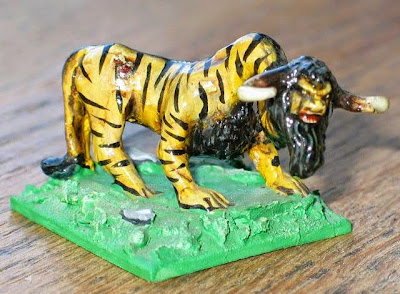 It's a unique conversion by Bryan Ansell, painted by John Blanche, and many of you will recognise it as the Xaxus Chaos-Thrall conversion detailed in the First Citadel Compendium. I've loved that particular article since I first saw it - the situation is one that anybody rolling up chaos attributes finds themselves in: "how the &%@$ am I meant to model that??" And so with the help of razor saw, wire, and milliput, a Citadel Weretiger is given a Dwarf's head with added horns, a unnaturally long neck, and bob's your chaotically malformed uncle. 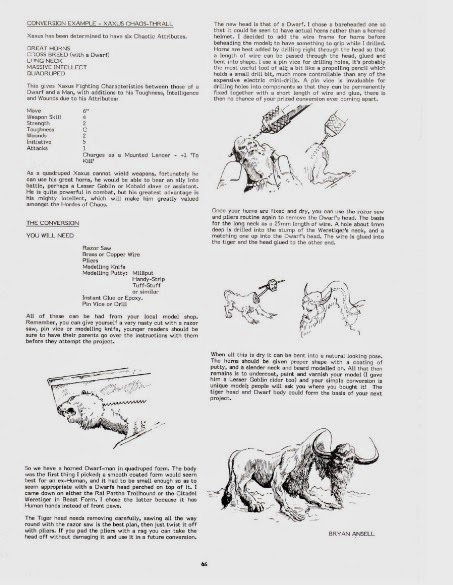 As one would expect, this was the cue for an old school love-in. Until someone (name redacted to protect the innocent!) decides to break ranks and say: "That model and the painting are so horendously ugly!" Later on the same fellow explained himself a bit more "compared to today's standards, the model is butt-ugly... I admire the thing for the historical value, especially becáuse things have progressed so far and wide. What do you think would have happened if this was made one month ago, and posted on CMoN for example? I'm sure you agree that from an objective standpoint, the model is horrible. The painting is flat and undetailed, the sculpting of the model very basic and out of proportion. It only makes sense when looked at in context of the time this was made, compared to later stuff, the difference is stunning."

Well, that definitely gave me food for thought. I can see where he's coming from, of course. Enamels can look very strange in a world of acrylics, and it certainly doesn't have a naturalistic feel. On the other hand, one could argue that it's not meant to look naturalistic, and the point about being "out of proportion" doesn't really work when the nature of chaos mutations is to distort proportion! To me, it has the feel of something from a medieval bestiary, or a weird creature in the marginalia of a monastic manuscript... not a thing of this world, but a thing of fantasy. But sure, I suppose one has to agree that the technique is crude compared to what we see from virtuoso painters today (and, of course, compared to Blanche's own later virtuoso painting). But is technical skill a virtue in its own right? For me, what this model stands for is the triumph of imagination. Yes, people's craftsmanship and skill at colouring-in may have improved. But is "the hobby" as creative, as imaginative, as open to inspiration? I'm astonished to hear anybody talk about "progress" in this way, especially in this group. Technical progress has been made at the expense of joy.

I am a pretty poor painter myself, and I don't want this to come across as making excuses for poor technique. I like looking at the work of many of the master-painters I've come across in this community, and I do try and learn lessons from the excellent work I see because I want to get better. Many of the people whose blogs I have in my blogroll I follow in part to learn from them. (Whiskey Priest, Thantsants, Asslessman, and others.) But it's never just technique for its own sake... I would always prefer an average paintjob that is memorable and imaginative and tells a story of its own to a virtuoso paintjob that is forgettable. I mean, I looked at Coolminiornot after reading this exchange on facebook, and I agree, there's some amazing technique on display, and probably if this conversion was posted there it would be panned. But here's the thing: after looking at some of the top submissionthere, 5 minutes later I couldn't remember a single one. Absolutely nothing about them stuck in my mind. Why? Because they didn't tell a story, because they didn't capture something imaginative. Whereas that Ansell/Blanche creation is immensely memorable because (in my opinion) it's impossible to look at it WITHOUT telling stories about it. Technique is all very well, but its no guarantee of wonder. That's why I generally prefer quirky 80s sculpts to the perfect CAD models of today. Often they're not accurate or naturalistic, but they make me want to play because I start to imagine the worlds they inhabit and the adventures they'll have.

What I'm saying is that technique, while important, can become the enemy of imagination. If you're so concerned with being "naturalistic", then you're not open to the world of fantasy and the weird and wacky possibilities of the universe of imagination. And if you're so concerned with trying to imitate the technical style of particular experts, then you're giving up control of your own imagination to somebody whose work is held as an ideal. You're just doing cover versions that are never going to be as good as the real thing, when you could be doing something unique instead.

I was reminded of a fantastic article by Matt Stevens in Issue 37 of the RPG fanzine Imazine back in 2002. There he argues "Most rolegamers, it seems, judge artwork on the basis of its realism and professionalism. They condemn the amateurish scribbling of the early rolegames, comparing them unfavourably to the slick colour prints of today. I'm not sure that rolegame artwork is getting any better - in some ways, I'd say it's actually getting worse." Yes, he accepts that the skill of the artists has improved. But the illustrations no longer intrigue the spectator. Good draughtsmanship is on display, but it doesn't conjure up anything in the imagination of the people looking at it. The basic argument that Matt Stevens makes there is that some of the original 1970s D&D monsters manual entries, amateurish as they may be, haunted our imaginations and made us want to play. Do the polished illustrations of the early 21st century do the same?

"What distinguishes the best rolegame artists from the mediocre ones? If you could summarize the difference in one word, it’s imagination. The good ones show us things we never saw before, while the hacks churn out the same stuff over and over again." I agree: and I'd say that if you want to learn about imagination, you'll get more out of that Ansell/Blanche conversion than anything on Coolminiornot. And then... this is the important bit... don't try to imitate it. Instead, do your own thing. Tell your own story.
Posted by robotforaday at 13:38 11 comments:

Email ThisBlogThis!Share to TwitterShare to FacebookShare to Pinterest
Labels: But what is Oldhammer?, In praise of the old school, Painting

One tartan to rule them all?

So I was about to start painting the highlanders that I've got ready for Whiskey Priest's Oldhammer challenge, when suddenly I was paralysed with angst and self-doubt.

Not so much an existentialist crisis as an example of the kind of annoying niggles that crop up everytime I need to make a big painting decision. And the big question causing all the hesitation was this:
Should I paint the kilts of the clansmen all in one tartan, or should I go for a load of different tartans? 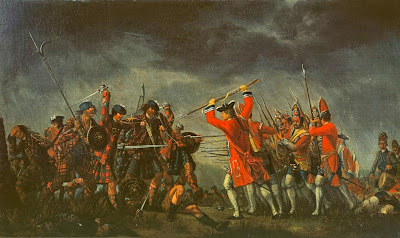 An incident in the rebellion of 1746, by David Morier - note the highlanders are wearing several different tartans.

If I was an historic gamer, there might be a somewhat definitive answer to that: if I was wargaming the Jacobite uprising, say, the evidence would point to the fact that the warriors wore a whole gaggle of tartans. Certainly the idea of everyone wearing a common "clan tartan" is a much later development, and in terms of battle dress has more to do with the raising of the Highland Regiments in the 18th century, when each regiment was dressed in a uniform tartan. It's only really with the highly dubious claims of Vestiarium Scoticum of 1842 (largely a historical fabrication - FABRICation, geddit? eh? HAHAHAHAHA oh forget it) that we derive the idea that there was such a thing as historic tartans associated with particular clans, taken up by the Highland Society of London... and kiltmakers have been trading on that ever since. So it's kind of a 19th century fantasy of how Scottish highlanders used to dress. But then, what we're wargaming here is fantasy.

The Albion clansman designed for McDeath, all decked out in their highland dress, inhabit a romantic dream, born of Sir Walter Scott's "Land of brown heath and shaggy wood,/ Land of the mountain and the flood", but in the hands of the Games Workshop designers it's a dream cut through with 1980s British cynicism... competitors at the Highland games become rival football hooligans armed with broken bottles facing off over the playing field. (Incidentally, the Warlord Games "arrant scum" selection of beer swilling highlanders captures this mixture of romance and hooliganism quite nicely.) High fantasy with a vein of snide humour.

Such is the nature of fantasy - the past as it is imagined, and as we use it to tell stories about the present, not than the past as it was lived. So ultimately, the question is which fantasy I want to depict when I come to paint these wee fellows: the fiercely independent highlander banding together with his fellows, or the loyal men tied to kin and territory through unbreakable bonds of blood.
Posted by robotforaday at 14:10 9 comments: