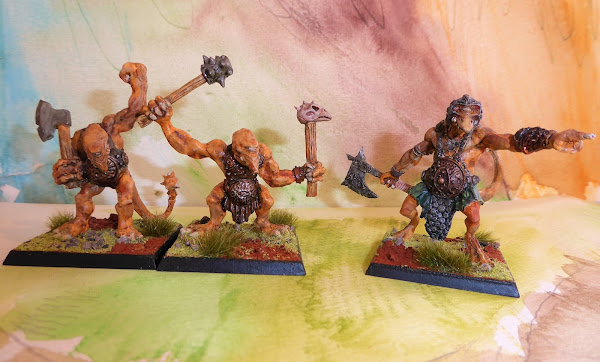 As I was pondering the size disparity, I thought I'd try and do something relatively useful, and photograph the different styles of 40mm based fimir I possessed together so you can see how they line up along one another.

What conclusions can we draw from this? Well, not much really; other than that the Nick Bibby fimir are somewhat squatter than many of their more recent counterparts (though Krakon games does have a variety of shapes and sizes of fimir; see below) - and that Steve Whitehead's forgeworld fimir, while atmospheric, has armour that isn't particularly in keeping with the classic feel. All of which is a bit banal. So I thought I'd take it a step further and go for a complete cataloguing of all the different kinds of fimir I have.

Because, famously, the fimir aren't all of a size to be stuck onto 40mm bases. The well known tale (technically apocryphal, though endorsed by some in the studio at the time) runs as follows (Graeme Davis, quoted on the Terminally Incoherent blog:)

"The popularisation of Fimir wasn’t helped by a communications foul-up when Nick Bibby took over making the miniatures from Jes – Nick made them all Ogre-sized, compared to Jes’ and my idea that they should be Orc sized. So we had big, expensive miniatures with low game stats, and nobody bought them."

This creates a kind of strange redundancy around the smaller models citadel made - including the most ubiquitous and famous of all fimir. 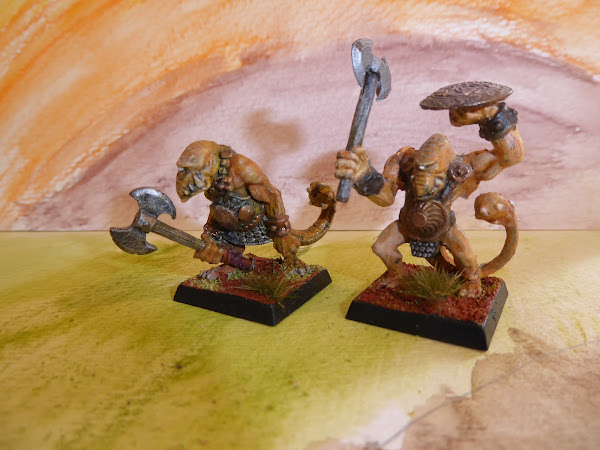 So on the left we have the Citadel LE fimir sculpted by Jes Goodwin; and on the right the HeroQuest fimir (with a scibor shield). You can see here the size disparty with the Nick Bibby models - and in my view these models would look all at sea mounted on 40mm bases, rules lawyers be damned! 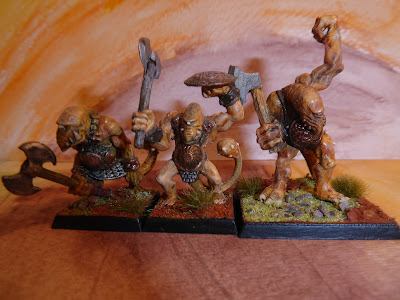 So what other fimir are there that can be mounted on 25mm bases? 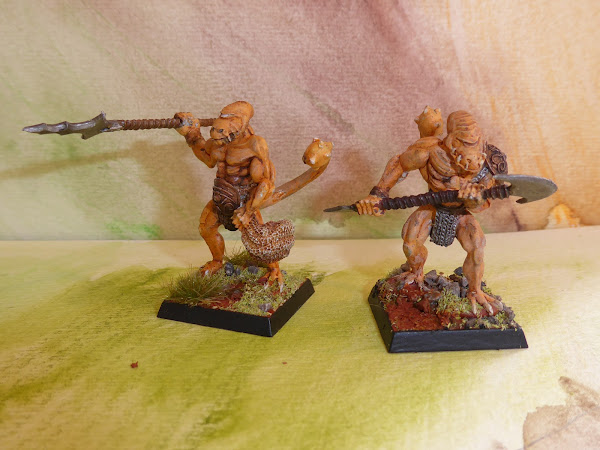 These 'bog raiders', sculpted by Nicolas Genovese, only seem to be on sale very intermittently from Blood Moon Miniatures' website, but they come with a variety of weapons and are very clearly inspired by the HeroQuest fimir, while having a certain reptilian quality of their own. I do like them, but they are very... taut, I think would be the word. In fact, they look as though they've been doing a cross-fit programme; whereas I kind of imagine most fimir to have a bit of a paunch. Also, if you look at this picture of one alongside the HQ fimir and a Nick Bibby fimir, you'll see that they're quite tall - taller than the 'ogre sized' fimir! 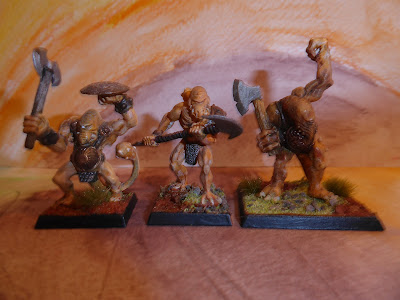 But still (to my eye) with more of a 25mm footprint. All in all, these are models that are very hard to 'mix in' to a unit, and need to be treated very much in a stand-alone way.


Oakbound Studio
Oakbound produce Myeri for their game The Woods - and indeed it was Geoff Solomon-Sims' desire to produce one-eyed swamp monsters that launched the miniatures range which gave rise to the game. I bought the first set that he cast (now oop), and they're still among my favourites: 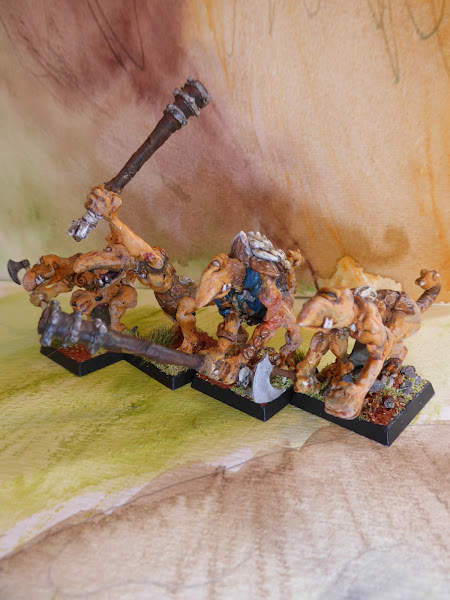 Geoff takes very clear inspiration from The Dark Crystal here. Hunched over and wide-eyed, their faces have more pathos than most fimir - less easy to pin down simply as comic-book villains - and they look great as a unit. As you'd expect from the first models commercially released, the casting raised a few logistical issues. He's since sculpted and released another range of Myeri, inspired by - and with permission to use - Alan Lee's painting of the fomorion which was indeed the initial creative impetus for the Citadel studio. 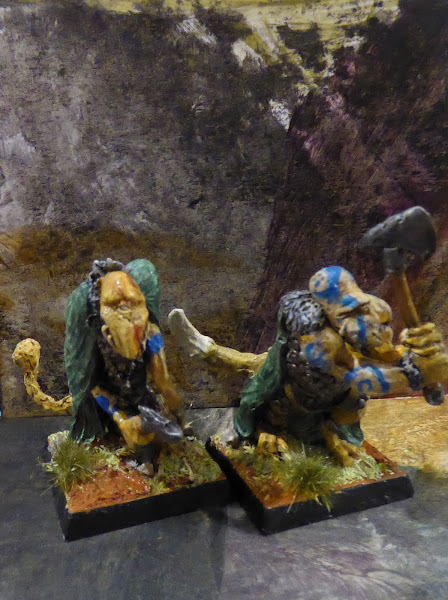 As a result, given this common conceptual origin you can see how the recent range converges with the Jes Goodwin fimir sculpt. 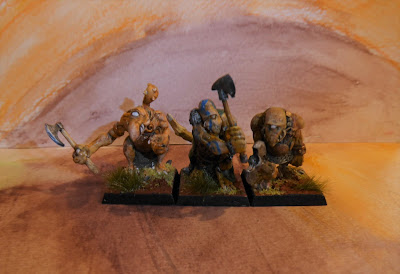 Krakon Games
As I noted above, Krakon games produce fomorians in all shapes and sizes - both Nick Bibby 'ogre size', and Jes Goodwin 'orc' size. In my opinion, Ross Whitehorn's smaller sculpts are exquisite and can keep excellent company with the Jes Goodwin LE fimir and the most recent iteration of the Oakbound myeri. 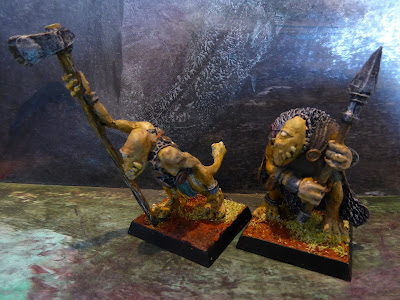 Another point worth noting is that Krakon games also supply all manner of fimir 'bits' - heads, tails, etc - again in the larger and smaller sizes, for all of your conversion needs.


So that almost concludes our little tour, except for one more:
Impact Miniatures
Impact Miniatures, who have a wide range Blood Bowl-style minis, provide a the ARBBL Chaotic Warrior, sculpted by Clint Staples to a designed by Melvin De Voor. If you overlook the the rugby-helmet style head protection, the fact that theres a football on the armour - as well as the fact that it's not carrying weapons - this is also a very good sculpt and ripe for conversion - as you can see I've given mine a net (from Gripping Beast) and a whip. 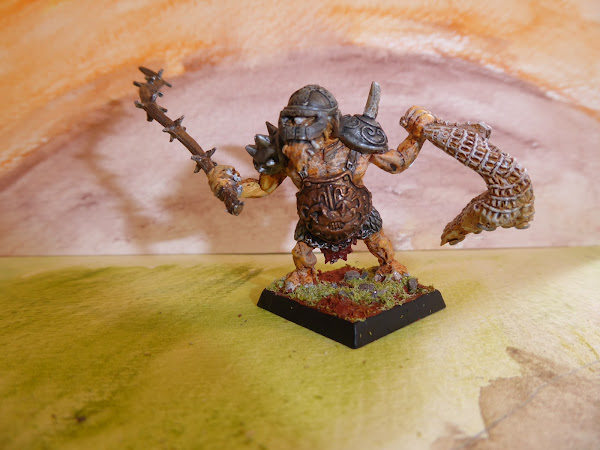 Well, that's about all I have to say/show. Here you can see all of the different types of small fimir in a row to get a sense of how they compare: 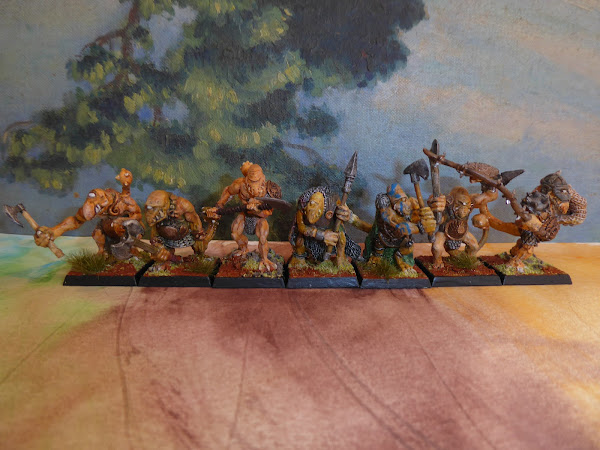 and finally, slightly less clearly but for the sake of completeness, the different small types in front of the different large types. 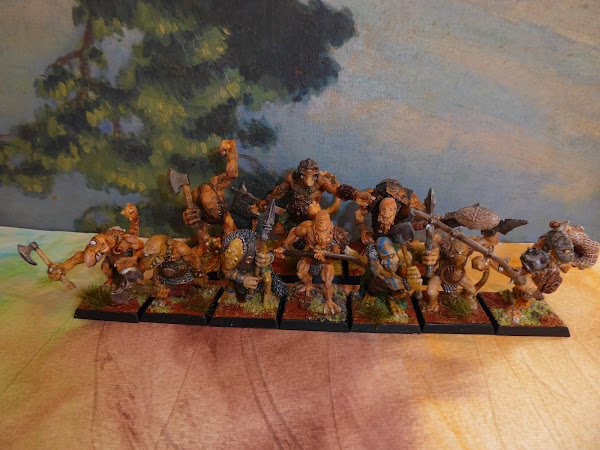