My son's contribution to Gnomevember 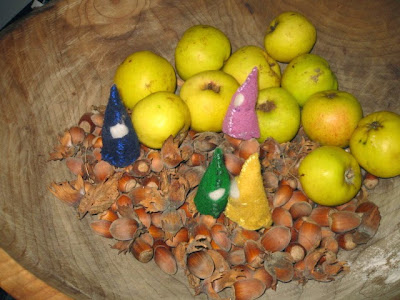 My son has been getting into the spirit of Gnomevember by making some gnomes at school. Do not be fooled by the charmingly colourful exteriors, they're mischievous little blighters. Little bit on the big side for 28mm, but still, he's putting me to shame with his Gnomish productivity.
Posted by robotforaday at 09:42 No comments:

Email ThisBlogThis!Share to TwitterShare to FacebookShare to Pinterest
Labels: Gnomevember

Away from Gnomevember's painting regime, and up north amidst family anxieties, on this Monday morning I retreat into a pleasant world of idle thought and imagination to offer some meanderings on the subject of Gnomes.

Graeme Davis, the designer of Warhammer Fantasy Roleplay, has celebrated Gnomevember by posting a Brief History of Gnomes in Warhammer. It seems that gnomes were one of those races that just couldn't be left out, but nobody gave too much thought as to how exactly to fit them into the Warhammer World, other than a statline: "Back in 1986, Citadel did have a few Gnome miniatures in its catalogue, so I included stats for them in the WFRP1 Bestiary. I’ve written before about how I tried to include stats for every miniature Citadel had ever made." Gnomes weren't included in the rulebook as a player race, although rules and background were written up in White Dwarf 86, and later reprinted in Apocrypha Now.

There we learn that gnomes are smaller cousins of the (already pretty small) dwarves. They are clannish, don't mix well, and spend most of their time in burrows or cavern networks underneath hill ranges. They like fishing, preferably in underground lakes: "Indeed, the Gnomic skill with rod and line is almost legendary." They have a sharp wit, and a liking for practical jokes; these characteristics have led to their being employed as jesters in royal courts. 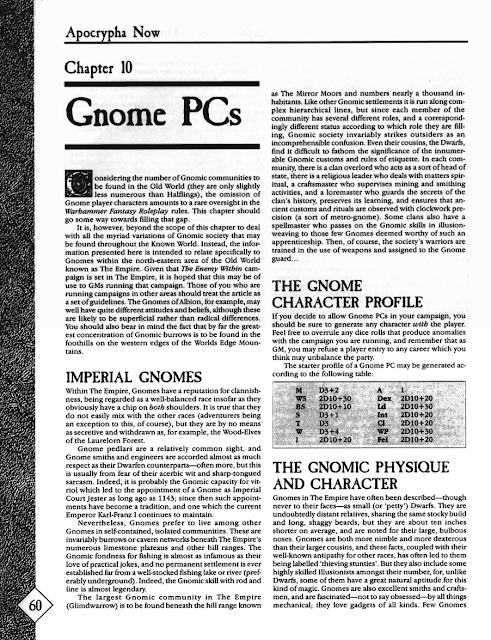 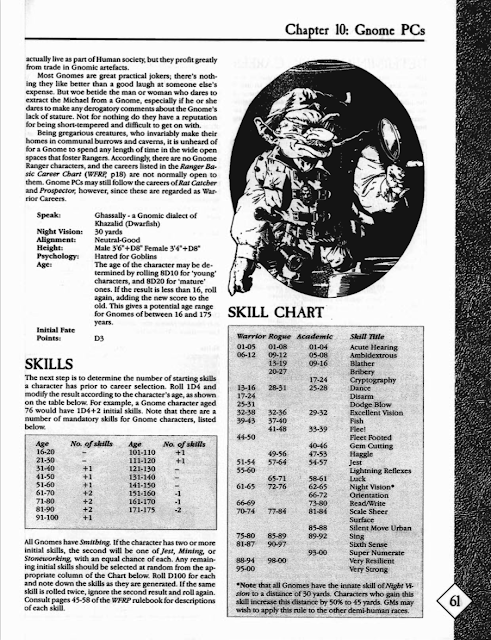 So some excellent broad hints as to what they might be like, but thankfully left wide open for us to fill in the blanks with our own imaginations. Thus, here are 3 brief reflections on gnomes and why I think they are important:

1) Like fish through water, gnomes pass through the earth 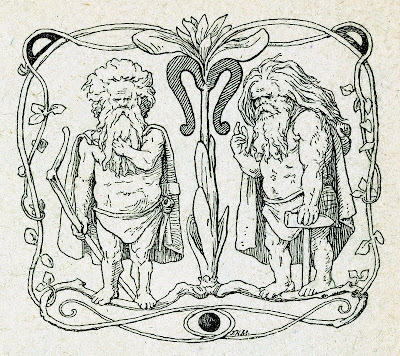 Hence, Gnomes are elementals. Not only do they have an affinity with the earth, a sense of that element being their home, passing through it as easily as fish through water, they embody the essence of the earth and are protectors of it.

2) Gnomes are the epitome of naff 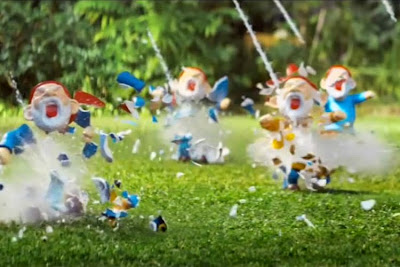 Back in 2013, Ikea produced an advert that featured a middle class couple replacing their garden furniture with generic Scandanavian crap, only to have their garden gnomes fight back against the bland psudeo-modernist aesthetic. The couple are left with no alternative: they must slaughter the gnomes, each and every one.

Some people didn't like the advert and complained to the Advertising Standards Authority. But the message was clear: gnomes are naff. They are suburban, twee, sickeningly cutesy, everything we love to loath.

Maybe gnomes are naff. And that's why the Warhammer World needs them now more than ever. Without rehearsing the old anti-GW arguments, with which everyone's familiar, especially in these "end-times" times, right now in Warhammer everything is big, apocalyptic, grimmer than grimdark, END OF THE WORLD EVERYONE WILL DIE, massive multi-part plastic toys will RISE FROM THE EARTH AND DEVOUR US ALL and there will be SLIME and SKULLZ and WAR. In such a world of idiotic hyperbole, these little gnomes are completely out of place. They're too small. They're kind of cute. They don't conjure up images of endless war and suffering. That's why they are important, and why I'm going to make sure that at least a few of my gnomes have red pointy hats and white beards. Their very presence reminds us of the pathetic aesthetic and stops us getting carried away by a narrative arc so unbelievably hackneyed that it makes Dan Brown look like Dostoevsky.


3) Gnomes are the tricksters of the underground 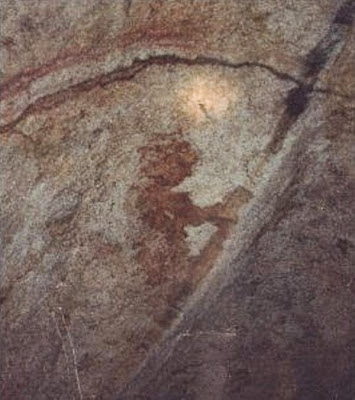 Gnomes, like their close ginger-haired relatives the Leprechauns, are troubling because we don't know whether to take them seriously or not. Are they mocking us, tricking us, or warning us?

From British Goblins, by Wirt Sikes (1880): Under the general title of Coblynau I class the fairies which haunt the mines, quarries and under-ground regions of Wales, corresponding to the cabalistic Gnomes. The word coblyn has the double meaning of knocker or thumper and sprite or fiend; and may it not be the original of goblin? It is applied by Welsh miners to pigmy fairies which dwell in the mines, and point out, by a peculiar knocking or rapping, rich veins of ore. The faith is extended in some parts, so as to cover the indication of subterranean treasures generally, in caves and secret places of the mountains. The coblynau are described as being about half a yard in height and very ugly to look upon, but extremely good-natured, and warm friends of the miner. Their dress is a grotesque imitation of the miner's garb, and they carry tiny hammers, picks and lamps. They work busily, loading ore in buckets, flitting about the shafts, turning tiny windlasses, and pounding away like madmen, but really accomplishing nothing whatever. They have been known to throw stones at the miners, when enraged at being lightly spoken of; but the stones are harmless. Nevertheless, all miners of a proper spirit refrain from provoking them.

This is the mythology of the "knockers", gnomes of the Welsh and Cornish mines. Good luck or ill omen? The sound of knocking was the creaking of the earth and the timber supports that preceded a cave in. Were they malevolent creatures who caused the cave in? Or well meaning creatures who warned the miners in time for them to escape?

The dark creaking claustraphobia of the mine is pretty anxiety-inducing. And just as I like my fimir to embody longstanding cultural anxieties about the fens and marshlands, I like that the gnomes embody an anxiety about the dangerous underground where they make their home. You do not know whether to trust them or not. They are tricksters within the depths of the earth.


Next up, I'll consider alternative gnome models and how they line up next to the classic C11 Citadel gnomes.
Posted by robotforaday at 05:19 3 comments:

Been a while since I updated the blog... to be honest, been in a bit of a hobby slump these past couple of months. It's not so much that I've lost interest, just that the energy expended in the run up to the Oldhammer weekend, and the excitement of the Bring Out Your Lead itself, meant that there was going to be an inevitable crash afterwards. Anyone else experience these post-BOYL blues? Added to which I'm very busy with work (and I'm lucky enough to do work that I love) and that's minimised any time or energy that I haveto get out the paints or get to games.

Part of the problem is that every time I had the urge to do some painting, all of the projects I've planned just seemed a bit overwhelming. So I decided I needed something a bit different, a manageable and interesting challenge to get me back in the game. I was considering doing something for Orctober, but I came a bit late to that. So what works for a November challenge..? 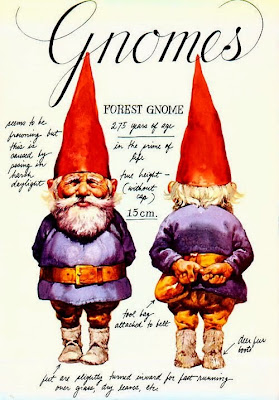 One of the most underrepresented of the oldhammer races, gnomes are full of character. Granted, the classic citadel minis can be a bit pricey on ebay, but many of us have a few kicking about, and there are alternatives out there that are worth looking for.

Seeing as I have 13 classic models already (12 citadel, 1 grenadier), I reckon I have a good number to start a small skirmish force/ allied contingent. There are always scenarios that need a few gnomes!

So over the next month, I have a few aims:

- Get some of these wonderfully quirky minis painted

- Get hold of some of the gnomes that are being produced by various companies today, and see whether or not they can fit alongside the old citadel models.

...and maybe even get a game in with them!

Anyone else want to join me in celebrating Gnomevember? Come on, is anybody's oldhammer collection truly complete without a bunch of these wee fellas?