Matthew Street's photos of Games Day & Golden Demon 1989 came up on my facebook feed today - why not check out his pics from the day over on his blog because, to give fair warning, it's going to be more interesting and nostalgic than this post! But if, like me, you're triggered by accounts of a certain Michael Thomas in a certain Liverpool game against Arsenal, you might want to give it a miss.

Anyway, it nudged me into thinking about the one time I attended Games Day & Golden Demon, back in 1999, 10 years after young Street's adventure. Memory is a fragile beast, and what's kind of disturbing is that I remember very little about the day. I went with GW Southport, who hired a coach down to take us down to the NIA in Birmingham, and I remember people passing copies of FHM and Loaded around the coach, this being still the era of the lads mag. I also have a very vivid recollection of arriving back home bursting for a pee, trying to subtly relieve myself behind Her Majesty's Revenue and Customs offices, only for a movement-triggered light to turn on and expose me to the world.

But of the event itself, I have very little recollection. Luckily, I have a few artefacts of the day. Apparently I got the programme signed by everybody, including by the looks of it the staff of the National Indoor Arena itself. 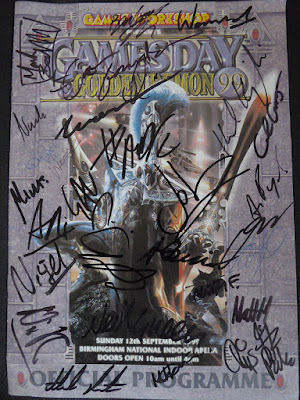 The mega display for that year was "The Vengence of the Vampire", of which I have absolutely no recollection. (No photos in the programme to jog my memory.)

One thing I do recall is that they'd brought one of plastic injection moulding machines, and were churning out Mordheim accessories sprues, Mordheim being GW's forthcoming release. 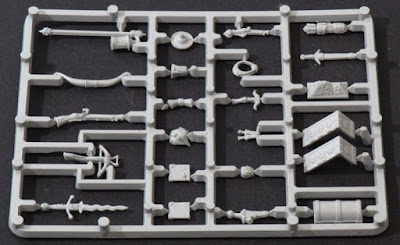 I think I queued to go around 4 or 5 times so as to pick up multiple sprues, and they've proved extremely useful for conversions over the years. (The above is a photo of the complete sprue from the Lost Miniatures wiki, the sprues I picked up at Games Day are mostly gaps now.)

Freebies were, I guess, one of the best things about the day (after the ticket I wouldn't have had enough cash to actually buy anything at Games Day) and have the benefit that they give me some clue of actually being there. I think on entrance they gave out these pretty cool Gorkamorka "teef" to wear around your neck 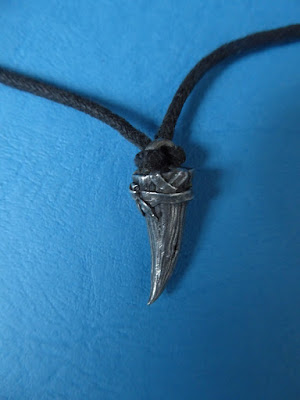 (also Ork-themed, GW Southport gave us t-shirts of an Ork shouting out "NORF NORF NORF!" to indicate our regional affiliation and no doubt to help their security to profile potential shoplifters, but I no longer have that, it was neat but I don't think the printing survived more than a couple of washes)

And one final memento of the day: just dug this out of my pile of gaming stuff and I'm really glad I still have it - I queued up for the Black Library desk where the artists were doing speed drawings, and Kev Walker sketched me this skeleton with an extraordinarily big gun for an "Undead in Necromunda" project as I working on. 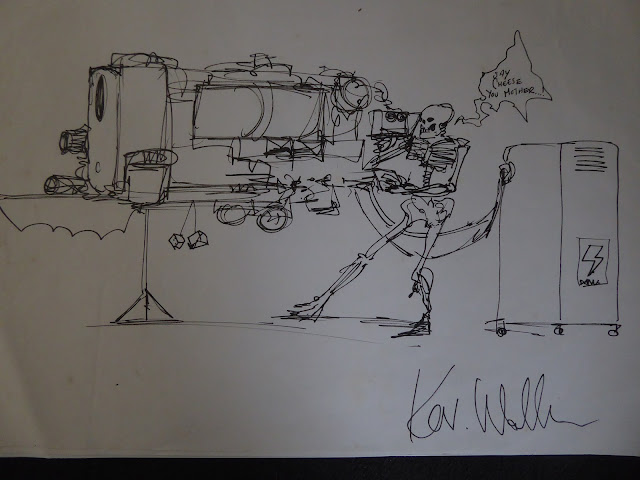 It's things like that that make it worth getting caught exposing yourself outside the tax office.
Posted by robotforaday at 08:10 No comments: