I'm not going to be able to make it to BOYL

A short post today, and rather a disappointing one for fairly obvious reasons.

Turns out I won't be able to go to the Foundry for the Oldhammer weekend this year - ironically, having scheduled a "Journey to the East" game set in the steppes, I will instead be heading out on a journey to the steppes of Mongolia myself... Hope you all have fun, I am gutted to miss it but will try and pack my gaming diary with other events to compensate for the loss. (So if anyone wants to invite me for a game before the summer to ease the pain of this loss, please do!)

I'm sorry to people who've started work for the game only to find out I won't be able to run this after all - I just found out my travel dates today, until now I had been pretty sure I was going to get up to Newark. Obviously if someone else wants to pick up the banner and run a orientally-infused game at BOYL, go for it.

It's a particular shame, as I had some figures for the game (kick-ass monks from the Monastery of the Dragon of the Midday Sun!) on the painting table, and was just starting to paint them when I got the e-mail through about my revised timetable and realised that all was in vain.
Posted by robotforaday at 04:49 6 comments:

Email ThisBlogThis!Share to TwitterShare to FacebookShare to Pinterest
Labels: Bring Out Your Lead 2015

Motion 1368, amendment B: With regards to the forthcoming elections on Beacon Island, this committee resolves to lobby the candidates for office with the intention of communicating the case for improved working conditions. To this end we resolve to send a delegation of labourers to set out our Union's position in as clear and direct a manner as possible. 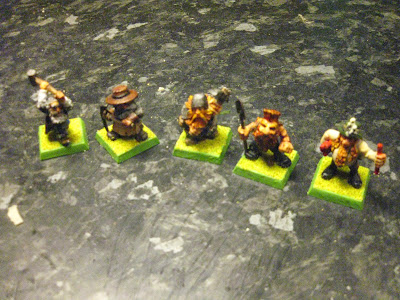 "Comrades, take hold of the tools of our labour. Carry aloft the pickaxe, the spade, the hammer. Today, let us strike a blow for the rights of all workers."

Up at the crack of dawn tomorrow morning, and off to the Foundry for the latest adventure in mysterious Albion, ably GMed by Warlord Paul (our most recent trip to Albion being The Last Stand of Antonius De Blare). The background that Paul's provided us with this time is as follows:

Rival warlocks are fighting amongst themselves for dominion on Beacon Island. There is an election tomorrow and the only occupants of Beacon Island (the lighthouse keeper and his family) have to choose a new governor with their handful of votes. Whoever gets the job will be able to gain control of a local ‘Slann-gate’ situated on the island and use its power to rule all Albion, probably. All the candidates loathe each other and are seeking to assassinate each other as well as magically control the electorate. Under the Gate and nearby polling station is a monster-ridden dungeon, which may just turn out to be the safest path...

Use your vote responsibly, or die trying!

Hmm, it's almost as though there's a political subtext to this campaign, isn't it?

I'm taking the opportunity to start work on a new unit for McDeath: Arka Zargul and his miners at Dungal Hill. In the McDeath campaign pack, there Arka Zargul is accompanied by 9 miners. So I'm about half way there - still need to collect more.

Three of the sculpts are by the Perrys; Arka himself (from the Norse Range) 2 of the Dwarf Engineers sculpted by Alan and Michael Perry. I've chosen to paint one of them up as carrying a bunch of sticks of dynamite (counts as grenades?). In fact, this sculpt says "Candlemaker" on his tab, so I presume what he's actually carrying are a pile of candles; however the 1991 catalogue lists him as "Dynamite", so I think this interpretation is fair game! 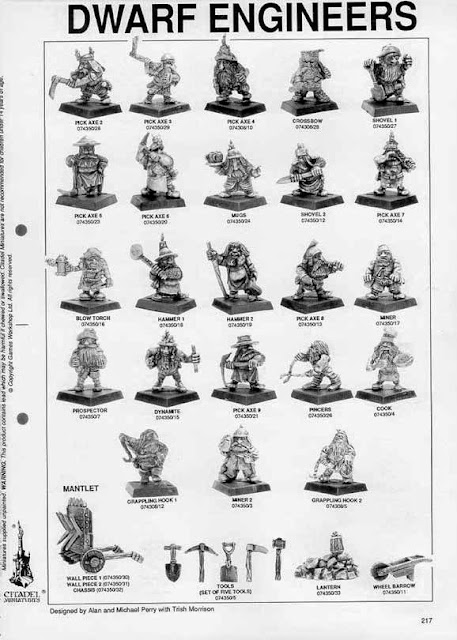 Of the other two sculpts, one is a Kev Adams Heartbreaker Dwarf Miner, now availble from Ral Partha Europe; and the other ("Comrade Digger") is a converted Marauder Troll Slayer, sculpted by Aly and Trish Morrison. I actually got this in an already-converted state from a certain notorious ebay seller, after he accepted a low-ball "best offer".

So who will they be supporting on Beacon Island? Well, their Union has already been pivotal in ensuring that Sir Edward Hatband saw off the rival claims of his brother to win the candidacy; but whether they'll continue to see him as the best candidate to represent the interests of the workers in the long run is anybody's guess...
Posted by robotforaday at 15:54 2 comments: