The Dolgans prepare to raid

Beyond the World's Edge Mountains lies the endless steppe. A vast expanse, so vast that they say it reaches to the mysterious kingdoms of the east, and perhaps even beyond. Though the steppe is fertile, who would dare wander there, freezing in the winter, scorching in the summer? Who could navigate across thousands of miles of featureless terrain? Yet for the Dolgan tribes, this is not featureless land. They know each route, they revere each hill and valley. Their paths are passed on down the generations, spoken by the storytellers, whose stories are themselves a form of magic. 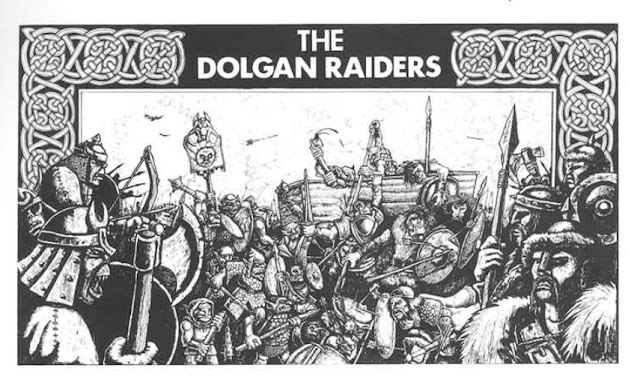 This post is mostly laying down a marker, announcing that I've made a proper start to my project to paint up a Dolgan Warparty for the Dolgan Raiders scenario from the Autumn 85 Citadel Journal. The plan is to play this scenario with Thantsants at this year's Bring Out Your Lead, plague permitting. He, being a talented and efficient bastard, and having had the benefit of several years' head start, has already completed his Hobgoblin army, and a wonderful sight it is to behold. It will be a privilege to slaughter it and nick his caravans. I, on the other hand, had not yet got started, but was anxious to avoid another last minute painting nightmare.

The first thing, of course, has been to gather the models. Unlike later scenario packs, there are very few 'dedicated' models' for this scenario. Quendil has posted pictures of what exactly was sent out as part of the army deal in the Autumn 85 Citadel Journal - by and large, a broad selection from the C01 fighter range, without a particularly clear sense of 'flavour' for the army. So there's certainly no need to slavishly adhere to collecting the set. Instead, my goal was to try and go for an easy-to-collect army, with limited need for ebay auction trauma. As a result, the fast majority of the force will involve in production miniatures, with most of the core troops built from the Fireforge Steppe Warriors box (I've built the archers pretty much straight out of the box - I might do a bit of mixing and matching for the fighters to give them a bit of a distinctive look). I have gathered together some of the old Citadel miniatures with a suitably Mongolian Warrior look, plus the Centaur from Talisman, to act as characters. I think this blend will work well - though there has been one problem, which is that the Firgeforge minis are a bit tall compared to the citadel lead if you leave the integral bases on. So I need to cut the integral bases off each one of them in order to glue their feet directly to the standard-issue Warhammer 20mm square base. It's a bit of extra faff, but once you do it, the heights look fine.

Here's a photo of some of the goodies I'm painting up. I'm strongly committed to the idea of "Oldhammer Now!" and using whatever cool minis you can get your hands on rather than having to use a specific cast from 1985 or whatever, and I hope that this project shows how playing these old scenarios is possible without breaking the bank. I'll introduce you to all the minis I've chosen as and when they're painted. Given my own interests, I'm inclined towards a broadly Mongolian look, though the background, illustrations, and names always leave a certain ambiguity with regards to their inspiration, which is fine by me. 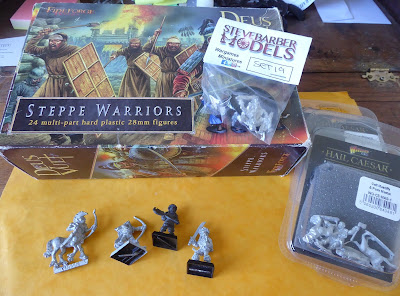 Followers of this blog will know how much I love painting in hotels. However, at the moment I've gone full Alan Partridge and I'm living in a travel tavern, having been sent to mainland Scotland for a couple of weeks of hard graft. Having little else to do in the evenings and weekends, I've been able to make a proper start to this project and hopefully I'll have the full thing done by mid July.

So what of the Dolgan Raiders? I love these margins of the Warhammer world that you can flesh out with your own imagination. Beyond the Autumn 85 Citadel Journal, we don't hear much about the Dolgans. However, they do feature prominently in 1988's installment of WHFRP's The Enemy Within Campaign, Something Rotten in Kislev (and they also feature in 2011's Tamurkhan: Throne of Chaos, but by that point they're just generic parts of the chaos horde, so let's ignore that).

The word "Dolgan" means, in their own language, "The Real People". They are nomadic herders, proud horsemen whose status is measured by the quality of their horses. (Given this emphasis in their background - horses and horsemanship are pretty central - it's somewhat ironic that the Dolgan Raiders scenario only features Dolgan infantry. As this makes them easier to paint, I'm not complaining. However, I will almost certainly add horse archers to my Dolgan Warparty at a later stage.) They move through the steppe with their herds of bison, honouring the gods of sky and hill, and following the stars. Their paths are kept alive by the storytellers; shamans of the tribe whose stories weave magic.

The Dolgan diet consists of bison meat from the herd, cheese made from the milk of the bison in the riders' saddle bags, and foraged grains and root vegetables. In the evenings, they drink beet-liquor around the campfire. The tribe is headed by an elected chief, advised by the elders. 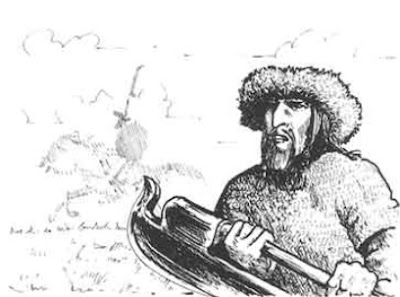 Living in the tough conditions of the steppe requires strength and hardiness, and their culture respects courage and trains the youth to ride and fight. Their weapon of choice is the bow, though they are also capable with sword and spear. Fierce dogs are kept to guard the herd, and in battle these can be used as wardogs.

Though the steppe is vast, the Dolgans find their movements increasingly constrained by the settlers of Kislev on the one side, and by Hobgoblin expansion from the Dark Lands on the other. Perhaps as a result, they greet strangers with suspicion. Nevertheless, they enjoy friendly relations with the centaurs of the steppe. The Dolgans tend any injuries to the Centaur's hooves, which the Centaurs cannot do themselves; in return, the Centaurs act as teachers to the young Dolgan braves.

The Dolgans are skilled raiders, with herd raiding between the tribes once an honoured tradition, an acceptable outlet for tensions between tribes and a test of stealth and cunning. Not everybody, however, has the same respect for this tradition today, which can spill over into outright bloodshed.

(I've tried to include in this blogpost the various illustrations that were produced for the Dolgans. Two are from Something Rotten in Kislev and were drawn by Martin McKenna, and the others are illustrations from the scenario in the Citadel Journal - I have no idea who did these. Does anyone know?) 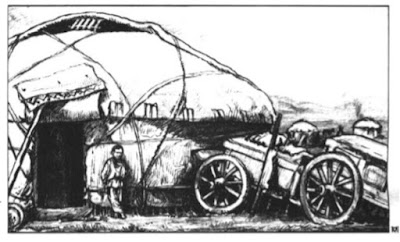