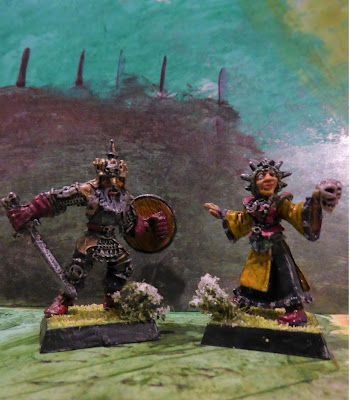 With some trepidation... I've taken the plunge and painted Lord and Lady McDeath. I've had these for a while but was waiting for the 'right time' or some special occasion to paint them. But like the quote from the film Sideways, "The day you open a ’61 Cheval Blanc, that’s the special occasion". So when Jamie Loft's White Dwarf Monthly Painting Challenge asked us to paint something from or inspired by White Dwarf #76, and I found that it was the issue that contained the McDeath 'prequel' Glen Woe, I thought now was the time.

Ok, so readers of this blog have probably heard enough about my hobby psychodramas, but actually I found it was very hard to really enjoy painting what are basically a pair of antiques, because I felt more pressure than usual to 'do them justice'. Has anyone else had this problem? It's probably one of the problems I have with archaeogaming, too much pressure to 'do it right' rather than just to do it your own way. Anyway, they're done now and I'm glad of it.

In the scenario, King Dunco is on his way to visit Lord and Lady McDeath - but he really should have some very strong suspicions about Lord and Lady McDeath's motives based on the fact that their clothing is covered in skulls. Or maybe he just assumes they're goths? Anyway, to keep with that theme I gave the "King hereafter" a shield with a skull - it's one of the plastic Marauder Orc shields, I believe. 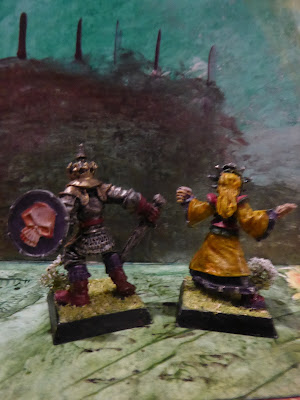