Lord Blowfly among the unquiet dead

A place of the dead. But dry, sterile. His antennae twitched. In the sarcophagus. Not stench, not moisture, not flesh. But magic. A gift for his patron. He raised the axe aloft and struck the tomb, and again, and again, the stonework crumbling. 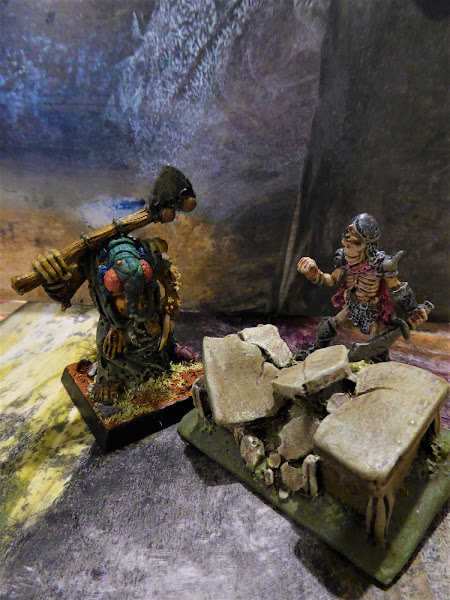 At the moment, my table is full of unfinished/ barely begun painting for Bring Out Your Lead. But in the meantime, a small finished project: another month's entry for Jamie Loft's White Dwarf Monthly Painting Challenge. This month it was WD113, which features among its contents a taster of the Lost and the Damned.

I decided to paint the classic Citadel fly-headed Champion of Nurgle that I've had in my leadpile for a while (a better executed version of which appears on page 70 of that month's White Dwarf). I then placed Lord Blowfly in an encounter from the narrative generator on page 54: "The sarcophagus contains the bones of an undead Champion who immediately rises to engage those who desecrate his tomb." The undead champion is a Fenryll skeleton that came spare with a recent purchase for another project and who I hadn't been intending to paint, but now I'm rather pleased I did. No idea where the shattered sarcophagus comes from, I'm afraid; I inherited it with my father's collection.
Posted by robotforaday at 12:51 8 comments: