IT BEING CHARGED that he misled the poor of these lands with cruel illusions, deceptions, and frauds; FURTHER, that he waged war for the sake of his own vanity; FURTHER, that he plundered lands and left them barren; FURTHER, that he has entered into pacts with foul devils and daemons; be it known that ANTONIUS DE BLARE is wanted in all four corners of this isle, and is to be brought to justice and punished for his evil crimes.


A couple of weekends ago, Warlord Paul gathered together the finest that Albion has to offer - well, those of us with time on our hands anyway - and called us to Slayer Gaming at Mansfield for a 3rd ed scenario. Bridgend Steve, Nik, Ashley, Orlygg, and myself answered the call. (Incidentally, thanks to Orlygg for the vast majority of the pictures used in this battle report) n.b. I'm telling the story here primarily from the perspective of my own warband, with other events to make sense of the action thrown in - there are many other stories that could be told and I hope others write up accounts from their own perspective, but I'll leave the overarching account to Warlord Paul as it's his game.

The premise of the game: there are rumours of vile goings-on at Murdock Keep, said to be harbouring the war criminal Antonius de Blare and the rogue Aleck MacSolomon. A call has gone out to local adventurers to investigate and put a stop to the chaos that threatens to engulf the borderlands of Albion.

Last time we saw these warriors, they were hiding out having made the strategic decision to withdraw from a battle that wasn't quite going their way. Now they need to do something singularly noteworthy to restore their honour and return home with pride intact. Something like bringing De Blare to justice...

They had a choice: they could take the high road, or the low road. And so they found themselves on the high road towards Murdock Keep, along with some snooty peace-loving elves, and a barbarian known as Bryon Anvil who was accompanied by his formidable and somewhat outspoken family. 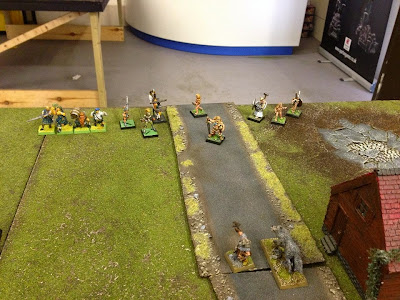 Confronting them on the road was a crossbow armed drow, and a wolf. Turning their attention away from the nagging tones of Bryon Anvil's wife ("well, are you just going to stand there and let him point that thing at us, Bryon? Bryon? Are you listening to me, Bryon?"), the arrant highlanders saw a troll chained to a crumbling pillar. The chaotic milking stool of stools next to the troll revealed the true horror of the creature: this was Malky the Milk Troll, one of De Blare's vile chaotic experimentations. Wee Eck was heard to mutter, "I think I've seen yon udders on page 3 of one of Murdock's pamphlets..." 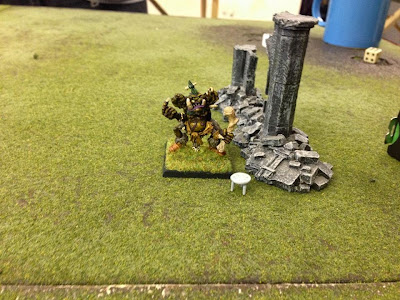 Raising aloft a barrel of Tetli's beer (in spite of the protestations of Preacher Knox), the highlanders offered an unlimited supply of strong ale to the troll in return for its loyal service. Now, loyalty is not typically something at the uppermost of a troll's mind. Nevertheless, the thought of escaping cruel and perverse servitude (not to mention the promise of beer) was persuasion enough for this most simple of creatures. All that was needed was for the warriors of the highlanders to smash the chains with their great weapons... 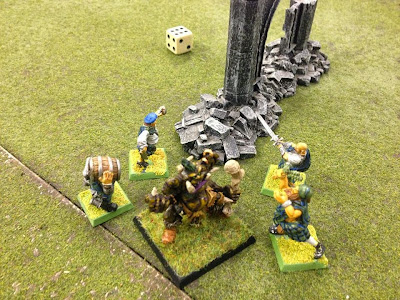 ...which did not go so well. It took several attempts each before the priest finally showed his embarassed looking companions how to break the chain. ("Well I loosened it for you", growled a flushed looking Tetli.) 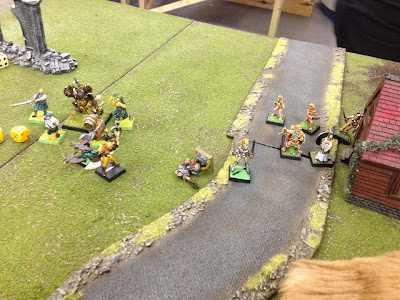 Meanwhile, the pretentious elves had rendered the crossbow weilding drow unconscious, but refused to kill him. "Violence never solved anything", one of them was heard to lisp. Robert the Grim was sorely tempted to continue what the elves had started, with a good old-fashioned disembollocking and a few well-placed boots to the head. However, there were more pressing priorities. Some of Murdocks's hackerz, yelling their warcry of "GOTCHA!", burst out of the shack where the propagandist printing presses were kept. 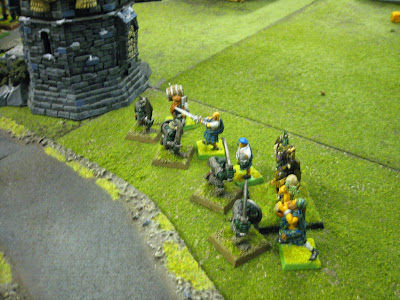 The first batch of hackerz were easily cut down, but Murdock himself and his amoral henchmen the editorz would prove a sterner test.

Trading blow for blow, it was the recruitment of Malky the Milk Troll, driven to hate of the Murdock, the Editorz, and Hackerz by years of exploitation, that gave the highlanders the advantage in spite of Murdock's sneers and smears. Murdock himself found his skull crushed under Robert the Grim's sword. Yet this advantage was not without a price; The Reverend Knox was wounded, and Wee Eck was brought down, caught off guard as he tried to take a sip from his tankard during the fight. "Ach, I'd only come along because I was following yon beer barrel", he groaned as he bled on the floor. 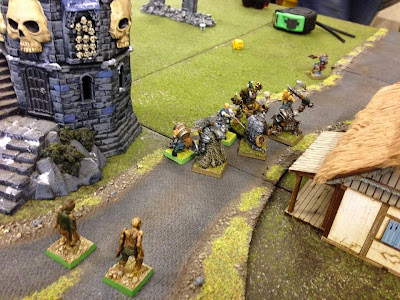 Reverend Knox offered his opinion with a sigh and a shake of the head: "Another victim of the demon drink". He prepared to cast a healing spell on himself, but was left with no time to intone the words before a bolt plunged into his chest.

It had come from the crossbow of the drow, who had now awoken from his unconscious state. Malky the Milk Troll charged over to cut down the perpetrator, though it was too late for Preacher Knox, the second highlander casualty of the action. 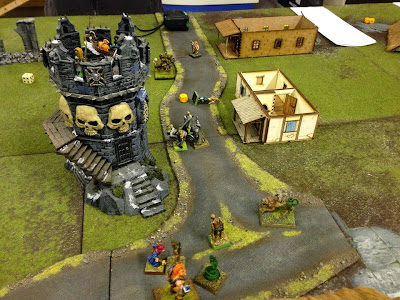 As soon as the last of the Hackerz was out of the way, the highlanders took refuge in the shack where the printing presses were kept, not liking the look of the Chimera proceeding in their direction. Some other adventurers had pretty much the same idea: Lucky Jack the Swift flew in through the window after casting a levitation spell, and was followed by some of his companions taking a more conventional route through the door. 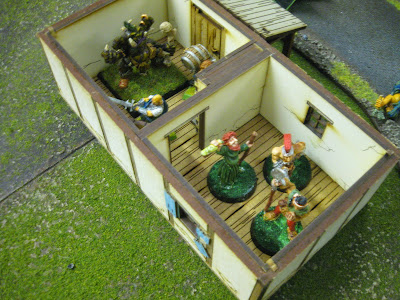 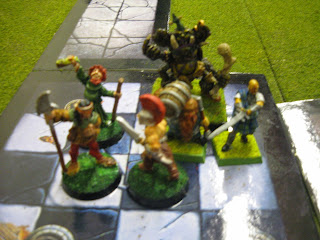 The passageways had an oppressive feel, dank air thick with the screams of those led to their death by De Blare's lies. Around each corner was evidence of his foul experiments, demanding the austere remedy of a thousand cuts. 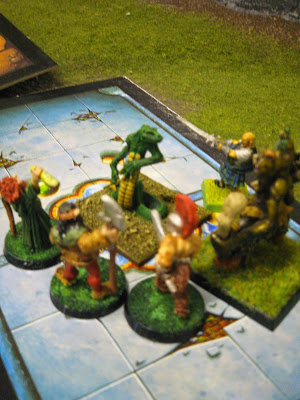 Yet the prancing elves had got to De Blare first! Enchanting him with songs of love and peace, they implored him to leave this place and "have a good long think about what you've done". Placing the illusion in his mind that he was in truth an Envoy of Peace to Araby, they set De Blare free. Would the Elves be complicit in allowing De Blare to escape justice? 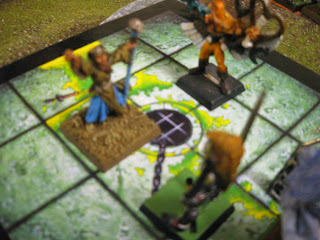 But they had reckoned without Bryon Anvil and his nagging wife. "DO SOMETHING BRYON!" shrieked the missus. 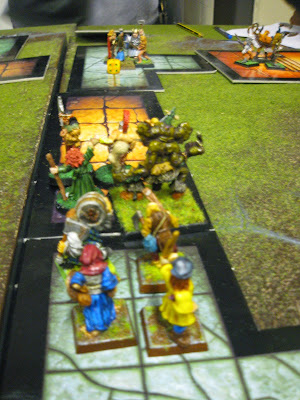 The surviving highlanders, along with the other adventuring parties, charged down the passageway. All around them echoed the sound of a man finally losing his patience:

"WILL... YOU... SHUT... UP! JUST SHUT UP SHUT UP SHUT UP SHUUUT UUP!" yelled Bryon, who had apparently had a long day and could take no more. He took out all the the rage of a henpecked man on De Blare, bludgeoning the wanted war criminal to death. "THERE! I'VE DONE IT! NOW WILL YOU NOW PLEEEEEASE JUST SHUUUUT UP!" 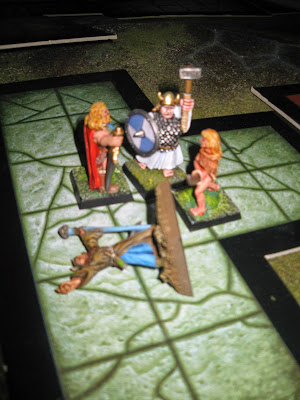 Bryon looked down at the dead body of De Blare. "Who was that anyway?" he asked, while his wife rolled her eyes.
Posted by robotforaday at 04:00