Fantasy wargaming in the 1970s: a look through some issues of Battle magazine

I recently happened upon a cache of Battle magazines from the 1970s - by no means a complete run, but still an interesting spread that give a taste of what the hobby was like in those days. From these vintage pages you can learn about a few things, like a) the apparently overlapping enthusiasm that some wargamers had for military (including Nazi) memorabilia and keeping up to speed on military hardware; and b) the emergence of an obscure subset of wargaming known as fantasy wargaming.

First couple I have - from 1975 and 1976 - are pretty standard wargaming fare. Notes on historical battles, columns from wargaming bigwigs Charles Grant and Tony Bath. Comments on military memorabilia like Goering's dagger thrown in on the presumption that wargamers would also be into that sort of thing. 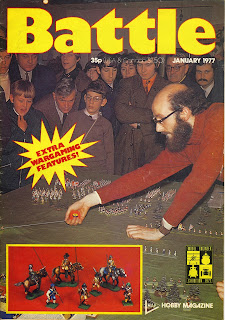 January 1977, and we get this wonderful cover exhibiting what a fascinating spectator sport wargaming can be. Some dapper looking fellas in attendance there. 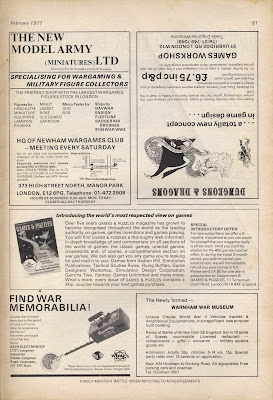 Then in February 1977, stepping ever so quietly around the cover featuring the military decotations of Col. Sir Henry Hollis, we get this advert from an obscure company called Games Workshop about "a totally new concept in game design... Create your own Fantasy Worlds of magic, monsters and treasures". Printed upsidedown. Wonder how that got along?

June 1977 and the disease is spreading. There's an advert for "Fantasy by Minot": "Thane Tostig, the Pagan Giant" on their "quest for the legendary sword 'BLOODDRINKER' that can cut through any known substance, except a Christian Cross". later on we get an article explaining the game that these figures relate to in a charmingly obscure way. 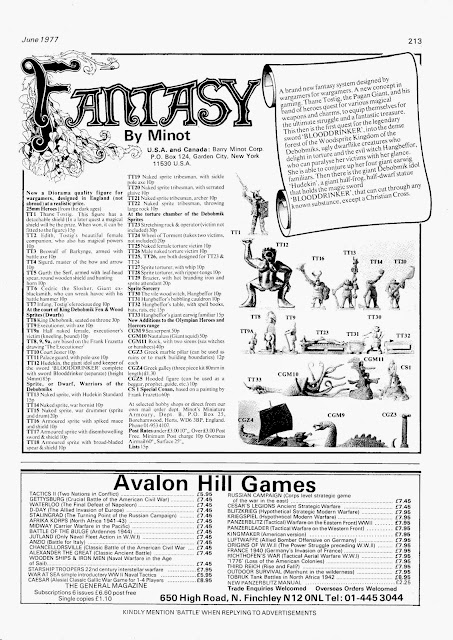 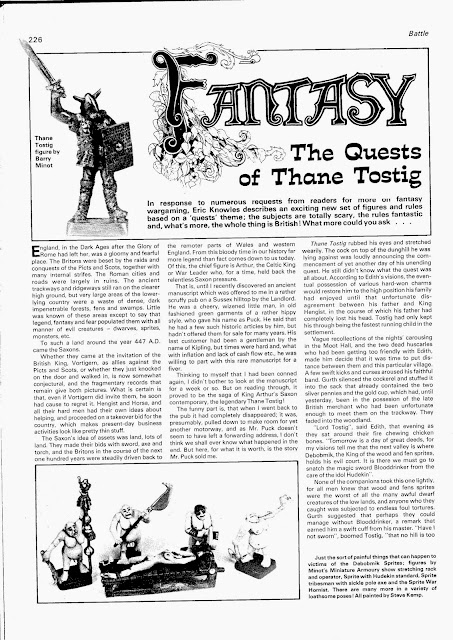 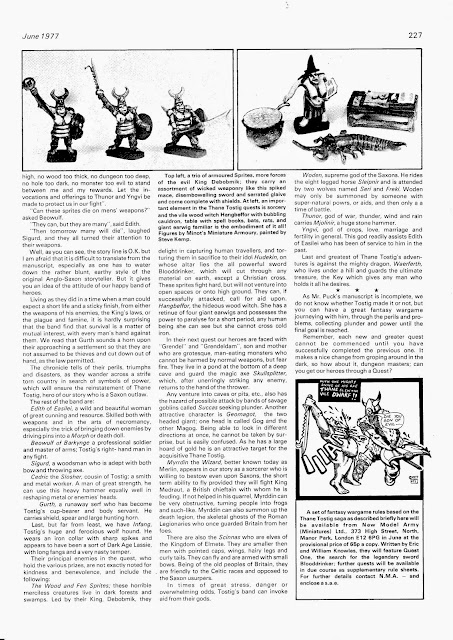 Also there's a minifigs ad with a selection of their hobgoblins. I actually own one of these ugly buggers. 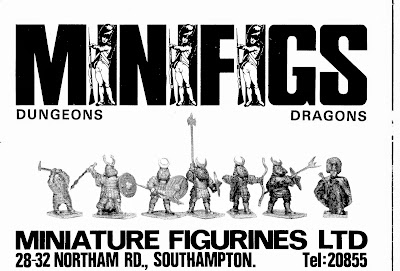 November 1977's entirely historical contents offer some false hope that this whole thing has died down, but clearly it can't have been doing too badly because by December 1977 Games Workshop are able to afford to have an advert printed the right way up. 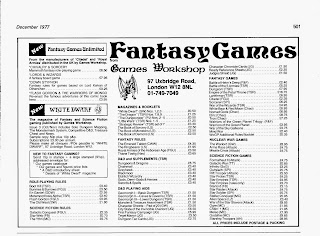 What's more, Steve Jackson has been invited to provide an "Introduction to Fantasy Wargames", in which he reassures us with words like "Many new players have come across the hobby through interests in Science Fiction and Fantasy literature, the Occult, etc." A brief potted history is offered, tracing the interest in fantasy through board games, Tony Bath's Hyboria campaign, minifigs fantasy miniature releases, the Wargames Research Group's "short and rather scanty fantasy supplement" to their ancient rules, through to the explosion of interest that game from D&D. 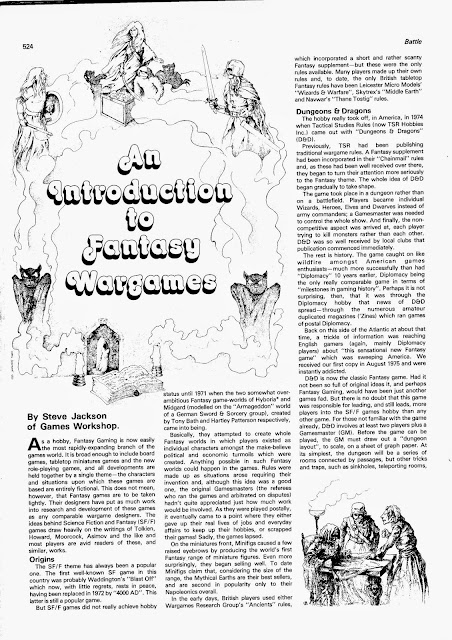 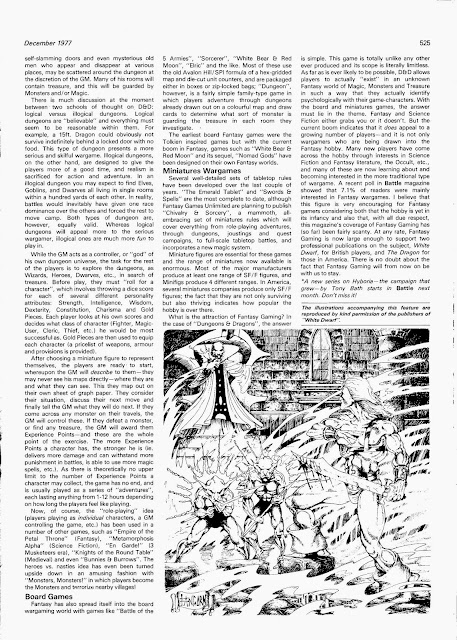 In January 1978, Tony Bath begins a series outlining the history of his Hyboria campaign - the adaptation of Robert Howard's world for "fantasy" battles involving ancient armies maneouvering around a fictional continent. This campaign is widely acknowledged as one of the great ancestors of fantasy wargaming as we now know it, and it's worthy of more consideration on this blog at some stage (especially as I have a copy of Tony Bath's "How to Run a Wargaming Campaign"). Beyond adverts for D&D, however - and a review of D&D Revised Basic Set in March 1978- there's little else in the way of fantasy content. In March 1978, Steve Jackson pens this letter, "Fantasy not a threat", in defence of his beleaguered minority. 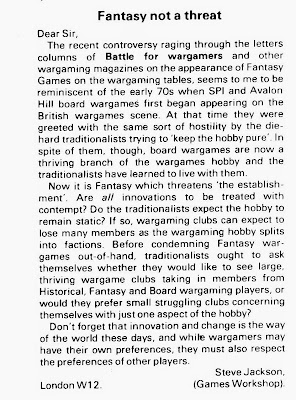 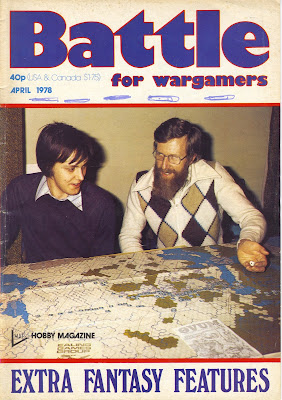 His plea seems to work, with April 1978 plastered with the promise of "EXTRA FANTASY FEATURES". There's a 2 page "Guide to Fantasy Figures" featuring Asgard, Ral Partha, Minifigs, but also others we hear rather less about, such as Barry Minot and Greenwood & Ball. I have to say, I find the sheer range of miniature possibilities on these pages quite exciting - is that just nostalgia for old lead, or is that the effect it would have had on the new fantasy gamer, opening up this world of possibilities? 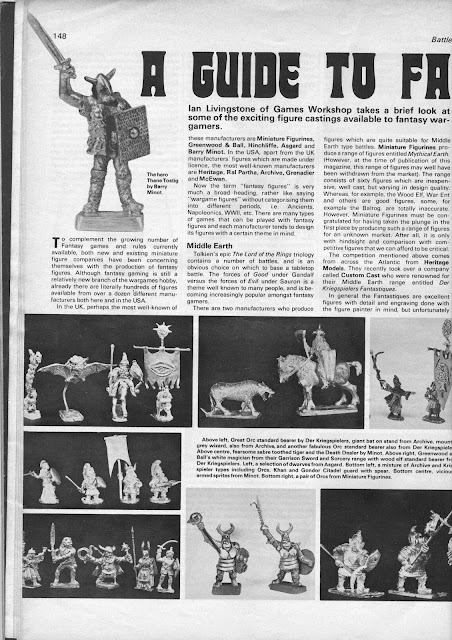 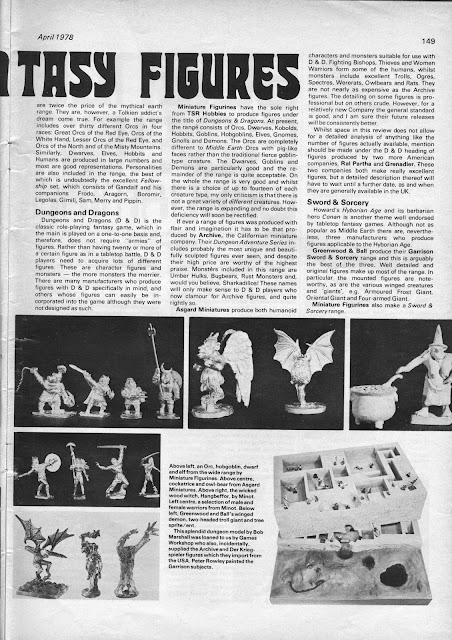 Elsewhere in this issue there's a basic set of Science Fiction rules for spaceship combat by William York; more from Tony Bath on Hyboria; a Games Day review by Ian Livingstone; and an interesting essay from wargames grandee Charles Grant that touches on something of the prehistory of fantasy wargaming. 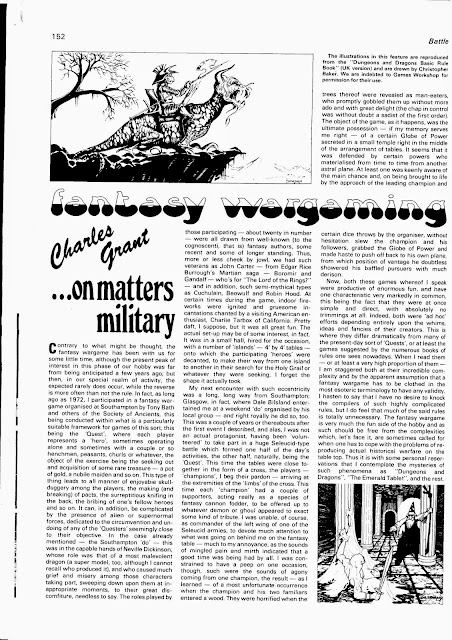 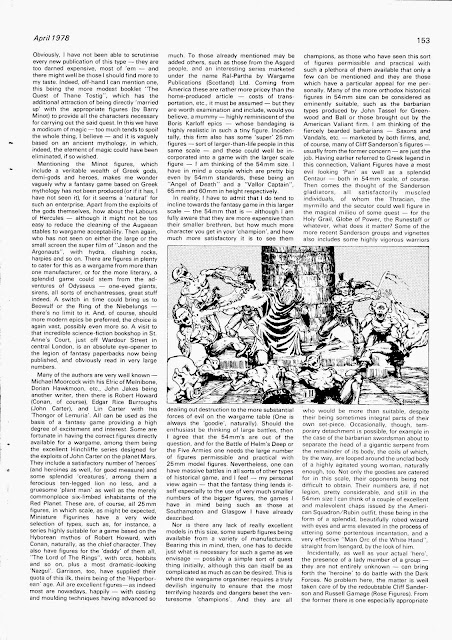 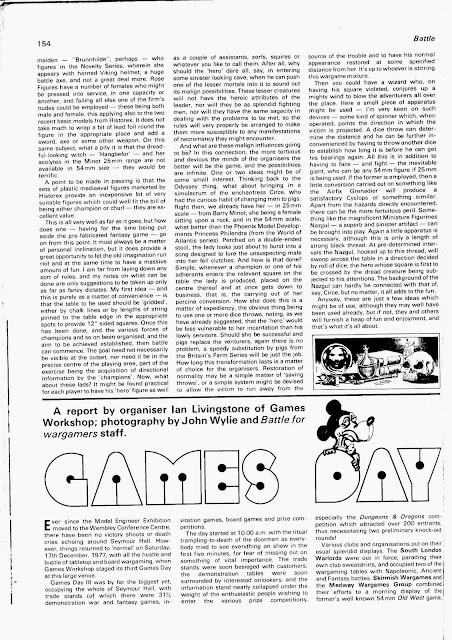 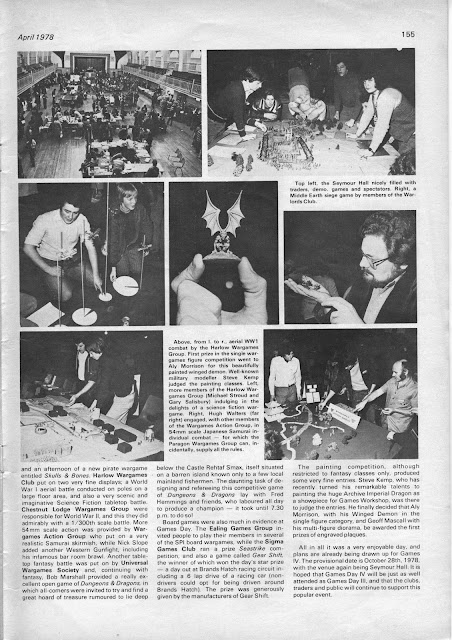 May 1978, and we're pretty much back to business as usual, though Tony Bath's series continues, and there are a couple of interesting adverts and reviews. 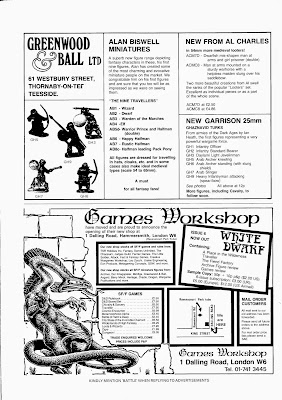 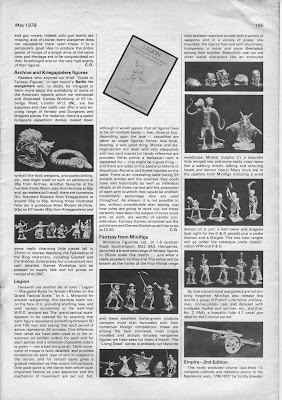 After that, I have no more issues of Battle. I presume the fantasy wargaming fad died out.
Posted by robotforaday at 08:37