There are some days we can never talk about. Days that we would prefer not to remember. And most of the time we do not remember, except when the fragments of recollection cut into our dreams. Never as a complete memory. Just shards and slivers that draw blood but can never be properly pieced together. And then we wake up and try to forget all over again.

As you can see in part one of this battle report, this was a scenario where small bands of adventurers each set out to achieve particular objectives. They players explore the board with their warbands, and there are all kinds of subquests and NPCs to interact with.

These kind of games are great fun to run, and (hopefully) great fun to play. However, they're a bugger to write up, because so much is going on at the same time. Not to mention the fact that I don't have a camera of my own, so I never have a complete photographic record and I can only make do with what other people upload! As a result this is a somewhat experimental battle report. It only scratches the surface of what was going on - I hope that Steve Beales will have an opportunity to blog about some of the wonderful subquests which he added as co-GM. Instead, rather than trying to give a complete account of events, I'm going to offer a series of glimpses into the fog of war, which will (hopefully) piece together to offer a glimpse of just some of the mysteries that were laid bare on that fateful day in Thingwall.

Oh yes, and while we still have two more days of it left... HAPPY GNOMEVEMBER! 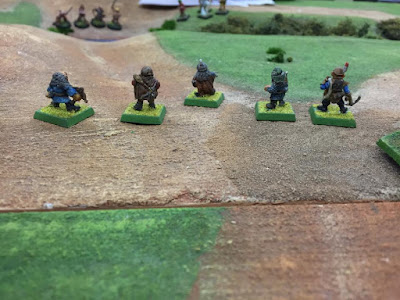 The guards of the village of Thingwall peered down into the valley and watched as what appeared to be a band of barbarians from the northern wastes forded the river. "They're not wearing that many clothes, are they?" muttered the sargeant.
"I don't like the look of those lot one little bit."

"Sir, you don't suppose they've come to see the Duchess, do you?"

"I wouldn't have thought they were her type."

"No, sir, I mean to help investigate what's been going on in the mines. The Duchess is offering some kind of reward."

"EXCUSE ME SIRS", yelled the most hairy of the Barbarians, "BUT WE WERE WONDERING IF THERE WAS A GROCERS IN THE VILLAGE? WE WISH TO PURCHASE SOME SUPPLIES FOR SOUP."

Unfortunately, his gutteral tones proved completely incomprensible to the guards. (A double six when rolling against intelligence to see whether they could make themselves understood.) "It sounded like they were threatening us," declared the Sargeant. "We had better fire some warning shots."

This did not end well for the guards. 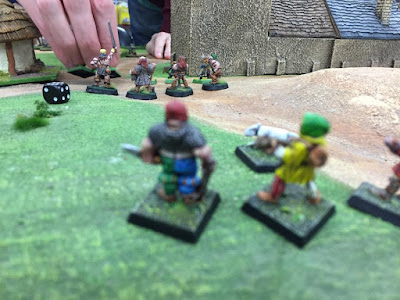 An inauspicious start. The rest of the villagers decided that that if the Barbarians wanted to come shopping, they were more than welcome to do so. 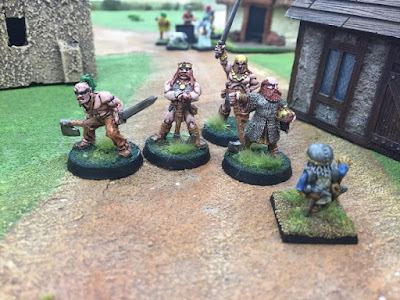 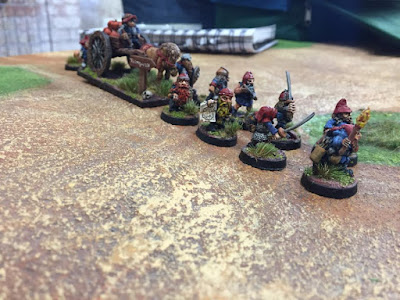 His mood does not improve as the village come into sight. "What a shithole, eh boys?"

Just at that moment, some kind of scarecrow shambles into the path of the delivery cart. 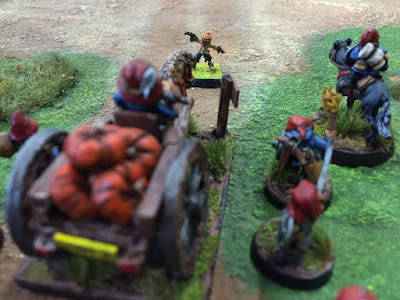 "Is this some kind of sick joke?" growls Mr Pebbleton

"I am acting chairman of the Thingwall Pumpkin Liberationary Front, and I must insist that you free my brothers and sisters who are at this very moment languishing in captivity in the back of your..." 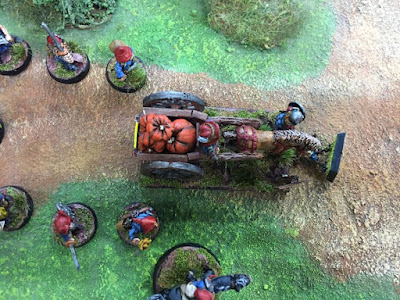 The sentence is left unfinished as the delivery cart runs the creature down, only for his body to explode into a cloud of blood sucking bats. "What manner of foul magic is this?" shouts Pebbleton as his band of deliverymen hack at the creatures swarming around them. 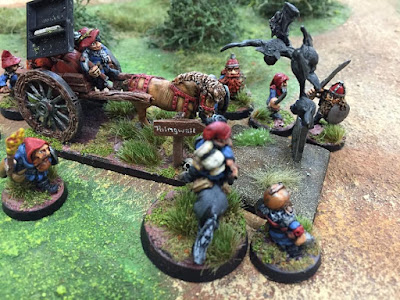 The bats finally dispatched, and the pumpkins unharmed, the delivery company makes its way towards the town square past. Unfortunately, young Fib Pebbleton cannot resist making a rude remark about the Old Mage of Thingwall, standing guard at that moment at the village's famed circle of mushrooms. "Dad, dad, do you smell that? Do you smell wee? Ewwwwwwwwwwww it's that old gnome there! That old gnome smells of wee!" 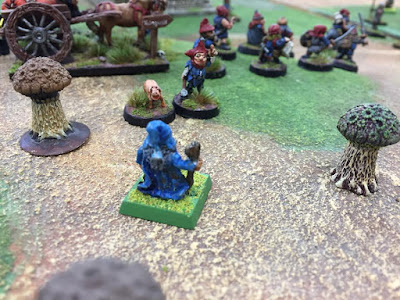 "What did you say, you little runt?"

"Don't talk to me like that, you nonce! Dad, dad, that stinky gnome there's a nonce!" Fib's pet pig Benedict squealed and grunted what sounded like an insult of his own.

The old mage of Thingwall, having never felt so insulted in all his life, decided to teach them a lesson they wouldn't forget, turning the boy into a demonic creature and his pet pig into a fish-pig. 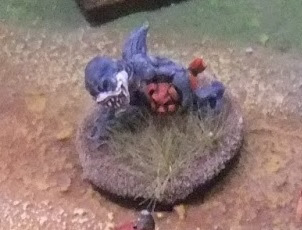 "Oi, you!" yelled Mr Pebbleton, "turn them back or there'll be trouble!"

And trouble there was, as the crowd of gnomes put the boot into the head of the venerable old mage, until suddenly he vanished. Assuming him to be dead, the delivery folk thought no more about it and continued on their merry way to the village. 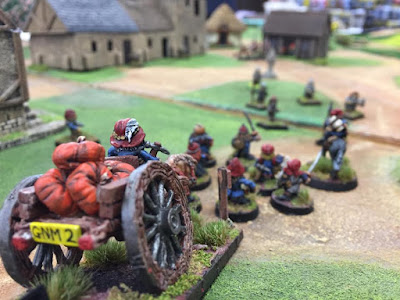 Entering the main square, they find themselves conronted by a giant snake. "Don't worry, I'll deal with this!" screamed Micky 'Madsack' titch, waving his sack (containing a cannonball) about his head in a deranged "fanatical" style. It didn't end well for the snake, the innocent bystanders, or indeed Micky himself.

After all this, they reached the Duchess.

Want do you want us to do with these pumpkins?

Noting the somewhat diminished number of gnomes left to consume the pumpkins at the halloween feast, and further noting that this was in large part the fault of those delivering aforementioned pumpkins she suggested (strongly hinting that she might leave negative feedback at the trading post) that the Gnomish Pumpkin Delivery Co. leave the pumpkins and get the hell out of her village by the quickest route.

Which they did. "Not like they need help with that monster coming out of the hill or those skeletons heading towards the village or anything like that, is it? Idiots" muttered Mr Pebbleton darkly, before pondering how he was going to explain to his wife their son's strange metamorphosis. 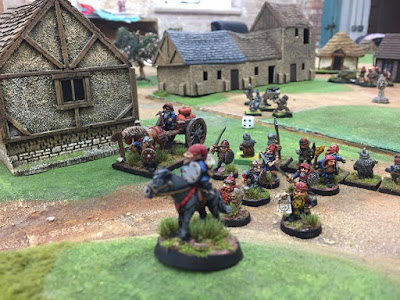 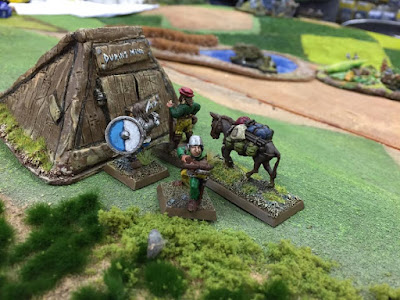 "Shut the fuck up", responded Sylvester.

Smashing their way through the barred door, they climb into the mine tunnels, having to duck down low within the gnome-hewed tunnels.

They fight off giant scorpions 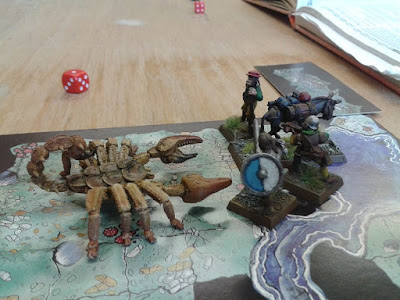 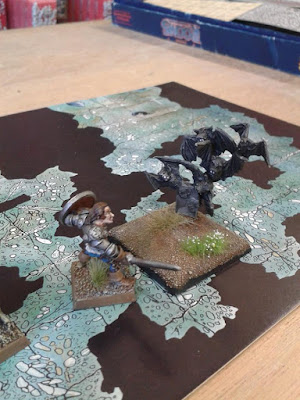 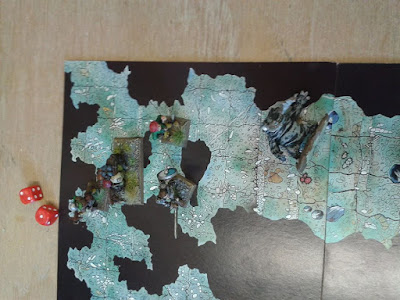 Rewarded by the discovery of treasure which they take as "advance payment", they are nevertheless unnerved by the grinding sound which grows louder and louder as they move deeper into the dark claustrophobic tunnels. 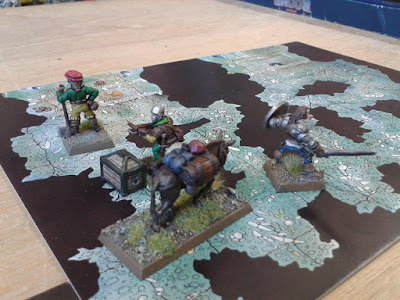 Until they come face to face with... what is this creature? Arms hanging down, cutting jaws, some kind of demonic insect? 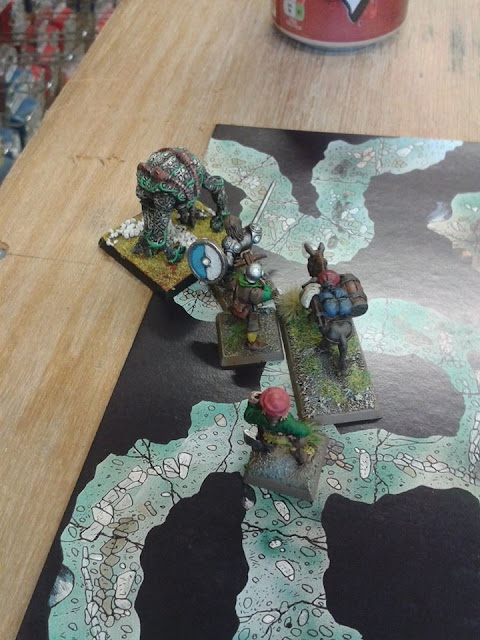 A long way from home, tired and enranged, the creature hisses as the blows of the adventurers rain down on his body... and then suddenly and without warning cuts his way through the rock and out to the surface...

Descending on the village, the creature begins to make short work of the henchmen of Jeremiah O. Lygg, who were already caught up in slow moving conflict with a giant snail. 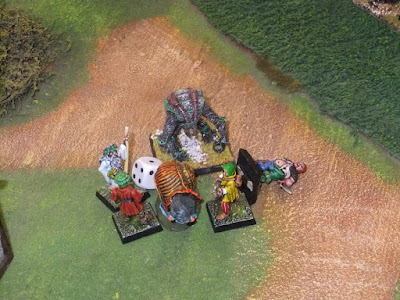 Climbing out through the tunnel cut by the creature, Gonzales, Sylvester, and Pepe look on in horror, unable to comprehend what they have just encountered... 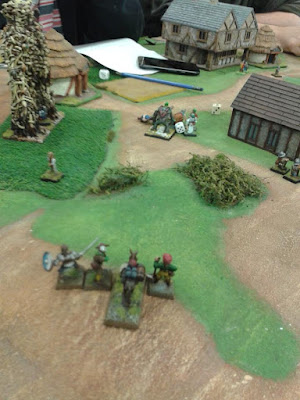 Chapter 4 (kindly provdided by Ashley Rogers!)
To your Highness,
I'm writing to report on your recent request to ask the Dogs of Law to intervene in the trouble in your village. I have heard reports of the insect-like beast that arose monstrously in your village possessed of the spirit of an evil magic caster.

Although we did not intervene in that battle I wanted to assure you of another attack by an evil warlock we delayed who was looking to invade with his undead minions. A group of loathsome followers of a bestial god were identified at a distance by the tats on their butt cheeks. 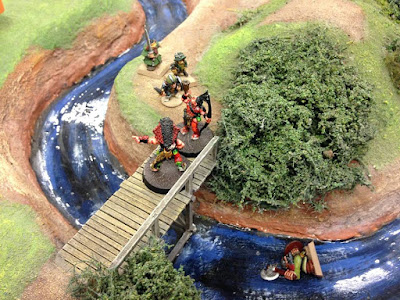 We fought and killed two of their number but my bodyguard was pushed into the river and although rescued was then slain later when we engaged them in battle again with their warlock accomplice and his undead. 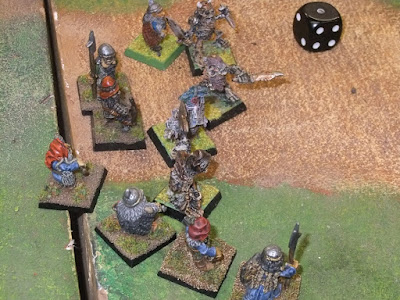 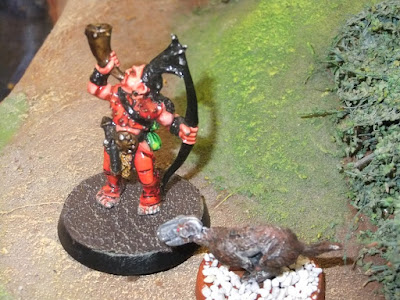 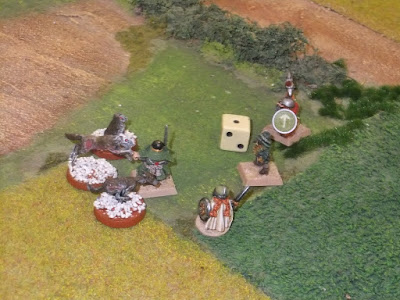 We fought until sundown and exhaustion but have not heard of him again since so we think he must be now too weak to return his attack soon.

Should you need our help again I have left you a magic lantern in which to cast our sign in the sky.

Solkan be with you,