To celebrate St Patrick's day, I thought I'd go straight for the stereotypes, and dug out the Talisman Leprechaun from the shoebox where he's been stored recently. 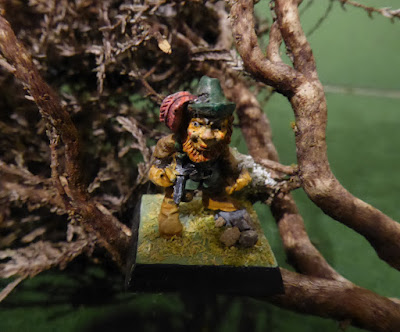 In fact, he forms part of what is almost certainly my favourite little warband, painted for a game at the Foundry back in 2017.

W.B. Yeats described Leprechauns and their kind as "sluttish, slouching, jeering, mischievous phantoms" (probably meaning sluttish in the earlier sense of slovenly, unless there's a side to them that I hadn't realised). Rather than the usual sword-swinging hero, I thought it would be fun to summon a warband of fairies and creatures of the woods, fighting mostly with their wits and frustrating their opponents with mischief.

Painting him in the sterotypical green (rather than going for a red jacket as per Yeats' account), I dubbed my leprechaun hero "the Bold Thady Quill" after one of my favourite Cork folk songs, and played him as an Illusionist. He's backed up with some slightly more thuggish (if still diminutive) myconids from Hasslefree. Hasslefree also sent me a "tooth fairy" miniature as a free gift and I thought that would work very nicely as a companion. Finally, rounding the group out, a sprite from the Wood Elf Glade Guard plastic sprues.

One spring morning, The Bold Thady Quill and his companions set out to teach the one-eyed warlord Bungus Ness a lesson. Why? Because Bungus Ness (in fact, a Fimir painted by Orlygg) couldn't take a joke. And there's nothing worse than someone who can't take a joke. Bungus Ness terrorised the nearby villagers with his annual demand that they provide him with a bride. One year, tricked into receiving a pig slathered in make up in place of one of the daughters of the valley, Bungus Ness could not see the funny side and set out on a path of destruction.

While battle raged, The Bold Thady Quill sneaked. (This, and the other two photos of the game, are by Tom Reynolds.) 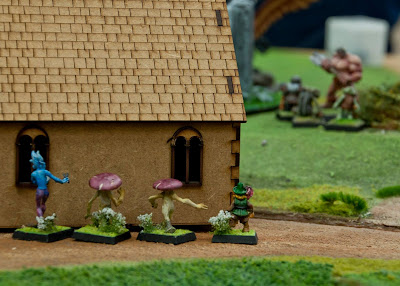 Rather than fight Bungus Ness' henchmen, he misdirected them with illusory buildings and terrified them with visions of terrifying undead creatures. (The model here is a Kelpie from Oakbound.) 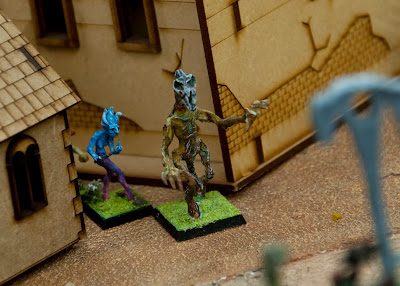 Bungus Ness himself was tormented by the buzzing of the sprite, distracting him so that he was unprepared for the final attack. 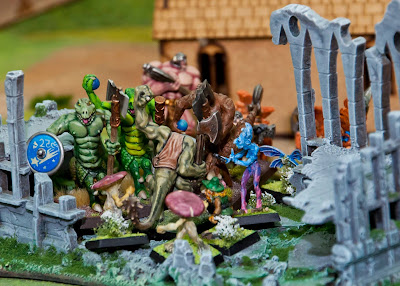 With Bungus Ness gone, the villagefolk could throw off the shackles of their oppressor once and for all.

To all in Little Albion who can't take a joke: beware!
Posted by robotforaday at 16:10

Email ThisBlogThis!Share to TwitterShare to FacebookShare to Pinterest
Labels: Adventures in Albion, Leprechaun, The Bold Thady Quill and his companions