A tribute to the creators of White Dwarf

Continuing on the theme of "catch up" blogposts, I realised there was a neat little project that I never got around to putting on here.

As you may recall, I'd been taking part in the White Dwarf Monthly Painting Challenge initiated by Jamie Loft - each month, a classic issue of White Dwarf was selected, and our challenge was to paint something contained within, or inspired by, its pages. Alas, Jamie's become the victim of his own success, with the growth of Old School Miniatures over lockdown leaving him with not enough time, so the challenge seems to have died. However, I feel like this was a suitable note to end on! 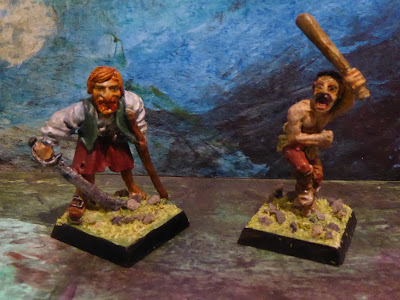 White Dwarf 90 contained a celebratory retrospective by Steve Jackson and Ian Livingstone, looking back on the origins of the magazine and of Games Workshop. Well, what better theme for a White Dwarf painting challenge than to paint up the founding editors of White Dwarf?

Pirate Steve Jackson (aka "the Ruffler" from the C04 thieves - although this casting is from Foundry's re-release) was a sculpt apparently inspired by Steve turning up to the 1984 Citadel Open Day on crutches due to a broken ankle.

Ian Livingstone is apparently a big fan of baseball and so his likeness for the White Dwarf Personalities box set ("Livingstone, the 'ed hitter") is wielding a baseball bat - but the pose itself is inspired by his cameo appearance in the artwork for his Fighting Fantasy classic Deathtrap Dungeon; wonderful artwork by Iain McCaig with a figure based on Livingstone chained up and recoiling in horror. 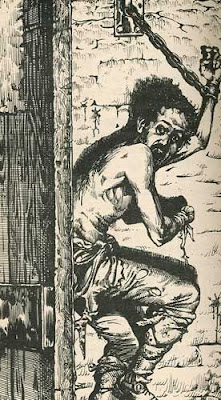