The month of Marsh has been and gone - a Fimir Demonomaniac

We have just passed through the month of Marsh - the time to celebrate those proud one-eyed warriors of the fens, the Fimir. Now, every year I start painting some fimir during Marsh, only for things to remain unfinished on my dask at the end of the month. This year was no exception - but I can now present the horror that has arisen among Clan Slea. This Demonomaniac comes from Krakon Games and is sculpted by Ross Whitehorn. It comes with a choice of heads, and I chose the double-headed variant just to enhance its mutated feel. 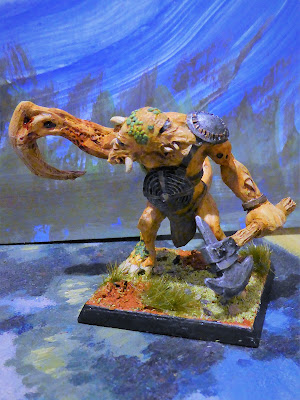 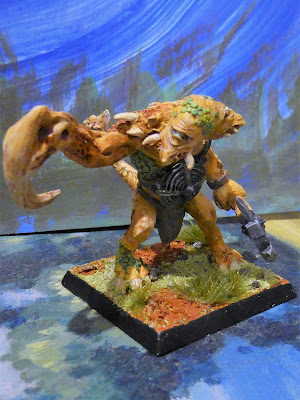 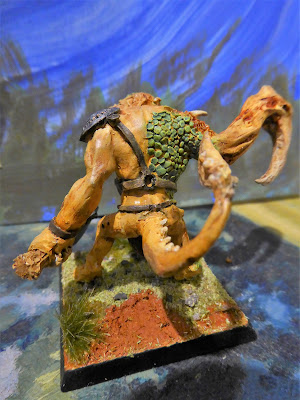 Demonomaniacs are introduced in the 1995 Warhammer Fantasy Roleplay adventure Dying of the Light, set around Marienburg. The result of the ritual experiments of a Meargh who seeks to bind demons into her warriors, demonomanics are an unstable horrors: the body of a fimir struggling - and generally failing - to control the demon that has possessed it. In Chapter 5, the party first find the mangled and mutated corpse of a Fimir who has failed in this struggle and been ripped apart by an "an extreme series of mutations". Then, deeper in the swamp they find another thing that "looks like it was once a fimir", towering and in a state of apparent confusion. (My favourite detail is in its profile, the alignment is given as "Too confused for that at the moment"). "Claw marks cover its whole body and worms now ooze from these fetid gashes." It emits gutteral noises of agony. It flails its axe and mutated scythe-claw arm in a state of wild attack. 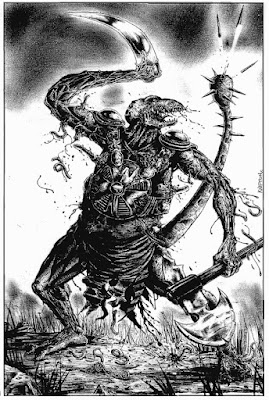 Here is Pete Knifton's atmospheric, terrifying, and frankly disgusting image of a Demonomaniac. As you'll see, I haven't included worms with mine. I do regret not giving mine a tail that can shoot spikes. Anyway, I imagine the one I've painted to be in a slightly more stable state of possession - though only just.

This is not the only fimir I managed to get belatedly done for the month of Marsh, but I'll save the others for the next post.
Posted by robotforaday at 14:28