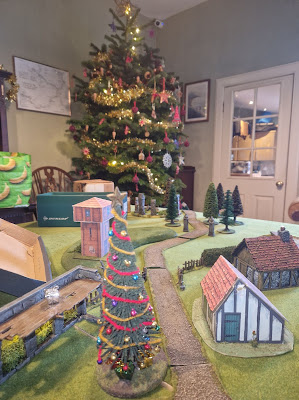 What day is it today, child? Ahhh, well you might ask, for the darkness of winter seems endless now. There are few left who remember that this time of the year was once an occasion for joy and celebration. Gather by the fire and I will tell you the story of the unspeakable terror that stole Christmas. Is there no wood left for the fire? Alas, I'm afraid we'll have to burn another of your toys, child.

A couple of weeks ago, I had the most wonderful privilege of being hosted at the house of Paul Ede for a seasonal mini-campaign of Warhammer Fantasy Battle (5th ed) devised by Steve Han. As the only one of the three to have a blog (or so I believe), I was tasked with taking the wonderful photos the other two had taken, together with Steve's narrative, and adding my own commentary to leave a battle report online for posterity. All credit to my co-conspirators for most of the narrative and the photos here; I just played and enjoyed the wonderful hospitality! I lined up with a "nice" list (predominantly Empire), while Paul and Steve ganged up on me with a "naughty" list (predominantly Orcs and Goblins).

The background:
Chaos sorcerer, Sanity Claus, has been trying to rid the world of joy for centuries, but he has ever been thwarted by the magic of the spirits of Christmas. Direct assaults on the spirits have failed, forcing him to devise a more subtle plan. Sanity Claus has been warping reality to slowly shift Christmas forwards in time. The shift is reaching a critical moment as the citizens of the Old World unwittingly respond to and reinforce the warp by putting up decorations and playing Christmas songs ever earlier. The time is right for him to hurl Christmas to a time before the arrival of the Old Ones and so remove the protection of the spirits of Christmas. With the magic of the spirits gone, he will be free to bend the Old World to his will.

Scenario one: The spirit of Christmas past - The invention of Christmas Dinner
A chef working in a small halfling village is about to invent pigs in blankets, bringing untold joy for all Christmases afterwards. Sanity Claus has dispatched the Ghost of Christmas Past to prevent this.

Farmer Caleb Peerybingle went to tend his flock of geese and caught sight of the advancing force. He rushed back to let the village know. They despatched their fastest goat rider to let the duke know whilst the local militia assembled. 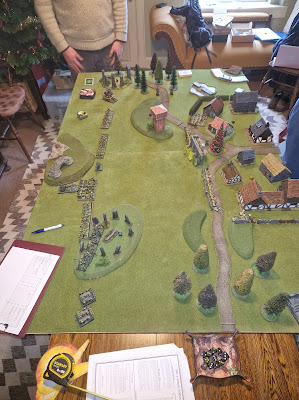 In this first battle, a combined force of halflings and gnomes seek to defend their village, their seasonal gifts - and, above all, the kitchen where the chef is working on a very special festive recipe. 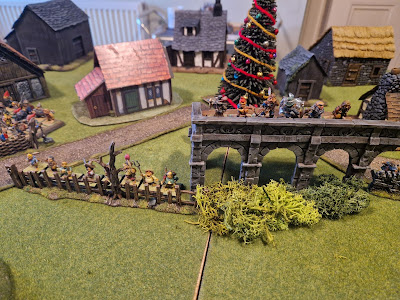 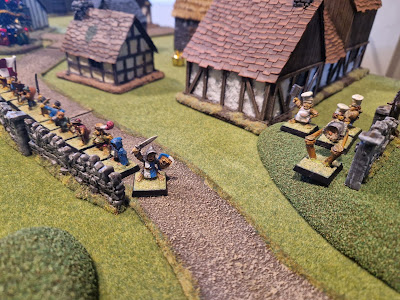 They look out to see the raiding force that seeks to prevent this culinary achievement from ever taking place; the Ghost of Christmas Past has gathered and Orc and Goblin mob whose idea of a festive dinner is to pull halflings limb from limb like Christmas crackers before feasting on their innards. 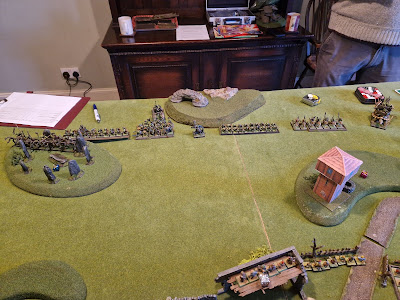 While the combined arrows and bolts of the village defenders do a remarkable job of stalling the core of the attack - sending wolf riders fleeing and causing many greenskins to fall before they reached the village wall - the spider riders and pump wagons on the flank pose a more robust threat, relatively unperturbed by the cauldrons of stew raining down from the hotpot catapult. 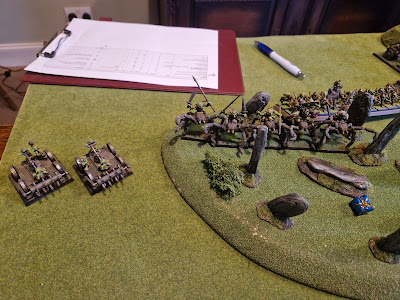 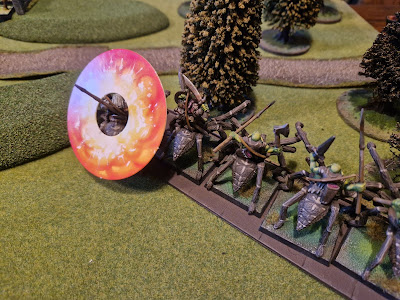 Over on the other flank, a War Tortoise smashed into a unit of gnomes that had sallied forth - as the gnomes broke, the war tortoise followed up, only to crash against the village wall, upending itself and destroying the crew. 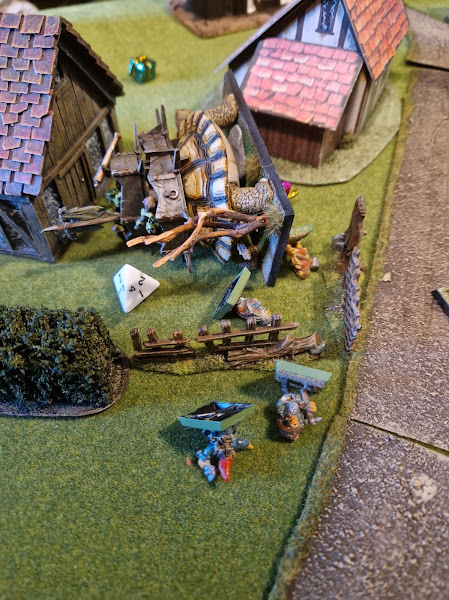 The line of defence was holding, but for how long? Seeing the impending threat, the mayor bravely rushed out to intercept a pump wagon before it reached the villagers... 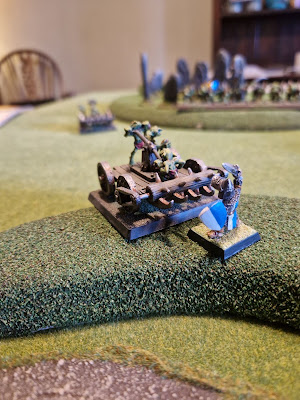 ...only to be charged by the goblin general in his chariot. 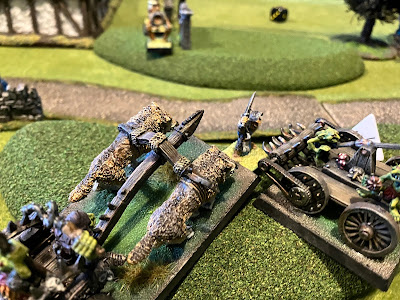 Still, the hafling archers in the village bravely defend behind the wall and hold their line. But can they hold much longer? Wait? What's that sound? A trumpet announces the approach of the Duke and his entourage! Reinforcements at last! Surely now the village and its kitchen are saved? 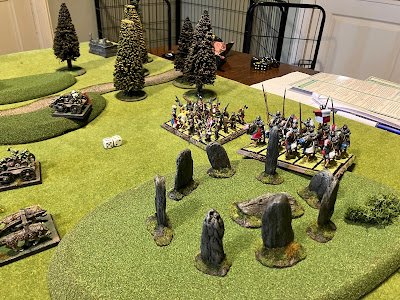 The pump wagon crashes into the flank of the halberdiers, causing them to flee... then, as the pump wagon pursues the fleeing rabble, it crashes straight into the Empire heavy cavalry... who also flee! 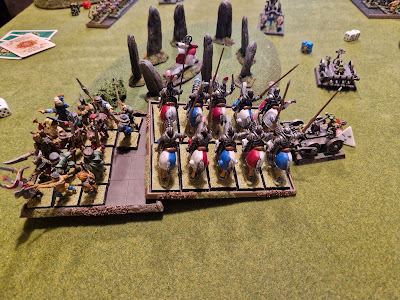 The halflings curse as they see the reinforcements flee... "Bloody useless lumbering big idiots... we were doing alright on our own... all they had to do was show up. Honestly..." With the Duke flattened by a pump wagon, the hotpot eaten by spiders and the last defenders surrounded, it's all over. There will be no pigs in blankets.

The surviving Halflings try to rescue as many gifts as possible in the hope of salvaging Christmas. 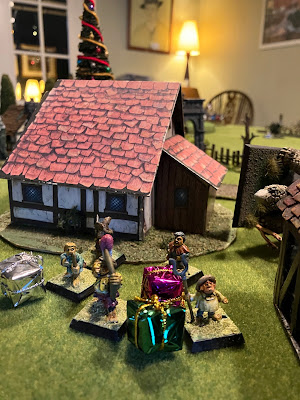 Scenario two: The Battle for Christmas Yet to Come
Sanity Claus seeks to destroy the great Yule Tree at the heart of Tannenbaum. He is joined by the deathly Spirit of Christmas Yet to Come. The brave defenders of the traditions of the season are joined by the true hope that can save Christmas - jolly old Santa Claus himself with a sackful of presents for good boys and girls and a sack full of pain for Sanity Claus and his evil henchmen.

Santa Claus and Sanity Claus face off in the great battle of naughty versus nice. 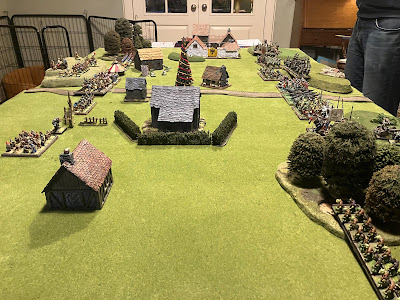 The defenders of Christmas approach the battle with a strategy of delaying Sanity Claus' approach to Tannenbaum, with the hope of holding back the attacking forces long enough to take up a position defending the tree.
With this in mind the Satyrs take up a scouting position to bravely sacrifice themselves holding back the giant while the battle line advanced.

This plan did not go well... the Satyrs fled, the Giant's persual robbing the hapless Imperial Knights of their chance to charge. 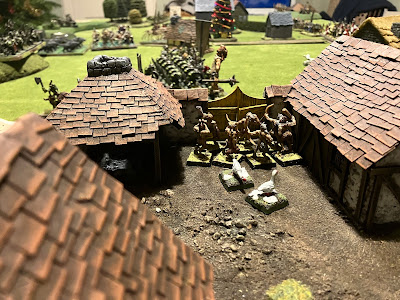 More effective is the effect of a Magical Blizzard cast by Santa Claus, which has the effect of holding back the Ghost of Christmas Yet to Come back while the swordsmen, wardancers, and steamtank advanced into the heart of the town. 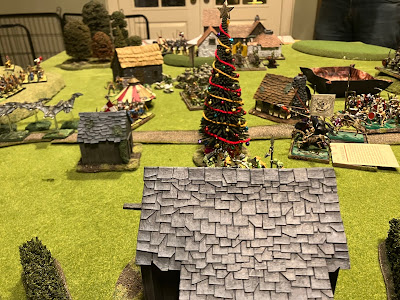 Yet a malign influence swinging in from the eastern flank... a swarm of vampire bats causing chaos in the ranks of the defenders of Christmas, causing Santa, the Duke, and their accompanying unit to retreat. 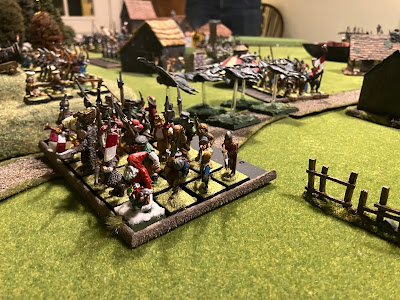 Still, with the steamtank ploughing through as the Swordsmen held the Wight Knights, the forces of light seemed to have at least some cause for hope. 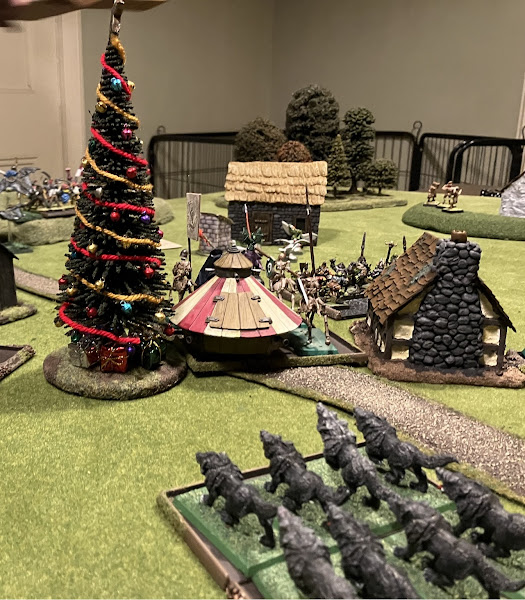 Not least as the Orcs seemed to be in some disarray. The Old Big'Uns flee, get fired on by their animosity failing allies before decided to rejoin the fight. "Ere boss, dat wos a taktikal wivdrawal, but we just couldn't seem to get it togevva until de arrer Boyz stuck Hodgrod, Booger and Bollox in dere arses and we sharpened up quik smart!" 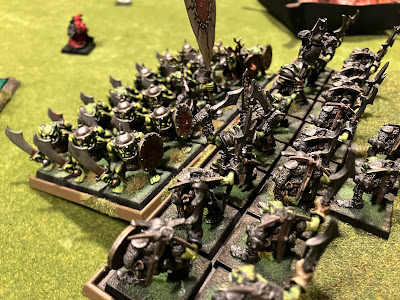 Yet it was the Vampire Bats who did most to influence the course of the battle. Defeating the Elven archers who had bravely charged to stop the bats reaching the Empire artillery, the resulting panic led ultimately to Santa Claus and his bodyguard - who had only just rallied - fleeing once again, this time away from the battlefield. 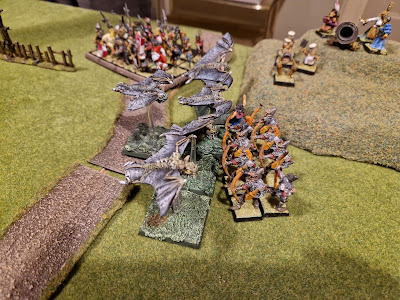 So the Battle for Christmas Yet To Come was lost. Sanity Claus had seized control of the season.

And yet hope is not lost forever, surely... while Santa Claus lives, Christmas might still be saved - if only some still survive to remember and believe. One day he will return to bring good cheer, the tidings of the season, and the gift we all hope to find under the Yule Tree; the blood of our enemies. 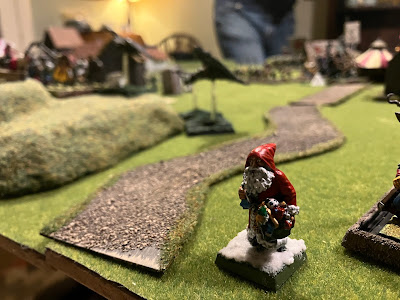