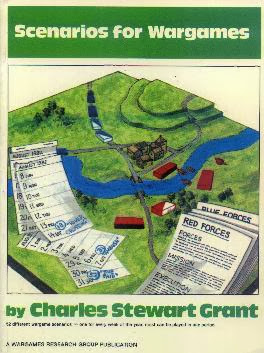 One of my ambitions getting back into wargaming was to leave behind the memories of grinding scissor/paper/stone type pitched battles and to really embrace scenario-driven play. I accept there's a place for pitched battles - I just think that when they are the rule rather than the exception, they end up squeezing any sense of meaning or fun out of your wargaming; it's just line 'em up and knock 'em down. Well, I ended up bored with that approach to play anyway, hence my drifting away from the hobby (that and the complete lack of money to buy minis). So when I got into the oldhammer scene, I was eager to banish the memory of monotony with some really exciting objective-driven play. (The battle reports I've put up here, I think, demonstrate that I have indeed found what I seek!)

For this reason, I'm always fishing for inspiration for future scenarios. Enter this fine volume, recently dug out from my dad's collection. What Charles Stewart Grant sets out to provide are 52 different scenarios - one for each week of the year, should you feel so inclined. Given such an aim, I think the exciting variety in his ideas is commendable; you don't get any sense of his inspiration running dry, and even though some are "variations on a theme" (e.g. different kinds of ambush, different coastal raids), each seems to provide a distinct challenge. 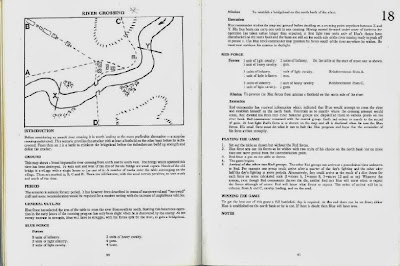 Each scenario is clearly presented in the following format: first you get a map of the battlefield with deployment zones indicated. After a brief introduction, the ground of the battle is described, there's a bit of context as to where the armies fit in and what they're trying to do, and then there is a suggestion for the composition of the forces of both sides. There's a section on how to play the scenario, describing how to start, and any special rules involved. Finally, there's a section entitled "winning the game", which explains the victory conditions for both sides (and often, each side has very distinct victory conditions).

The intended audience for the book is clearly the historical wargamer. With some exceptions (e.g. "helicopter attack") the author aims to be as general as possible, so that the scenario can be translated to any historical period. For this reason, the book is easily usable by the fantasy wargamer; and even those scenarios that seem to imply a certain historical specificity (e.g. the hijacking of a train on a railway) could easily be adapted (in this case, just shifting it to the hijacking of a wagon train). Most scenarios involve 2 armies ('red' and 'blue') although some involve a 3rd force ('green') - angry locals, for example, or mercenaries of questionable loyalty.

While the book talks in terms of stand alone games, I could see it being very useful for anybody running a narrative campaign; say you've just finished one battle with a particular outcome. What comes next? A rear guard action? Well, the book has several examples of how to proceed. Also many of the scenarios focus on the challenge presented by the terrain of particular battlefields; so let's say you're running a map based campaign and two armies meet in marshland - well, there's a scenario here for that. 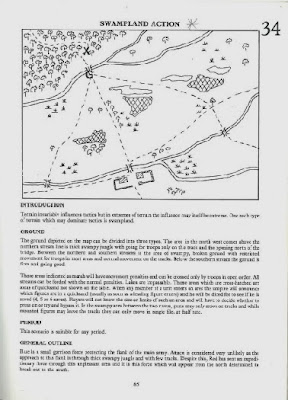 One thing that may be of interest to oldhammer gamers is that the book absolutely envisages the need for a GM. Often the battlefield the players see before them on the table is not what it seems; or one player is given different knowledge of the field of play than the other. For this reason, many (if not all) of the scenarios simply wouldn't work without a GM, and all the others would certainly run much more smoothly with someone to think through how the rules apply to the particular circumstances of the challenges the armies face. In fact, I think it's a wonderful demonstration of just how much value a GM adds to gaming, because it shows you the exciting things that can happen if players are not presented with the same information about the battlefield, or if the GM can institute special and unexpected rules in the heart of the battle. There's something about elements of the game being unknown to the players that makes for good fun.

All in all, an absolute treasure trove of great ideas. Exactly what the oldhammer gamer needs. The only problem is that it's long out of print, and it only seems to come up on amazon and ebay for very silly prices. That being said, if you do see a second hand copy going cheap, grab it!
Posted by robotforaday at 12:43