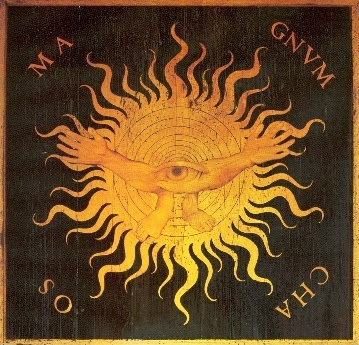 So the next OGRE (Oldhammer Gamers, Region: East Anglia) meeting is being planned for the end of January and looks like it'll involve some Realm of Chaos warband action. Ok, confession time: not only have I never collected Chaos, I've never actually had much of a desire to collect a Chaos army. Why is that? Well, ironically, I think that a lot of Chaos armies are just too orderly. During the 90s, when I started playing, Chaos basically involved a very predictable lineup of pretty homogenous and boring looking chaos warriors, or if the player was being really exotic, some demons painted red. They just lacked soul - which, I suppose, is befitting for an army of the damned. But still, didn't excite me. Blood for the blood god? Not today, thank you.

Ok, fast forward to the present day, we get to oldhammer, which means rewinding further into the past (err, yes, I think that makes sense...) - and suddenly chaos starts looking actually chaotic. First off, you've got a real selection of characterful and exciting toy soldiers to play with. Beastmen that aren't just the same wildebeast-goatmen-type things, but actually every creature under the sun rising up against humanity like a kind of twisted episode of Animals of Farthing Wood. Thugs just beginning their descent into chaos. Chaos marauders and warriors each with their own particular deformities. All shapes and sizes. (Ok, mostly big and chunky sizes, but still, not a regimented and homogenous army of orderly boredom. Actually a force of chaos.)

Secondly, and even more excitingly, the way the books "Slaves to Darkness" and "The Lost and the Damned" are structured really puts chaos - or at least, chance - at the centre of proceedings. Unlike "Warhammer Armies" books, these are not just boring rosters, by which I mean they are not a place for the omniscient and omnipotent general to compose the bestest all conquering army list. Rather, they do something far more exciting, which is they make the composition of warbands subject to the whim of a roll of the dice. The end result: a raggle-taggle group of chancers on a road to near certain death, to the amusement of their god. Now that's an image of chaos that I can believe in.

So lets give this a go. I'm following the guidelines Orlygg gave for setting up warbands prior to the Oldhammer weekend. I'm really starting from scratch in putting this warband together, I don't have a particular set of models I'm trying to work around. Thus I don't really mind what I end up with, so I might as well do this properly and put everything in the hands of random generation. Out come the dice. Yes, the rest of this blog post really is going to be me rolling dice, so you might want to scroll down to the bottom to see the conclusion! 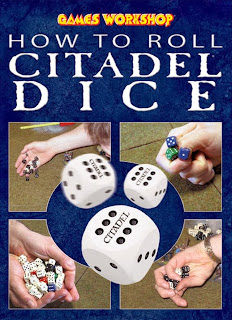 Step 1: Species Ok, first, I roll a D100 to find out the species of the champion: 35 = Chaos Dwarf Hmm, never painted dwarves before. Ah well, there's a first time for everything.

Step 2: Starting attribute Now I roll another D100 to establish his level for the starting profile: 80 = Dwarf Level 10 Wizard

Step 3: First chaos attribute
Now I find out what weird deformity my valiant champion... er I mean bitter and twisted little bugger of a wizard has. Apparently for this I need a D1000. Wow, that's a hell of a big dice. I get out another D10. 904 = Tentacles

So a dwarf wizard with tentacles. Slight panic as I think what a major piece of conversion work that's going to be. Luckily, a quick google search makes me aware that chaos dwarf with tentacles is a model that was actually made. Hmm, quite a cool model too. Warming to this now.

Step 4: Generate your retinue
Right, now's the time to find out what bunch of unlikely lads have somehow been drawn in by the charisma of an angry dwarf with tentacles. I follow Orlygg's guideline: "If your character is level 10 roll 3 times". Let's see what this comes up with.

34 = 2D4 Chaos Dwarves
Well yeah, makes sense, a chaos dwarf would meet some other chaos dwarves in a pub, they'd get pissed and they'd go out looking for a punch-up. I roll the 2D4 to see how many, and get 6.

54 = 2D6 Humans I roll the 2D6 and once again get 6. Apparently these can be chaos cultists... I have to look into that to see whether I want to go down that line. Apparently it would involve rolling for more chaos attributes (each chaos cultist has D6-4 attributes). Wait, more dice rolling?!? Why didn't you say so!
The dice come out 6, 5, 6, 1, 1, 3. Which means that two of the cultists have 2 attributes and one has 1 attribute. The rest have none.
Back to the personal attributes table. I get the following:
040: Beaked; 519: Irrational Fear; 490: Hunchback; 199: Blood Rage; 731: Prehensile Tail.


Phew. All done. Sooooo, to sum up, my warband will consist of
- A Chaos Dwarf Level 10 Wizard with tentacles
- A Chaos Warrior
- 6 Chaos Dwarves
- 6 Human chaos cultists, one of whom is beaked and has an irrational fear, one of whom is a hunchback, and one of whom possesses blood rage and a monkey's tail.

Time to collect some models and start thinking about some background! Watch this space for all that. Oh yes, and before I forget, the image at the top of this post is from at the Basilica of St Mary Major in Rome. Liked it a lot.
Posted by robotforaday at 14:01