Battle Report: A Dwarf With No Beer

"There's nothing so tragic, so sad or so drear
Than the pathetic sight of a dwarf with no beer..." - Ancient Gnomish ballad

(Being the report of a 3rd edition scenario of my devising fought at the Scythe and Teacup in Liverpool, featuring VanLoon's dwarves and my gnomes, as well as some of my other minis)

It's time to toast the dwarven new year. A cartload of ale for the festival was due to arrive at the dwarf settlement two days ago. Now the townsfolk are growing anxious that the new year's festivities will be dry: a terrible omen for the year ahead. Suspicions inevitably fall on the gnomish village half a day to the south. A militia has been dispatched to investigate. Will they find the beer and save the new year? 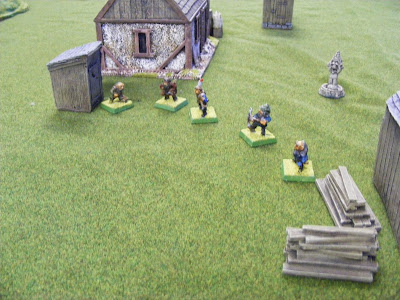 Gnorman let the door of the latrine swing shut behind him. "I'd leave it for half an hour if I were you..." The guards to the Gnomish village of Thingwall weren't listening. They'd just caught sight of something even more disturbing - a gang of dwarves appearing from beyond the hills, and these dwarves seemed to be in a foul mood. 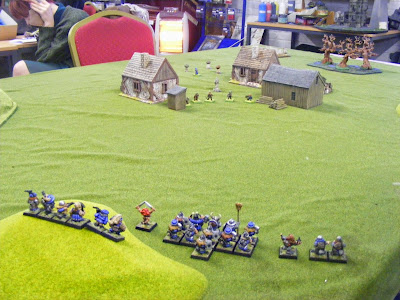 "We best go and warn the others..." The guards sound the alarm, and the Duchess emerges with her companions of honour. Seeing Gnorman, she asks him for a report of the situation:
"I hear word of warning. What is the situation?"
"Well yes ma'am, like I said, I'd give it a while before heading in there"
"No, no, I mean..."

Her words were rudely interrupted as a wild eyed red haired pot bellied maniac of a dwarf ran ahead of the rest of his kind, screaming something that sounded like "GIVEUZBACKOURBEERYOUBASTARDS". 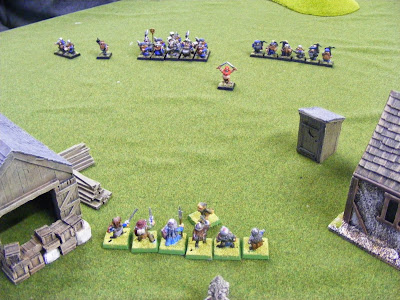 "What on earth is that dwarf saying?" Luckily, the Duchess was a trained diplomat and shrieked towards the advancing mob: "Now listen here you... erm... you little people, you have no business here. Return to your hovels at once. We have our new year's celebrations to prepare, and a fresh batch of beer to imbibe..."

This was too much for the wild haired dwarf beserker (known to his kin as Lorek Deathfast) to take, and, spying a stack of barrels he charged towards one of the gnomes standing nearby, cutting him down instantly. 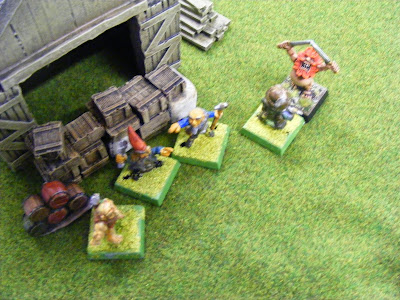 The village was in danger of becoming a bloodbath. The gnomish jester leaps forward to try and break the tension with a joke. "So, a halfling, a dwarf, and a gnome walk into a bar..." 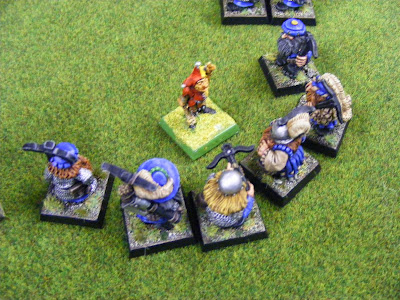 Somehow, it works: the dwarf crossbowmen shoulder their weapons and watch the act in bewilderment. Meanwhile the Dwarf Captain Garrick Craghammer negotiates with the Gnomish Duchess. Eventually they come to an agreement: the dwarves can search any part of the village except the warehouse. Garrick Craghammer makes a show of accepting these conditions; all the while, however, dwarf sappers led by Uther 'Bomber' Arris are edging their way around the back of the warehouse trying to find a way in.

While the sappers try and pick the lock of the sidedoor to the warehouse, Bomber Arris bounds forward and cracks open one of the barrels to see what's inside. A foamy liquid pours forth.

"IT'S THE BEER!" roared the beserker Deathfist, charging into combat once again, this time only to be cut down. 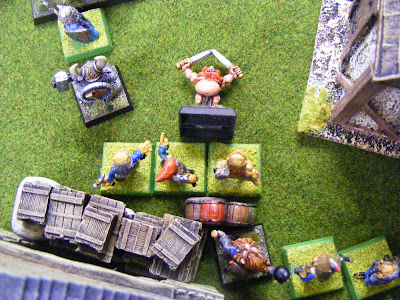 But had he jumped to entirely the wrong conclusion? Bomber Arris' face twisted into a picture of pure disgust as he realised, all too late, that this was no dwarven beer, but a weak gnomish brew. But the damage was done: the gnomish crossbowmen shoot dead the sappers trying to force the lock to the warehouse, and the Jester's attempts to cool things once again proved a miserable failure.

"Errr, have you heard the one about the dwarf, the gnome, and the halfling?"
"Don't you know any other jokes, gnome?" growled one of the dwarf crossbowmen, before despatching the jester with a bolt to the chest.

The chugging of an engine was followed by a crash, as a Gnomish tank burst through the crates blockading the entrance to the warehouse, and then by a loud explosion as the steam cannon mounted at the front of the tank ripped a hole through the ranks of the dwarven warriors and crossbowmen. 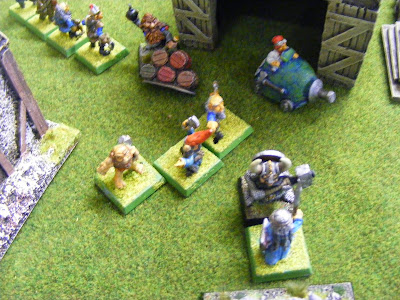 Hostilities had now well and truly commenced. The gnomish and dwarven warriors clashed, the Dutchess' Dog Fido bounded forward at the crossbowmen, and Garrick Craghammer tried to bring his hammer down on the Dutchess' head while Bomber Arris tossed a badly aimed grenade into the mix: the blast took life from both sides. 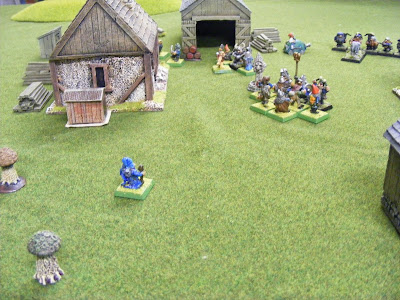 The battle raged on, the numbers of dead growing on each side, when a Gnome Wizard who had been standing and silently guarding the village's mushroom patch in advance of the New Year's Rituals, decided it was time to intervene, and cast a spell to paralyse the Dwarf Captain Craghammer - yet the Dutchess declined to deliver the killing blow:
"Dwarf, you have done enough damage. The dead are already too many. I am holding back my weapon: Why would I do that unless we spoke the truth? You have seen what we were trying to keep secret in our warehouse, and it was not your beer. We do not have what you seek. Begone."

The Dwarf crossbowmen were quick enough to take her advice, fleeing from the slobbering dog Fido. 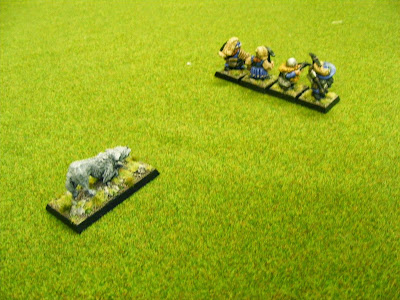 But Craghammer could not bear to fail in his mission. "Then what became of our ale? The brewer should have arrived with his cart two days ago." Further enquiries meet with a crucial piece of information that had been missed in the rush to violence: one of the gnomes had seen a carthorse wandering freely but a day ago in the direction of the woods.

Garrick Craghammer sets off again, with his now severely depleted force; he calls for gnomish volunteers to join him: "Gnomes, before today there has never been trouble between our peoples." Unsurprisingly, very few heed his call, though three do go along at the urging of their Dutchess to maintain the uneasy truce in the hopes that the alliance might be rebuilt. 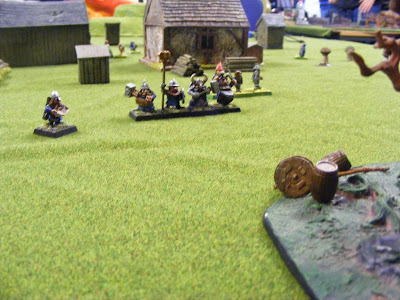 As they approach the woods, they see the upended cart, and two of the barrels of their ale. "But surely there should be more?" 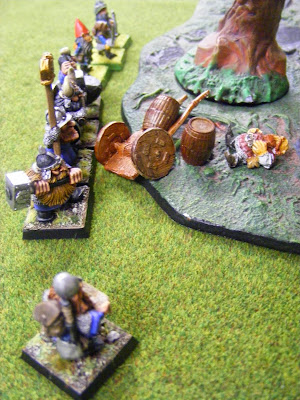 Nearby is the slumped body of the brewer Tetli; alive, but only just.
"Tetli, who has done this to you?" roars Craghammer.
Tetli opens his mouth as if to answer, only to violently vomit over himself instead.

Futher into the woods are the sure signs of a party; including barrels of beer smashed open. There, standing around with flagons of ale, are a band of highlanders from East Albion: mercenaries who, having deserted from a recent battle, were hiding out in the woods to bide their time. 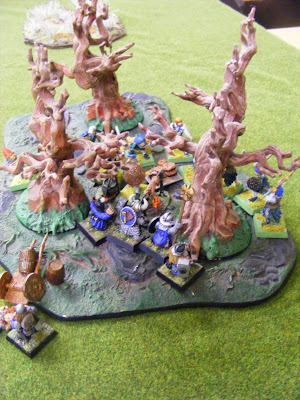 "Give us back our beer. All of it," ordered Craghammer.

"Awa' and bile yer heid ya bawbag, that's our beer. Yon wee fella was only too happy to share it with us. Disnae seem tae be able tae handle it though." The other kilted drunks roared with laughter.

Craghammer had had enough. Many of his own had died, and all because of the drunken antics of an idiot brewer and some men in skirts. Challenging the leader of the band, he found the warrior a match for him even though obviously unbalanced by the strength of the dwarven beer. Both dwarf and man were wounded; until at last the highlander, fatigued, collapsed on the ground. Craghammer raised his hammer high above his head ready to bring it down.

The band of humans readily agreed.

The dwarves set off with their beer. But they left the brewer Tetli, who had caused so much trouble, behind. The festivities had been saved, but at a grave price. There would be fewer dwarves to call in the new year; and the women and the children left behind would pledge bitter vengence. 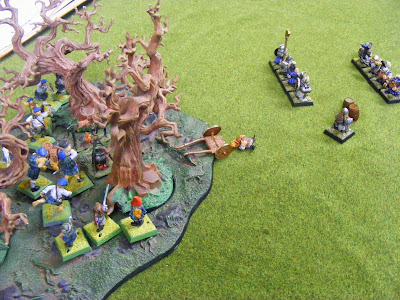 And the moral of the story: don't drink and drive.
Posted by robotforaday at 16:48