Feeling a bit fed up at the moment. Fractured my arm on Friday and so can't really paint. Well, I can, but it's painful and even less precise than usual. But I can type. So I thought I'd take the opportunity to get around to posting about my game-related New Year's Resolutions. Ok, it's late, but most people fail with their resolutions within a few days of the new year, maybe holding off on them for a while like I'm doing increases the likelihood of success?

First, let's see how I got on with last year's goals:

Goal 1: Collect and paint a chaos warband for the OGRE meeting
Errr... well OGRE never got around to having a warbands game, so I have the models for the warband I rolled up, but never painted them up. Ooops. Well, at least OGRE has met up a couple of times, with more meetups in the pipeline, so that's a plus. Just not got round to playing a chaos warbands game!

Goal 2: Paint all of the Heroes for Dungeonquest
Oh dear. Made absolutely no progress on this either. In fact, I was in the process of painting the ninja, Tori Jima, to include in a game of Ronin with Whiskey Priest and the OGRE lot. But the aforementioned buggering up of my arm has put paid to that, for now anyway.

Goal 3: Collect a force for Doctor Who: Invasion Earth, and take on Thantsants and his wonderful Doctor Who collection 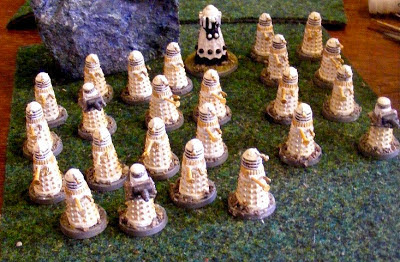 Finally! Something I actually accomplished! I got this done and played a wonderful mini-campaign up at his place in the lake district last Easter. Great times. Never did put a battle report up of these 3 games (arrgh, failure in the midst of success), though the reports for 2 of the 3 scenarios are over at Thantsants' blog: War of the Daleks, and One of our Dictators is missing... - but looks like we're missing the Grand Finale. Well, I have the notes and the photos, one day, maybe...

Goal 4: Make Clan Slea a force to be reckoned with 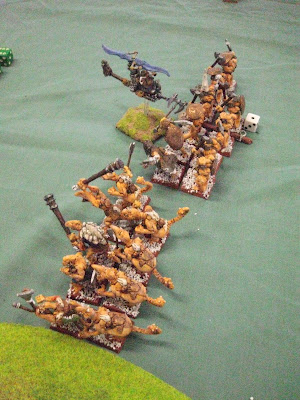 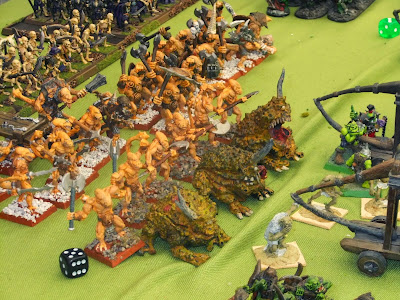 Plenty of work done here. Lots of new fimm infantry and even some artillery pieces. They've been in some great fights at The Poison River and The Siege of Avalone (at Bring Out Your Lead 2014). They're not finished (is any army truly finished?) - for a start, I still have to paint up several of the Nick Bibby fimir - but they're still a pretty impressive lot. However, there was one thing Clan Slea never got around to...

Goal 5: Fight Warlord Paul in a sequel to "Trouble at Nobridge"
It's now over a year since this very fun game at Blog-Con, which left so many loose threads crying out for a sequel. But I've never got around to organising it. I do have a suitable miniature for the captured Elf Elementalist, however, so I haven't given up hope entirely!

Goal 6: Collect more McDeath miniatures
Not doing too badly on this. I have the Monster of Loch Lorm, and 6 of the character models. In terms of painting, I've painted up the monster and a unit of suitable clansmen (the citadel models along with Warlord and other minis), and they're growing into a nice characterful warband in their own right. 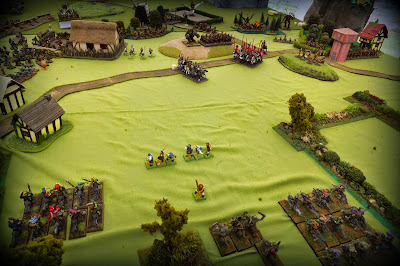 See the fella tossing his caber there? 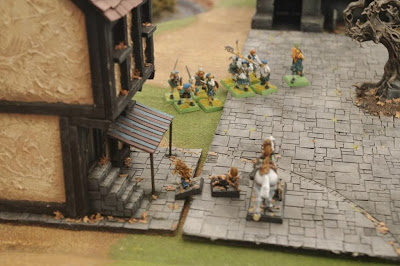 I'm not abandoning this task for the next year - I'll pick minis up when I can find them - but prices are getting stupid on ebay, so I'm not going to make it such a priority that I bankrupt myself.

Goal 7: Attend the Oldhammer Weekend
And what a weekend it was! 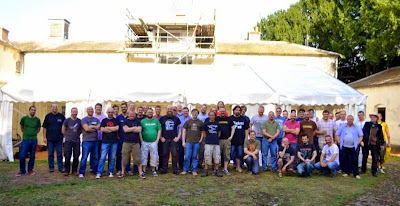 Ok, so having evaluated the past year's successes and failures, what are my top priorities for the coming year?

1) Build up my Sea Elf army 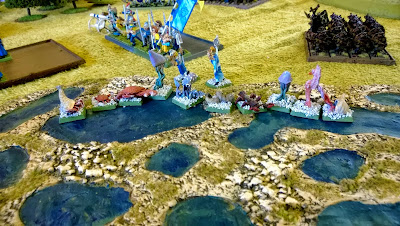 The first thing I did when I got back into this hobby was to paint up sea elves. This year, I want to build them up to a sizeable force in their own right. In terms of what I own but have yet to paint up: I have archers for the ship's company, wardancers, and a unit of Lothern City Guard who I think will work well in this force; in terms of what I still need to buy, I'm looking for another bolt thrower, and also pondering whether I could incorporate some of White Knight's wonderful sea elves.

2) Send my Sea Elves off to sea
With plans afoot for naval battles at BOYL15, I need to get some suitable boats for my sea elves to conquer the waves.

3) Take a journey to the East
I want to try and organise a game with an Eastern feel at BOYL15, exploring some of the lesser known territory of the Warhammer world and getting people to bring Cathayans, Nipponese, eastern-looking Hobgoblins, that sort of thing. With that in mind, I've been collecting minitures with an oriental feel, some of which will also see usage in games like Ronin and Fistful of Kung Fu. 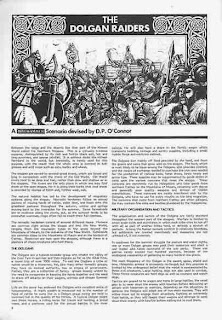 Related to the above goal, I want to collect a force of Dolgan steppe warriors and face off against Hobgoblins in this classic scenario from the Second Citadel Journal. I have a handful of Mongol-looking old citadel minis, and so I'm looking for suitable proxies for the rest of the army.

5) Continue to collect for McDeath - without breaking the bank
I'm still going to pick up McDeath minis when I see them and when they're not expensive, but a lot of the rank and file I want to collect for McDeath will be suitable proxies. Last year, I picked up plenty of clansmen to go with the old citadel; this year my priority is to collect and paint militant dwarf miners to fight alongside Arka Zargul.

6) Paint all of the Heroes for Dungeonquest
Well, maybe I'll get around to it this year, eh?
Posted by robotforaday at 16:21