Where the rivers run dry, where there is only drought and despair and the bones of our livestock... There it is said that on the driest days, the days without hope, the parched lands cough up their secrets and cough up their dead. Mysterious creatures - creatures who had been noble, wise even, in some long past life - rise stripped of flesh, rendered hideous and viscious by their restless sleep. It is a terrible place. 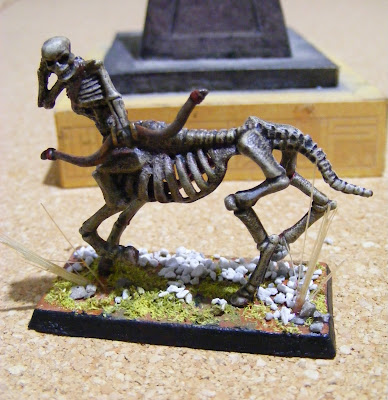 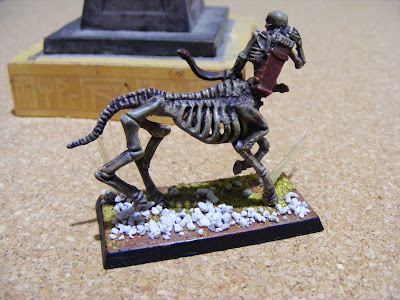 In Oldhammer's calendar, December is traditionally "Deadcember" and is a month for painting your undead. (Some might think I've quite enough of death in the last month, but anyway...) Now, I don't know if I'll get around to anything else specifically Undead related this month, so this is technically cheating, as it wasn't a project for Deadcember, but my November entry for Jamie Loft's Monthly White Dwarf Painting Challenge. Every month a WD is selected and the challenge is to paint a model that appears in it or is inspired by it. November's selection was WD119. I took inspiration from the Undead Centaur conversion by Andy Warwick on page 56 and went about creating my own skeleton centaur.

The human torso comes from a Reaper Warlord skeleton archer, the horse is a plastic 4th/5th ed skeleton steed. It's hard trying to work out how to make a mythological skeleton appear realistically dynamic. After extensive google image and ebay searching, the Reaper skelly seemed the best option, reaching for his quiver, although it involved a lot of cutting away.

Centaur anatomy is troubling at the best of times. What are they doing with both human and horse ribcages? How can they have so many limbs? Stripping the centaur back to the skeleton makes these questions of anatomy all the more baffling. But as long as you don't look too close, I think the unity of the conversion works. Just about. A fun project, although the posing and sticking together was nowhere near as simple as I thought it would be.
Posted by robotforaday at 08:48