With the arrival of a hospital bed, my mother has now moved into the room I've been using as an office. In the course of moving various books and papers out of the room, I found this tiny little gamebook that came free when I bought a copy of Miniature Wargames in (I believe) 2002. I can't remember the issue it came with and no amount of google searching has revealed anything more about it. I wonder if anyone else can shed any light on it - mine can't be the only extant copy, surely? 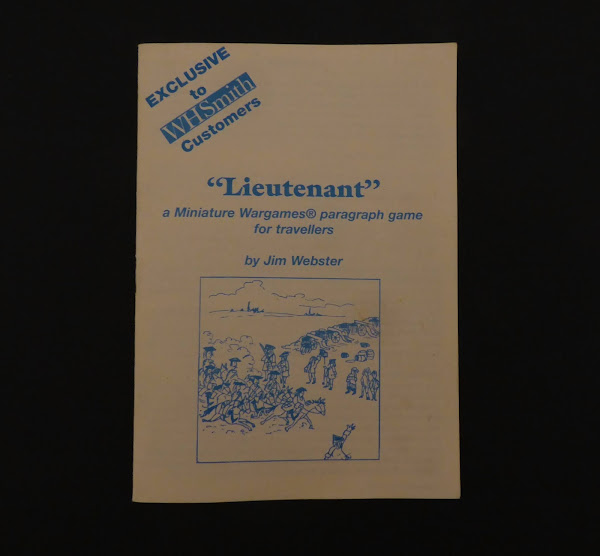 I don't remember ever playing it at the time, so to try and get into a more relaxed mood for Christmas I played it through a few times today.

It's set, broadly speaking, in the Napoleonic era, and you're a Lieutenant of Horse in an unspecified regiment of the English army. You allocate points to a range of abilities, spanning the range of what an "Officer and Gentleman" should do: Dancing, Horsemanship, German Language, French Language, Leadership, Long firearm, Pistol shooting, Polite Conversation, and Swordsmanship. The game mechanic is pretty simple; at certain points in the game you're asked to roll a d6 against a particular ability in order to perform tasks.

The introduction states: "Your regiment is stationed in the Low Countries, the army is besieging a town of some note and the cavalry are of course providing a screen to cover the army and detect any relieving force. Somewhere to the North there are allied forces which are supposed to be marching to your aid. Your regiment is thrust out some distance from the army and is supposed to be covering a probably axis of the enemy advance. Understrength, as always, the troop is down to a bare 50 men commanded by the Captain, able seconded (or so you like to think) by your good self. The Captain is somewhat indisposed, nothing worse than a stinking head cold, but enough to ensure that when he wants a patrol to head out on a miserable afternoon, it is your good self that will lead it. He wants you to take a Corporal of Horse and nine troopers and head South East to check that there is still no sign of enemy forces in that direction." You make a number of choices that determine the success (or not) of your mission. 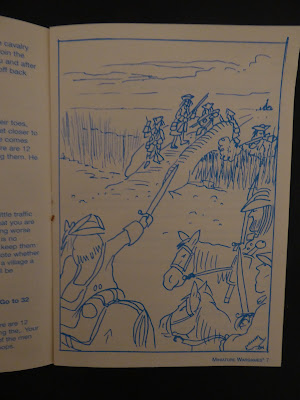 Weighing in at only 16 pages and 40 paragraphs (42 if you count the introduction and end, which are properly speaking part of the game), it's a tiny gamebook. Considering this, it has remarkable replay value, as depending on the choices made, it's quite possible to have discovered very different things, to have returned to camp completely misunderstanding the situation, or ideally have achieved one or more distinct strategic objectives (or blundered through and failed miserably). It's written in such a way that you can think you've done something truly heroic - until you return to camp and discover the extent of your cock-up. Which is quite an achievement for Jim Webster to have squeezed all that into such a micro-adventure.

I actually played it 4 times through. Using the simple skill allocation system, each time I generated a distinct personality of officer to try and adopt a different mindset when making decisions.
Stephen the Scholar: a young man with the benefit of a classical education, and who had been on the path towards Holy Orders until circumstances took a very different turn. A talented linguist, but cautious in the face of the enemy and even more cautious in the presence of the ladies. His caution meant that he didn't blunder and completely misunderstand the situation, but neither did he see much action.

Samson the Sportsman: brash, rides like he's with the boxing day hunt. Rode straight into danger and damn near got himself killed.

Samuel the Sharpshooter: a master of the pistol and rifle, but solitary, finding it easier to commune with his weaponry than communicate with his men. This was to be his undoing.

At the end of the 4 playthroughs I had pretty much exhausted the available pathways through. Looking at the final page which gives you the information to evaluate how well you've done, I found myself wondering whether something's broken because it seems impossible to achieve the best combination of outcomes (unless I'm very mistaken - which is quite possible - the pathway to one strategic success seems to preclude the other). But even so, there are a range of outcomes and it's an interesting opportunity to walk in the boots of a Napoleonic-era junior officer. 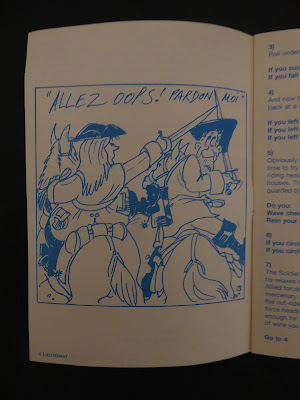 As somebody who enjoys the narrative and roleplaying aspect of wargames, it really got me thinking about how little I reflect on the personalities of junior officers in the games I play. It's all very well being the big general and taking a omniscient overview of the battlefield, but will the cavalry really press home their charge under the leadership of the bookish Stephen? Will Samson forget that he's not on the playing fields anymore and unwisely decide to throw caution to the wind? So this little adventure has definitely offered me some inspiration. I look forward to experimenting a bit more with unit leader's personalities in the next big game I play.
Posted by robotforaday at 16:45