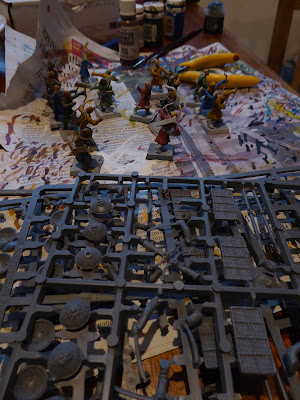 Not a particularly lengthy or inspiring or helpful post today, but thought I should check in and let people know I'm still alive and getting ready for BOYL.

My big project for BOYL is to finally get the Dolgan Raiders done - and it's going ok, but one of the sticking points has been the archers. Years ago, I saw the Fireforge Steppe Warriors box in a model railway shop in Chester and thought "aha! Dolgan warriors on the cheap!" - which seemed like an inspired idea at the time. In the end, I'm only using them for the archers (I'm using different minis - metal minis - for the swordsmen, characters etc.) but it's my first in-depth experience with trying to assemble plastic toy soldiers, and bloody hell it sucks a lot of the joy out of things and is probably one of the reasons this whole project has taken so long. 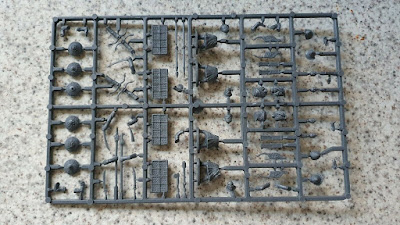 Look, it's a really good sprue. They're nice minis. There's lots of bits and pieces, loads of options. Each mini ends up looking unique. But with legs, torso, each arm separate, the head, the quiver, and then any hat and hair still to stick on... that's a lot of cutting and gluing. Some people are probably used to it and think it's a great part of the hobby. Stop whining, you say. Fair enough, I'm just not like you, that's all! Give me a single part metal mini and that's me happy. Laziness? Maybe.

I do understand that having sprues means that you can kitbash, it's great for creativity, I get all that. I believe it. I've seen some wonderful things. And yes, the minis are cheap.

Kitbashers, I salute you. It's just a bit faffy for me. Hopefully finish these tomorrow and then I can get onto the last few metal minis for the army. I'll post everything here when it's ready and I'm not in a pre-BOYL painting flap.
Posted by robotforaday at 13:00