I'm holding out for a hero

Bit of a silent stretch on the blog - never got round to posting about BOYL (oops) so will have to do some retrospective posts, and been extremely busy working since then. But thought I should try and get back into the swing of things with the first mini I've painted since August.

Snickit has instituted an "Odds and Sods Oldhammer Painting Challenge" over on facebook to get us painting up some of the things that have been languishing in our leadpile. Each month there's a theme for us to paint, and the theme for the month of October was heroes. Now, I've got a lot of character models but for this I wanted a model that really looked the part and really had that suitably heroic feel to it. After digging through my unpainted lead I found this fantastic Old School Miniatures halfling sculpt by Drew Day Williams. Definitely a hero for the ages! 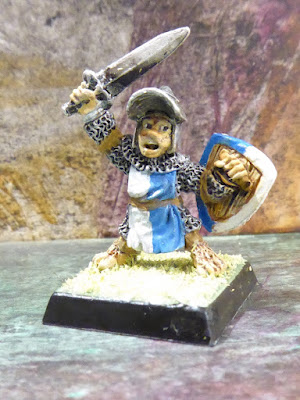 As a young halfling, Mike's first encounter with knights was when a bunch of them, while hunting, rode their horses through the village's communal vegetable patch, destroying much of the season's harvest of cabbages. From that day forward, Mike swore he would become a knight - but one who acted with respect for even the humblest halfling, never riding through their gardens without proper care or regard. The kind of knight who would never disdain any creature as too small or common, but instead would stand ready to be a hero for the downtrodden. 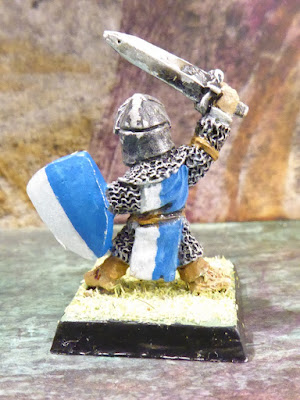 A rather crude paintjob I readily admit, but I think a reasonably effective one all the same, hopefully bringing out some of the character of this true hero.
Posted by robotforaday at 13:41