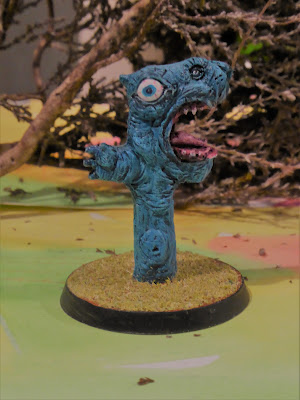 Another few months of silence on this blog. Partly that's just general laziness, partly it's just the fact that life has been coming pretty thick and fast.

Of course, one of the things that makes blogging a bit more of a chore is that the energy in Oldhammer has moved away from the blogosphere and towards other forms of social media. I honestly think that's a bit of a shame. True, blogging is pretty newfangled itself compared to the lead we push around - the most appropriate medium for what we do would probably be something like a mimeographed newsletter. But still, blogging gives the time and space to record your projects, share ideas, and then for people to be able to find and look back on them in the future. Compare and contrast with facebook with its deluge of pictures and endlessly looping chatter, where anything more than a couple of days old becomes hard to find.

The thing is, Oldhammer kind of revels in being SLOW: pottering around, beer in hand, admiring things, chatting, and occasionally pushing some toy soldiers across a table. It's about time spent enjoying life with friends, far removed from the "get a couple of games in quick" mentality that modern worklife forces our leisure into. For this reason, social media like facebook doesn't seem like a very good fit. That kind of social media is about instant gratification and short attention spans. And all too often about the kind of bad tempered reflex that comes from not taking time to reflect. Given that it's taken some of our models 40 years to see paint, you'd think we could take a little bit longer to think before we speak!

Ironically, the key reason I'm on facebook these days IS Oldhammer. It's how we plan for the next Little Albion games, think about what we'll do at BOYL, etc. And even though I much prefer the old-style Oldhammer Forum I do like looking at the pretty pictures. But I'm not very good on social media - it's led to some of the bigger fuck ups in my life in recent years. Even in Oldhammer my time as a moderator was a clusterfuck, and I've fallen out with some people there's been no need to fall out with.

Things change. The centre of gravity moves. But I hope there's life in blogging yet, in people being able to share ideas and not just pictures, in things that can be read years later and not lost the second you scroll past them. Let's hope there's more to Oldhammer than just feeding the facebook monster.

And did I write this just so I could show off the Scibor Facebook Monster I finally painted - the one they released when they reached 10,000 likes, and which I got free years when I was buying some shields from them? Of course I did!
Posted by robotforaday at 13:55

Email ThisBlogThis!Share to TwitterShare to FacebookShare to Pinterest
Labels: But what is Oldhammer?